Brussels: Refugees wait for asylum in the heart of Europe | Europe| News and current affairs from around the continent | DW | 28.09.2017

Brussels: Refugees wait for asylum in the heart of Europe

European refugee policy is directed out of Brussels – a city where the negative consequences of that policy are on display. DW's Daniel Bellut reports from the Belgian capital's Parc Maximilien. 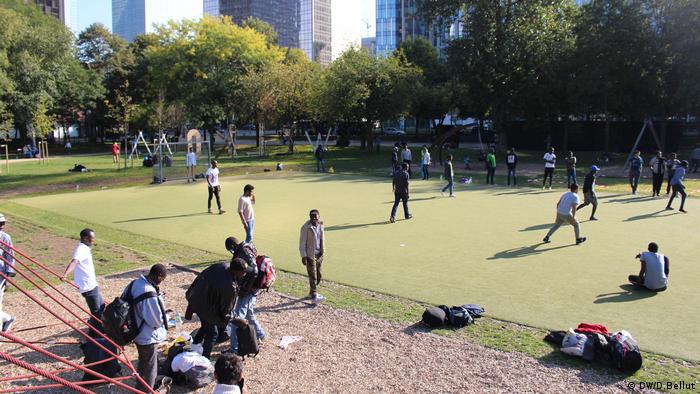 Parc Maximilien stands out against a cold backdrop of office buildings in north Brussels. The park is lovingly landscaped with wide swaths of grass, rows of trees, castles to climb on and colorful swings.

But for the last few years, Parc Maximilien has become a refuge for asylum seekers from around Africa, mostly Sudan, Eritrea and Ethiopia. For many, the desired destination is the UK. They pass the nights in miserable conditions: 100 or so sleep under a garage overhang, using discarded cartons and plastic packaging to keep the cold out of their damp, used sleeping bags. The air smells of urine.

Early in the morning, some people have started the day. Children kick a deflated soccer ball around while others wash themselves in a fountain's ice-cold water. The mood is gloomy. Many people sit around on steps and benches, empty gazes on their faces.

One Brussels resident trying to help is Nabil Moujahid. He is originally from Morocco and now lives near the park. He tries to visit every other day, and the people living there seem to recognize him. His Arabic is important for the migrants here, many of whom speak neither English nor French. 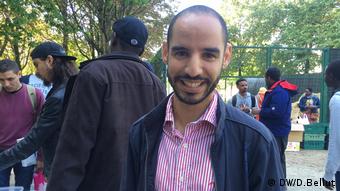 Moudjahid is trying to help the refugees living in Parc Maximilien

"You haven't seen anything," he says. "The people here are completely exhausted. The hygienic conditions are a disaster. There have been several scabies outbreaks. They are exhausted from police raids nearly every morning, which force them to run away."

Park Maximilien is well known to the Belgian public. The country's hardline secretary of state for asylum and migration, Theo Francken, has little patience for the refugees here, many of whom hope to hope to gain asylum in a different country. "Twenty-nine Sudanese sent back to their country of arrival without a problem," Francken tweeted recently.

Following a police raid that ended with several arrests, he tweeted he would continue "cleaning" the park. Opponents accused him of using "Nazi methods" when it came to light that Sudanese officials were used to identify and deport migrants.

Moujahid believes the Sudan accusation is simply a rumor. "Everything here is just scare tactics," he said. "The police arrive in the morning, arrest a few people who are held for a few hours, and then they are released. I think the fearmongering is very effective." 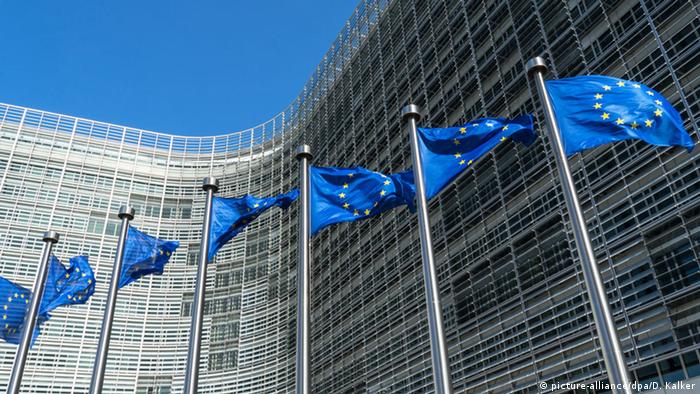 To the UK at any price

An older woman with a friendly face is handing out food at the park entrance. A police car rolls by and the young African refugees watch it with concern until it is out of sight. The feeling of mistrust extends to curious journalists, though Moujahid's presence helps mollify their suspicions. They begin to open up.

"And they wonder why we don't apply for asylum here," says a young man from Khartoum. "Look how the police treat us. We aren't welcome here at all."

They were left alone in Italy, he added.

More of the man's fellow refugees come forward to explain why there is so much interest in reaching the UK, even though the odds for asylum are relatively good in Belgium.

"We have a better chance for a good life in the UK. We already have many friends there and there is a large Sudanesee community. It's also easier to work off the books," one says.

"Chances of successful asylum are higher there," says another.

But Moujahid shakes his head: "You're ill informed," he says. "Your chances are better here." 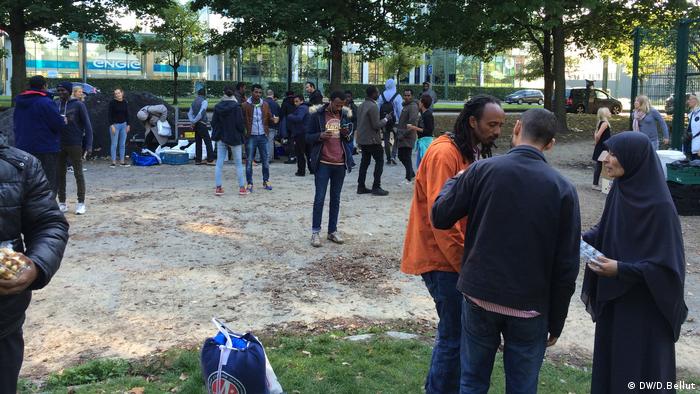 The center of EU power is not far away from the park. It is the place is where the bloc's asylum policy is formulated. According to the Dublin Regulation, asylum-seekers have to be registered in the country where they first arrive. Then the asylum process begins. They are to receive care and accommodation while waiting, which can take years. If successful, another EU member state, such as the UK, could theoretically take in the refugee. That is unlikely, however, even when family members already reside in that country.

In reality, many of the refugees in Belgium were not registered in Italy, where they first arrived, but sent onwards into the EU. Nor does the system appear suited for those seeking to live in a European country for economic or family reasons.

There is commotion in the park. A young Eritrean girl rushes in with news of her friend's arrival in the UK. The friend comes over the speaker of the girl's phone, telling everyone how she was successfully smuggled to London. There are words of congratulations, and also questions: "How is it there? Have you found work already? Was the trip dangerous?"

News quickly spreads across the park and the mood turns upbeat. Some are smiling as they make their way to the food table where hot soup is waiting for them.