British ex-PM Tony Blair: ′You′ve got a Brexit that′s pointless, and one that′s painful. The choice is not a good one.′ | Europe | News and current affairs from around the continent | DW | 22.01.2019

Speaking with DW in Davos, former British Prime Minister Tony Blair has called a new vote "the sensible thing in this situation." He said a "no-deal Brexit would be catastrophic for everyone." 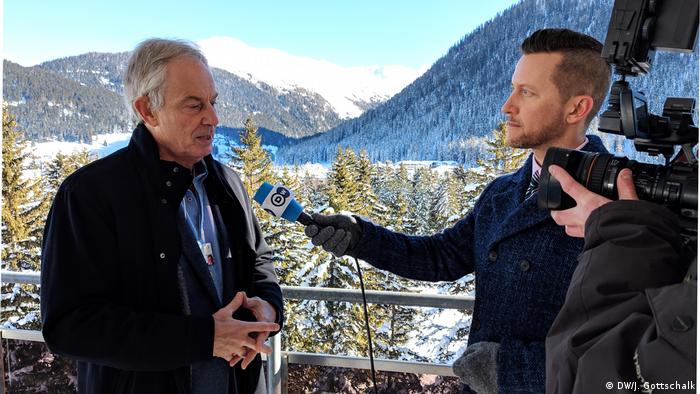 Speaking with DW at the World Economic Forum in Davos, Switzerland, former British Prime Minister Tony Blair again made the case for holding a second referendum on Brexit. Blair said of the current parliamentary impasse, "The process is a mess," adding, "The sensible thing in this situation is to go back to the people."

Asked how he thought a second Brexit referendum would change the situation, Blair said, "It would change it because it would give us a conclusive result."

He brushed aside criticism that a second vote would "damage democracy" by saying: "We're going back to the people, we're not asking anyone else, we're asking them. We've had 30 months of negotiation, there's a much clearer knowledge now of what Brexit really means. There's a much greater understanding of all the issues around it."

Asked what kind of Brexit he thought might eventually come about, Blair said, "Obviously a no-deal Brexit would be catastrophic for everyone."

'A Brexit that's pointless, and one that's painful'

Speaking of the two versions of Brexit currently being discussed, Blair was critical of both. He pointed out that if the UK remains in the EU customs union or single market — for instance with the so-called Norway model — it will have to abide by the EU's rules, yet would not have any say over them. He said that the third-country trading status sought by Brexit advocates would "disrupt British business that for four-and-a-half decades has been doing business, creating relationships, trading, investing on the basis that we're part of the European trading system."

Blair said of the two: "So you've got a Brexit that's pointless, and one that's painful. The choice is not a good one."

Addressing the current draft Withdrawal Agreement with the EU, voted down overwhelmingly last week in the House of Commons, Blair said, "The trouble with the deal Mrs. May's putting forward, is that it's completely ambiguous. I think it's not wise, either for Europe or for Britain, to leave without knowing what the future is."

Blair cited immigration and fears of economic exclusion as a result of globalization as the major underlying problems that led to Brexit in the first place: "You have to deal with the underlying issues. The trouble is that Brexit itself is not really an answer to any of these issues. So this is the dilemma that Britain's in, and we've got to find our way out of it."

'This is about Europe, too'

The former prime minister, with whom all of his colleagues in that elite club, both liberal and conservative, agree — with the exception of David Cameron, whose political career ended ignominiously after he lost the Brexit referendum in an effort to appease hardliners in his Conservative party — said that he would like to implore upon listeners, "This is about Europe, too."

"We need to realize, both of us, Europeans and British, our future should be together."