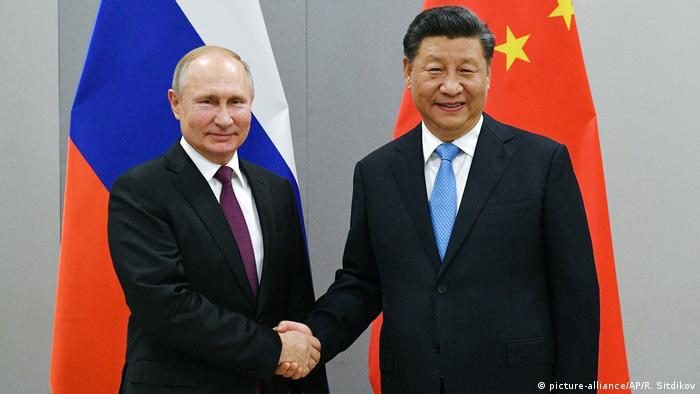 The leaders of Brazil, Russia, India, China and South Africa also called for increased trade between the countries.

China is currently involved in a trade dispute with the United States and President Xi Jinping told the summit in Brazil: "Protectionist and bullying counter-currents bring shocks to international trade, adding to downward pressure on the world economy."

Read more: Opinion: For Germany, India is a partner with potential

Russian President Vladimir Putin made some gloomy predictions about global growth rates, citing International Monetary Fund forecasts, but said that the BRICS are doing their best to fend off the trend. He also blamed politically motivated protectionism for the downturn.

"The BRICS countries are making considerable contributions to support growth," he said.

"The global economy has been influenced by the wide usage of unfair competition in trade, unilateral sanctions, including those that are politically motivated, and protectionism is flourishing."

BRICS wants to tap more into own potential

Diamonds and oranges: Five countries that jointly represent at least 40 per cent of the world's people and GDP discussed details of economic collaboration at the 10th BRICS summit in South Africa. (26.07.2018)

The leaders of Brazil, Russia, India, China and South Africa have a series of ambitious plans for the meeting in Johannesburg. (24.07.2018)