The British prime minister has told lawmakers that a Brexit deal is still "achievable." Yet German Chancellor Angela Merkel warned time was running out over the Irish border question. 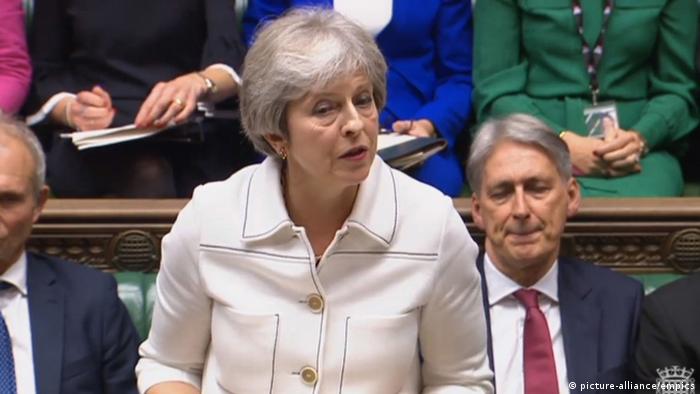 UK Prime Minister Theresa May on Monday said a "backstop" arrangement had been proposed that would effectively keep Britain within European arrangements until 2022.

May ruled out a temporary backstop that would involve customs divergence between the UK and Northern Ireland— effectively creating a customs border in the Irish Sea. This had been proposed during talks between UK and EU negotiators ahead of a summit of EU leaders starting Wednesday.

"Even with the progress we’ve made, the EU still requires a backstop to the backstop – effectively an insurance policy for the insurance policy, and they want this to be the Northern Ireland-only solution that they’d previously proposed," May told the UK parliament.

"We've been clear we won't agree to anything that affects the integrity of our United Kingdom," said May, stressing that the situation would not be long term.

"I want to be able to look the British people in the eye and say this backstop is only meant to be a temporary solution."

Although May floated the end of 2021 as a possible date for leaving the customs arrangement, she did not set it as an official deadline.

May — who was under pressure from her Northern Irish allies the Democratic Unionist Party (DUP) to rule out a Northern Ireland only solution — was speaking ahead of talks with European Union head of government, beginning on Wednesday. Leaders from the other 27 member states are to decide upon whether to step up talks on a future trade agreement between the UK and the EU.

Ahead of the summit, German Chancellor Angela Merkel warned that a deal appeared to be increasingly difficult because of the border issue. "If it doesn't work out this week, we must continue negotiating, that is clear, but time is pressing," she added.

EU and UK negotiators had been expected to reach a tentative agreement on Sunday, but the talks reached an impasse and broke down.

Among the major sticking points is the possibility of a hard border on the island of Ireland. Both sides have said they do not want customs checks and infrastructure between Northern Ireland and the Republic of Ireland, but different customs arrangements between an Ireland inside the EU and a UK outside of the bloc could make such a hard border necessary.

Of major concern is the possibility that a hardened border could inflame old tensions between nationalists, who want Northern Ireland to be part of Ireland, and unionists who want it to stay in the UK. The split led to a period of violence that lasted more than 30 years, known as the "Troubles," which only ended in 1998 and claimed more than 3,700 lives.

EU negotiator Michel Barnier had proposed that Northern Ireland stay within the European economic space until the end of 2020, while the rest of the UK would leave — an agreement that would be known as the "backstop." Such an arrangement would mean customs checks between the Northern Ireland and the UK. That has raised hackles within the tiny Northern Irish Democratic Unionist Party (DUP), upon which Theresa May relies for a majority in the UK parliament.

The DUP, which insists that Northern Ireland should be treated like the rest of the UK, has even threatened to vote down the government's forthcoming budget if Theresa May gives way to Brussels on the issue.

As a shot across the bow, the party abstained from a parliamentary vote on a government agriculture bill to remind May and her Cabinet that it would vote against them if it were thought to be a "necessary sanction." Although that bill passed anyway, voting against the budget would be likely to have a greater impact and could trigger a confidence motion against May, possibly resulting in a general election.