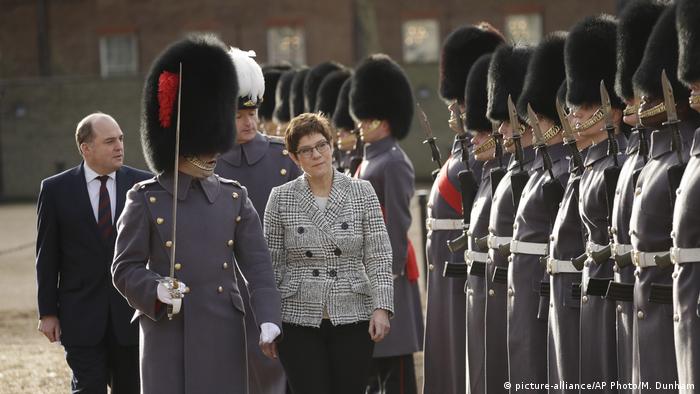 German Defense Minister Annegret Kramp-Karrenbauer was in London on Thursday for talks with her British counterpart, Ben Wallace. Issues such as Brexit, collective military missions and Iran were high on the agenda.

The ministers discussed the 2015 Iran nuclear deal (JCPOA), the agreement negotiated by Germany, Great Britain and France (E3), along with the United States, China and Russia, which was designed to stymie the Islamic Republic's nuclear program in return for sanctions relief.

The deal, though, is hanging by a thread, and has been growing ever weaker since US President Donald Trump announced the decision to withdraw from the landmark agreement in May 2018. Iran is pushing the E3 to break from the US if the nations are serious about maintaining the JCPOA.

Kramp-Karrenbauer said she hoped that the UK would continue to work with Germany and France in the context of NATO and the E3 group.

France and Germany are currently wrestling with President Trump to deal with the Iran crisis. Germany will not support Trump's "course of maximum pressure" against Iran, said Kramp-Karrenbauer.

British Prime Minister Boris Johnson had called for the nuclear deal negotiated by the E3 to be replaced by a new US-led treaty.

Kramp-Karrenbauer said Trump had threatened to impose punitive tariffs on car imports if Germany, France and Great Britain continued to support the Iran nuclear deal. Germany's defense minister backed up a report in The Washington Post that the US would impose a 25% levy as she told reporters: "This expression or threat, as you will, does exist."

The question of how the EU and Great Britain want to work together in terms of security policy after Brexit was also discussed by Kramp-Karrenbauer and Wallace.

With the UK set to leave the bloc on January 31, the German defense minister expects the UK to form closer ties with the US, particularly in terms of security. She suggested Britain wanted to take "a very independent position" that "relies on traditionally good and close relations with the United States."

On Thursday evening, Kramp-Karrenbauer will give a speech on Brexit and Europe at the London School of Economics.