The deal, concluded earlier this week, sees the UK leaving the bloc with unprecedented tariff-free access to the single market of 450 million consumers. Britain has said it wants to maintain close ties with the EU. 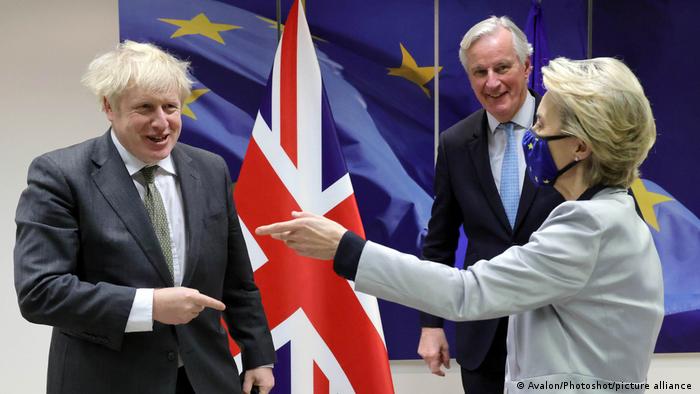 Both sides expressed relief at finally reaching an agreement

Britain published the text of its trade agreement with the European Union on Saturday, just five days before the end of the Brexit transition period that was meant to smooth its departure from one of the world's biggest trading blocs.

The document, consisting of 1,246 pages, also contains details regarding the future relationship on nuclear energy law enforcement and dispute settlement, as well as a series of joint declarations.

The two sides sealed the deal on Thursday after months of tense negotiations following the UK's formal departure from the EU in January 2020.

In a foreword to the summary of the publication, British Prime Minister Boris Johnson wrote: "While we made our fair share of compromises during the negotiations, we never wavered from the goal of restoring national sovereignty — the central purpose of leaving the EU."

"I have always said that Brexit was not an end but a beginning: the start of a new era," he added.

The last-minute deal will enable Britain to have a "special relationship" with the EU, according to British Cabinet Minister Michael Gove, using a term traditionally used to describe the UK's close ties with the United States.

The agreement means the two sides can leave the "ugly" Brexit process behind and embark on a new, more hopeful era, Gove wrote in a guest commentary in The Times published on Saturday.

EU ambassadors were briefed on the deal's contents on Friday by Michel Barnier, who led Brussels' negotiating team in the talks with the UK.

The British Parliament will get to vote on the trade deal on December 30, just one day before the Brexit transition period ends. It is expected to pass with ease. The European Parliament will hold a ballot on the agreement in January.

Britain's Queen Elizabeth II has made the challenges of a year marked by the pandemic the focus of her yearly Christmas Day speech. While praising the solidarity shown, she said some people just want a hug.

After months of fraught negotiations, Britain and the EU have pulled off a historic trade deal. But it still faces several hurdles in the UK and EU parliaments.