After months of fraught negotiations, Britain and the EU have pulled off a historic trade deal. But it still faces several hurdles in the UK and EU parliaments.

Britain and the European Union agreed to a "historic" free trade agreement on Thursday, a week before the transition period following the UK's exit from the bloc was set to end.

Now that an agreement has been reached, it must now be put into law. Parliaments in both the UK and Europe must sign off on the deal, and due to the short time frame, the deal will not be fully ratified until next year. In other words, it may be applied provisionally from January 1.

"The process isn't done yet," David McAllister, chair of the European Parliament Foreign Affairs Committee and a German with Scottish roots, told DW on Thursday.

What next for the UK?

The British government has said it would summon MPs back to parliament on December 30 to vote on the deal. MPs are still waiting for the full text of the agreement, which UK chief Brexit negotiator David Frost said would be published soon.

British lawmakers are likely to be unhappy with the rushed approval process. Significant legislation typically takes months to pass through parliament and involves line-by-line scrutiny.

UK Prime Minister Boris Johnson may still face a revolt from Brexiteers in his ruling Conservative Party who don't think the deal offers a clean enough break from Brussels.

But he has an 80 seat majority in the lower parliamentary chamber, the House of Commons, and the opposition Labour party has said it would back the deal.

Labour leader Keir Starmer said the agreement was thin, but it was better than no deal at all.

What next for the EU?

The European Commission is set to send the draft text to the remaining 27 European member states. The EU's chief Brexit negotiator Michel Barnier briefed EU ambassadors on Friday on the deal in an extraordinary meeting, a spokesman for the German EU presidency confirmed on Twitter.

The diplomats are expected to take two or three days to analyze the agreement. The member states will then have to approve the outcome of the Brexit negotiations and the trade deal's provisional implementation.

Because of the short time frame, the EU parliament will not be able to fully ratify the agreement until next year.

Will EU parliament vote down the deal?

It could in theory, even if member states commit to the provisional implementation of the deal.

"This would be an option," McAllister told DW. "But I don't believe this will happen."

Though he hasn't seen the full text, McAllister said the deal was "a fair and balanced agreement. It protects the interests of the European Union, of our citizens and businesses.

"There will be some critical questions asked in the European parliament," he continued. "This is absolutely normal. In the end, it's about giving consent on a yes or no vote."

What changes on January 1?

The 11-month transition period for Britain's departure from the EU will formally end. The UK will no longer be part of the bloc's single market or customs union and therefore bound by its rules and regulations.

However, the free trade deal, if provisionally approved by EU member states, ensures that there will be no tariffs or quotas on UK and EU goods that move between the two sides. 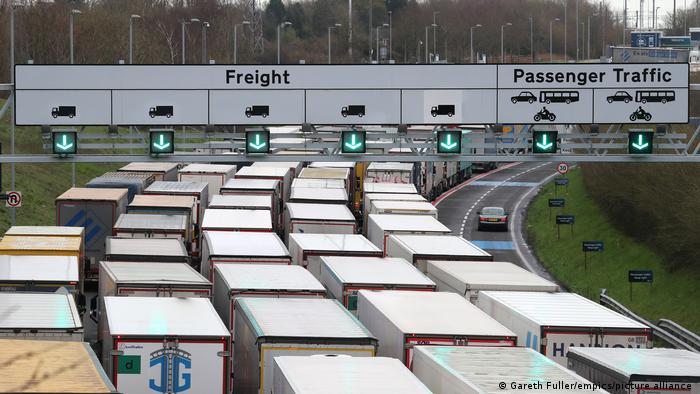 But businesses will nonetheless face new red tape for imports and exports. And since the deal between the UK and EU was reached a week before the year's end, people and businesses don't have much time to prepare for changes coming on January 1.

Meanwhile, citizens of the UK and EU will no longer be able to enjoy free movement to live, work and study between the two areas.

Britons traveling to the EU's Schengen passport-free zone can only stay for 90 days in every 180-day period. EU nationals can visit the UK for up to 180 days.

What are the long-term effects?

The EU is entering uncharted waters as Britain becomes the first country to leave the bloc.

With the trade agreement, Britain will enjoy some of the same benefits it did as a member of the EU. But leaving the EU's single market and customs union will undoubtedly have a negative impact on Britain's economy.

The independent Office for Budget Responsibility recently suggested that Britain's gross domestic product (GDP), in the long run, will be 4% lower than if the UK had remained in the bloc.

But the UK government says as well as the new EU deal, it has also concluded trade deals with 58 other countries or territories.

For the UK, 2020 has been a year to forget. Through it all, the prime minister's cavalier approach to COVID-19 and Brexit has beggared belief, says DW's Rob Mudge.