Brazil's Supreme Court has turned down a request to free jailed ex-President Luiz Inacio Lula da Silva following allegations the judge who convicted him was biased. Lula's lawyers say he was denied a fair trial. 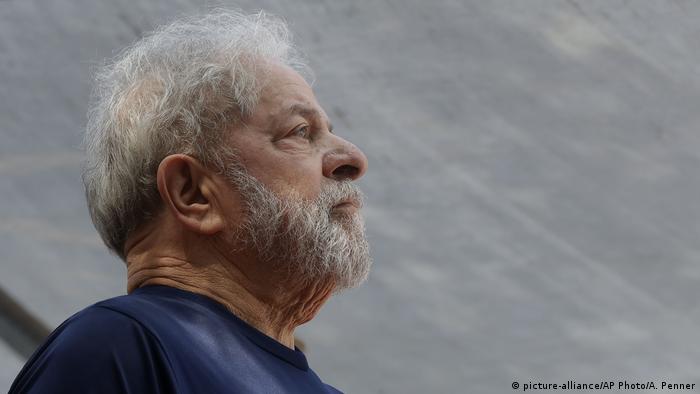 The leftist ex-leader was jailed in 2018 on charges of corruption and money laundering.

His defense lawyers argue the verdict should be overturned and Lula released because of accusations of inappropriate conduct against the convicting justice in the case. The implicated judge was Sergio Moro, currently the justice minister in President Jair Bolsonaro's government.

The top court is not expected to make a decision on that petition until later in the year. On Tuesday, one of the judges had suggested Lula be released in the meantime, but that request was rejected by the panel.

Brazil's Lula bows out of race

Investigative website The Intercept earlier this month published leaked documents and text messages that it said show Moro offering improper guidance to prosecutors seeking Lula's conviction. Lula's lawyers argue Moro was not impartial, and was working to block Lula and his Workers' Party from returning to power. The justice minister denies wrongdoing and has ignored calls for his resignation.

Lula served as Brazil's president from 2003 to 2010, and left office with an approval rating of 87%  — albeit long before major corruption scandals involving his government emerged. His imprisonment meant he was barred from seeking the presidency again in October's election. Polls favored Lula at the time of his exclusion from the race, although the right-wing populist Bolsonaro subsequently made major gains and went on to claim a relatively comfortable victory.

He was convicted in July 2017 after being found guilty of giving a construction company lucrative government contracts in exchange for a beachfront penthouse. He was one of dozens of high-profile figures in Brazil embroiled in the corruption scandal at state oil firm Petrobras.

The 73-year-old, who denies all charges, began serving a 12-year sentence in April 2018. Earlier this year, Brazil's second-highest court reduced his sentence to eight years and 10 months, but rejected an appeal to have the conviction annulled.

A Brazilian court has rejected the latest appeal of Luiz Inacio Lula da Silva against a corruption conviction. But the former president, leading the polls ahead of October's election, is likely to play for more time. (27.03.2018)