The Bolsonaro family use social media to present their life as a reality soap opera. Their carefully crafted, highly-watched presidential telenovela is setting the narrative and circumventing traditional media. 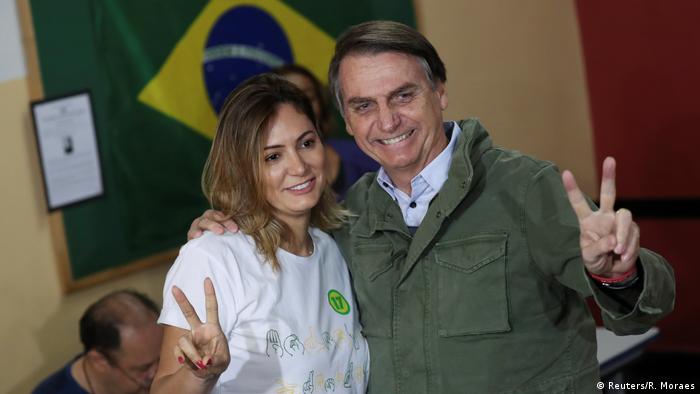 On the sixth day, the Messia[s] reclines barefoot on the sofa of the Granja do Torto presidential residence. Next to him sits the faithful family dog, Beretta. His glasses casually perched upon his nose, the master browses social media on his smartphone.

Several times a day, Brazilian President Jair Messias Bolsonaro communicates with posts on his social media channels or those of his three eldest sons, all of whom are politically active. They amass a combined 15 million followers on Facebook, 16 million on Instagram, and 6 million on Twitter.  The relaxed sofa scene, posted on Instagram during Bolsonaro's first week in office, reached several millions and garnered over a million likes.

Afonso Benites, a journalist for the Spanish-language daily El Pais, told DW he is using Twitter more than ever to cover the Bolsonaro presidency: “With this government, you can't miss a beat." he added. Bolsonaro's election campaign was won through social media, and now it is used for his official communication as president.

Bolsonaro's modus operandi is similar to that of US President Donald Trump, who celebrated the fellow populist's victory — except that unlike his counterpart, he also utilizes social media to parade his private life. Trump has already had the media doing that for him for decades. Benites even goes so far to brand the Bolsonaro family as the "tropical Kardashians."

"A lot of people say they voted for him because he's such a common personality. A man like us, they say. It may appear straightforward, but all of it is very well thought out, every step calculated." He chalks up Bolsonaro’s victory to the electorate liking a fresh face: "I think the Brazilians were tired of the traditional, normal politicians."

There is, of course, an element of curiosity at play. "We Brazilians think that it's great to gain an insight into the private lives of the powerful. And when it comes to politicians, it's even more exciting, because normally there are no such glimpses," political scientist Marco Aurelio Nogueira told DW.

"But Bolsonaro, with his exuberant personality, knows no limits. He does not distinguish between the private and the public. And he says whatever comes to his mind."

On top of all this, his life has the necessary attributes: Three adult sons from previous marriages, displaying their loyalty. And his young, camera-ready wife Michelle, who has offered up public displays of affection for her decades-older husband, and who broke with protocol during Bolsonaro's inauguration to deliver a speech in sign language.

"You have a perfect cast for a great telenovela," believes Nogueira. "There's the prince with his princess and the three crazy kids who always have to be pulled into line. And with Michelle, the government gained a human, big-hearted image. These are all messages that are sent to the public."

Bolsonaro functions so well as an influencer because he is so similar to his followers: just an average man, journalist Eliane Brum told DW. "We all know people like Bolsonaro in our environment," says Brum, "neighbors, friends, and relatives. Bolsonaros are everywhere. And thanks to the internet, we've truly gotten to know this person behind the scenes."

Bolsonaro presents himself as representing people — mostly white and mostly male — who feel powerless in the modern world, deprived of his freedoms by feminism and the politically correct.

One only need to look at his inaugural address, in which he claimed that he wanted to "free Brazil from politically correct discourse." Brum says this sentiment sums up why he was elected: "Bolsonaro represents the Brazilian who feels squashed into the corner," a figure who wants to fight back and liberate himself.

On social media, the Bolsonaros present themselves as a conspiratorial community of men with no regard for decorum and etiquette, who stand at the shooting range, weapons in hand, and who posture themselves as comic superheroes.

At the same time, however, they also welcome high-ranking emissaries from all over the world at their breakfast table, covered in coffee stains and bread crumbs. They stage their everyday life as a subversive rebellion, broadcast live on social media. So it is fitting that along with chanting "Mito, mito!" (myth, myth) at his inauguration, the crowds also called out "WhatsApp!" and "Facebook!"

To understand Bolsonaro, one must understand that relies on the internet because he has neither huge support from organized civil society nor from traditional media, political scientist Ricardo Ismael told DW. "Winning a presidential election in Brazil with so little money was a phenomenal achievement. Just like the voluntary support he came to know on social media. That was extraordinary."

Now Bolsonaro is setting to work on the screenplay of his presidency. "The script of this telenovela comes from him; it’s unusual, often a little skewed. Like eating Brazilian sweetbread. But the people like it, because it's original," explains Ismael.

Bolsonaro's relationship with wife Michelle is particularly well received. "She's not an intellectual, but many women identify with her. And she's not infuriating the feminists either," says Ismael.

Ismael also points out that Bolsonaro does not pander to traditional media outlets, notably the Brazilian media market giant Globo. But not only does he not pander — in his first week in office he also retweeted one of Donald Trump's controversial tweets attacking the media.

"It's not a Globo telenovela. It's a Bolsonaro telenovela," says expert Ismael. Unlike any other president before him, Bolsonaro's direct channel to his base means that the president sets a narrative that the influential Globo and other outlets have little choice but to cover.