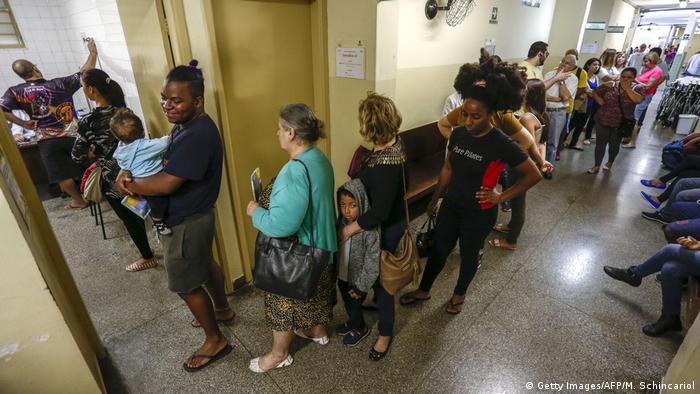 Last Thursday, Brazilian presidential candidate Jair Bolsonaro was severely injured in an assassination attempt. He was swiftly transferred to Juiz de Fora's Santa Casa hospital, where he underwent immediate life-saving surgery. For this, the surgeon will receive the equivalent of 76 euros from Brazil's public health care system Sistema Unico de Saude (SUS). The hospital will get around 230 euros.

The SUS grantes free universal health care for all Brazilians — an essential service in a country where poverty is rife and few can afford private health insurance. SUS is funded by the state, both at federal and local levels. "The idea that the entire population benefits from the SUS is great," says radiologist Flavia Engel Aduan, adding that only Canada has a comparable health care system. But, in fact, the SUS is massively under-funded in many Brazilian states and municipalities due to their chronic budget deficits.

Every Wednesday, Engel Aduan conducts biopsies at the Hospital do Cancer 3, one of four Instituto Nacional do Cancer (INCA) specialist hospitals in central Rio de Janeiro. The Morro dos Macacos favela covers the hillside behind it, and on rainy days, untreated sewage flows down from the shanty town to the entrance of H3. Which, in stark contrast to such conspicuous poverty, is one's of Brazil's most well-equipped SUS clinics — thanks to vast investments made by the country's health ministry.

Katia Aparecida is relieved because today her mother will finally get a breast biopsy to check for cancer. "We can't afford to lose anymore time," Aparecida says, explaining that the family clinic in her district of Santa Cruz on the outskirts of Rio de Janeiro wasn't working properly.

She says her father, who suffers from prostate cancer, has been waiting for a year to see a urologist. She has already paid more than 500 euros for treatments in private clinics. But now that both her parents suffer from cancer, she can no longer afford the treatments as she can't go to work to earn money.

The public health care system consists of three tiers: Family clinics and health centers ensure Brazilians have access to basic health care in their respective neighborhoods, so-called "second-assistance" hospitals treat common illnesses and can carry out minor operations, while specialist clinics like the INCA offer treatment in more serious cases. "That's how the SUS works in theory," says Engel Aduan. "In reality, it doesn't work like that."

The basic SUS tier of family clinics and health centers often lack dressings, bandages, drugs and doctors, as local councils often simply do not have enough the money to properly fund them. Many people therefore go to the second-assistance hospitals, who in turn are overwhelmed with patients who should be treated elsewhere. "That puts tremendous strain on the SUS's second tier, and then on the third one as well," explains Engel Aduan.

Because the basic SUS tier does not provide adequate health care, many patients end up having to travel hundreds of kilometers. Specialist clinics in Teresina, for example, tend to patients from all across northeastern Brazil, while clinics in the city of Goiania treat patients from all over central Brazil. This increased demand forces the national state to funnel even more money to the cities, while family clinics and health centers in small towns continue to suffer from chronic under-funding.

Cuban doctors to the rescue

In 2013, the "Mais Medicos" program was launched to fix the health care system and get doctors to move to under-served regions of Brazil. Due to a lack of Brazilian doctors willing to relocate, however, thousands of Cuban doctors were hired instead. "It's not just that Brazilian doctors don't want to move there — the problem is also that these clinics lack drugs, equipment and so much else."

The practice of sending patients to clinics that have the capacity to treat them at that given moment creates many additional problems. "It sounds like a nice idea, but unfortunately that's not how it works," says Engel Aduan. A surgeon will not necessarily want to rely on x-ray images made by another radiologist he or she does not know in some other hospital. "Now think what that means when millions of patients go to different SUS institutions," she stresses, adding that SUS hospitals have stopped sharing information among each other, which has led to chaos.

Engel Aduan has now opened her own clinic in Rio's south zone. But she still conducts biopsies for INCA because she feels compelled to support Brazil's ailing public health care system. "All citizens are entitled to healthcare, and the government must ensure everyone is taken care of," she asserts. "I think this is a great idea, and I would really appreciate seeing the SUS's basic-tier properly service Brazilians everywhere across the country."

Incidentally, hours after receiving life-saving surgery at an SUS hospital, Brazilian presidential candidate Jair Bolsonaro was transferred to one of Sao Paulo's most expensive private clinics.

The knife attack on populist presidential candidate Jair Messias Bolsonaro continues to inflame an already tense political climate. The victim himself could now benefit most from the incident. (07.09.2018)

As Germany's elderly population continues to grow, its under-staffed old age care system is struggling to keep up. Chancellor Angela Merkel recently made good on a campaign pledge and visited a nursing home in Paderborn. (16.07.2018)