Brazilians flooded the German Embassy's Facebook to dispute that Nazis were right wing. The controversy showcased the sharp polarization that has consumed the country ahead of the upcoming presidential election. 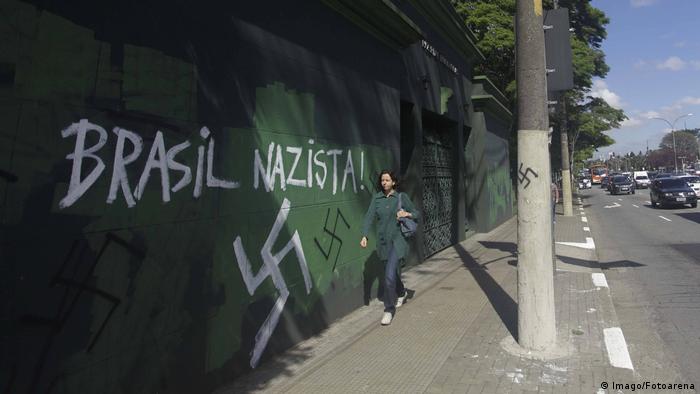 A video posted on Facebook by the German Embassy in Brasilia explaining the culture of remembrance over the Holocaust in Germany was met with unexpected hostility from many Brazilians. Some insisted that Adolf Hitler espoused a left-wing ideology, others sought to deny the Holocaust.

The video said that Germans "don't hide from their past," adding that "from a young age they're taught to confront the horrors of the Holocaust." The post garnered some 776,000 views on the embassy's Facebook page, not to mention a number of contentious comments.

Many Brazilians were enraged by the assertion that the Nazi party was a right-wing movement, pointing to its official name, the National Socialist German Workers' Party, as evidence that it was leftist instead.

Other commenters questioned the validity of the Holocaust, where approximately 6 million Jews lost their lives. Brazilian Holocaust deniers took to the post to label the event a "holofraud," which prompted the German embassy to respond.

"The Holocaust is a historical fact, with proof and testimony that can be found in many parts of Europe," the embassy wrote in response to one post.

The 'socialism' in Nazi

Political Scientist Kai Michael Kenkel, who teaches at the Catholic University in Rio de Janerio, told DW that the practice of classifying the Nazi's "National Socialism" as a leftist movement had become more and more common in recent years within Brazil's right wing movement.

Their notion is that "National Socialism" was a leftist movement because it includes the word "socialism." Kenkel said this connection between Nazis and socialism is akin to saying that the East German Democratic Republic and the People's Democratic Republic of Korea were indeed democracies.

Another argument plays on the statist economic policies of the Nazi regime, but this was also a practice of standard right-wing regimes, such as Spain under Franco and Brazil's own military dictatorship from 1964 to 1985.

With the episode, the German embassy got caught in the climate of high polarization that has enveloped the South American nation, with presidential elections looming large. The vote has been marred by voter disillusionment, concerns about fake news, extreme political rhetoric and even an assassination attempt against right-wing candidate Jair Bolsonaro.

Critics have labeled Bolsonaro a Nazi for his far-right nationalist tendencies, and many of the outraged commenters on the German embassy's post were supporters of the former military man.

His rival Fernando Haddad is the successor of jailed leftist former president Luiz Inacio 'Lula' da Silva and Dilma Rousseff, who's also under investigation. Lula and Bolsonaro are either loved or despised.  This year's election cycle has been among the most divisive in the three decades of Brazilian democracy.

The dramatic stabbing of firebrand right-wing politician Jair Bolsonaro was caught on video and shared on social media. The politician survived, but was seriously injured and underwent surgery. (06.09.2018)