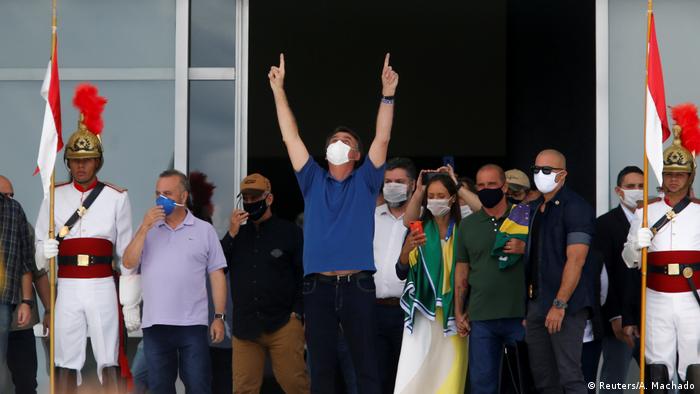 Brazil's President Jair Bolsonaro flouted social distancing guidelines on Sunday, as his country faces one of the world's worst coronavirus outbreaks, with the death toll rising sharply over the weekend.

Wearing a mask, Bolsonaro posed for pictures with supporters and did a series of push-ups with paratroopers — some of whom stretched out their right arms and swore allegiance to the president and his family.

"This is a pure manifestation of democracy. I'm really honored by this," he said of the crowd of supporters who defied stay-at-home orders to take part in the rally.

Bolsonaro has repeatedly downplayed the severity of the virus and pushed to reopen businesses.

This weekend, Brazil's number of confirmed cases surpassed Spain and Italy — making the country the world's fourth-largest outbreak. With Brazil testing far less than other countries, experts warn that the actual number of cases is likely much higher than the official tally of over 241,000 infections tallied up through the weekend.

Manaus, the hardest-hit Brazilian city, has had to resort to mass graves to accomodate the dramatic rise in burials. 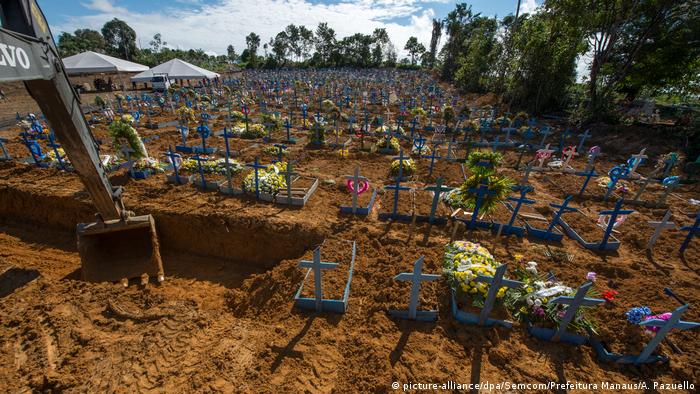 Manaus, in the nothwest Amazonas state, is burying the dead in mass graves

Experts have warned that due to undertesting, the actual figures could be as much as 15 times higher, cautioning that the worst could be yet to come. News agency AFP reported that almost half of all infection cases in Latin America and the Caribbean are in Brazil.

Despite the rising case numbers and fatalities, Brazilian President Jair Bolsonaro has repeatedly downplayed the seriousness of the outbreak, dismissing the virus as a "little flu."

He has also continued to attack lockdown measures implemented by some governors to contain the spread of the virus, and calling for businesses to reopen

"Unemployment, hunger and misery will be the future of those who support the tyranny of total isolation," the far-right president tweeted on Saturday.

His remarks came a day after Health Minister Nelson Teich resigned from his post after less than a month on the job.

Only the United States, Russia and the United Kingdom have logged more case than Brazil, but the South American country has carried out only a fraction of the tests than those three other countries.

Several German states have allowed restaurants to serve guests once more. As Germany officially tipped over into recession, officials said the country was preparing to relax quarantine rules. Follow DW for the latest. (15.05.2020)