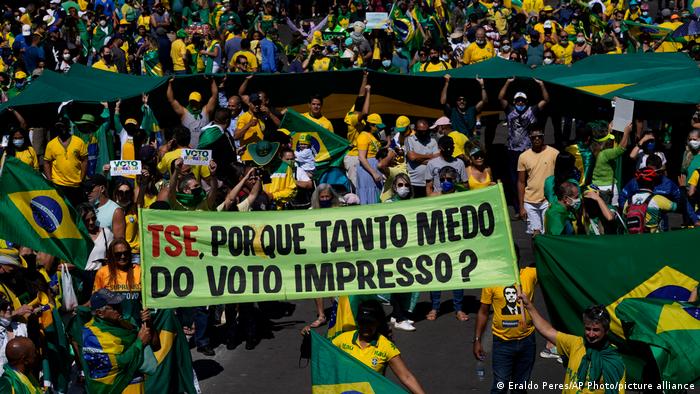 Bolsonaro supporters carry a banner reading: 'TSE, why so afraid of the printed vote?' — referencing the country's electoral tribunal

Thousands of Brazilians marched in cities over the weekend to show support for far-right President Jair Bolsonaro's call to introduce printed paper ballots for next year's presidential race.

Bolsonaro has repeatedly claimed that the electronic voting system of the country have allowed electoral fraud. Critics say the comments are a way to undermine trust in the vote next year.

Bolsonaro said that elections will not be held next year "if they are not clean and democratic" in a video shown to demonstrators across the country.

In Rio, some 3,000 people marched on Copacabana beach, many without face masks.

Brazil is reeling  from one of the world's deadliest outbreaks of the coronavirus. Some 20,000 people tested positive on August 1.

In the video message, Bolsonaro called people who think electronic vote was safe and subject to audit "liars."

He added that he would do "whatever necessary" to ensure there are paper printouts of votes cast in 2022 elections.

People also took to the streets in capital Brasilia and Sao Paulo, the country's most populous city.

In a separate message to people in Sao Paulo, Bolsonaro also said that "the will of the people must prevail."

What does Bolsonaro want?

Bolsonaro claims that the electronic system of voting, introduced in 1996, has allowed for fraud. He has not provided any evidence to back his claims.

Critics say his claims are one way of sowing doubts in the electoral system since his popularity is at a record low and he faces the prospect of losing next year.

Bolsonaro has repeatedly asserted that "printable and auditable" paper ballots are the only way to make sure that elections are conducted fairly next year.

In a Facebook Live event last week, the president spoke for more than two hours, claiming there was fraud in the last two presidential elections.

The 66-year-old is under fire for his poor handling of the coronavirus situation that has killed more than half a million Brazilians.

What are supporters saying?

One protester told news agency AFP she wanted votes that "can be recounted publicly for there to be more transparency, because there have been suspicions of fraud."

Another told the news agency that "voting strictly electronically is theft" and that voting with "printed receipts is not complicated, people will adapt." 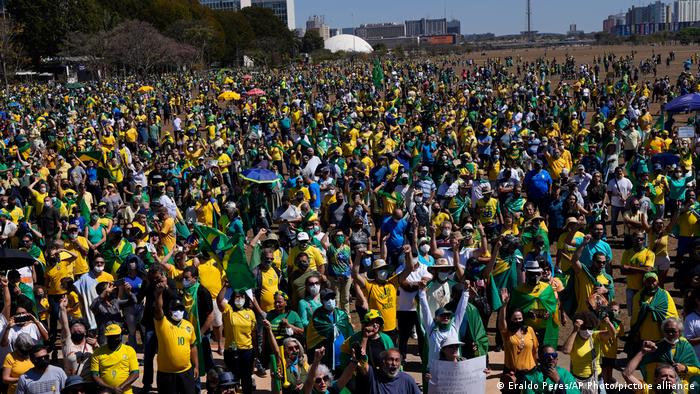 Do others accept the claims?

Brazil's top electoral court and members of Supreme Court said there has not been any fraud in voting system. They said it was efficient and votes could be audited.

Bolsonaro has called the court's president an "imbecile" for suggesting that introducing paper ballots could give way to manipulation.

A congressional committee will vote this week on a bill proposing paper ballots. It is expected to face defeat.

According to a poll conducted by Datafolha, 51% of people disapproved of Bolsonaro's policies as of early July.

It was the worst result since he took charge as head of the state in 2019.

As COVID-19 rages, the Brazilian president is increasingly isolated. Parts of the military and business leaders have distanced themselves. There is even speculation he could be impeached.

In pictures: COVID has Brazil in a stranglehold

Photographer Jonathan Alpeyrie has traveled to crisis and conflict-riddled regions around the world. His latest assignment took him to Brazil, a country which has been ravaged by the coronavirus pandemic.