As COVID-19 rages, the Brazilian president is increasingly isolated. Parts of the military and business leaders have distanced themselves. There is even speculation he could be impeached. Every day, at 3 a.m. (01:00 UTC) in the morning, the German-Brazilian artist Rafael Pütter dresses up as death and runs from the Brazilian Embassy to the Brandenburg Gate. There, he announces the daily COVID-19 death toll in Brazil.

On Wednesday, another record was broken when 3,869 people died. "I don't want more people to die," he told DW. "If a dangerous mutation spreads in Brazil, it will be dangerous for the whole world." 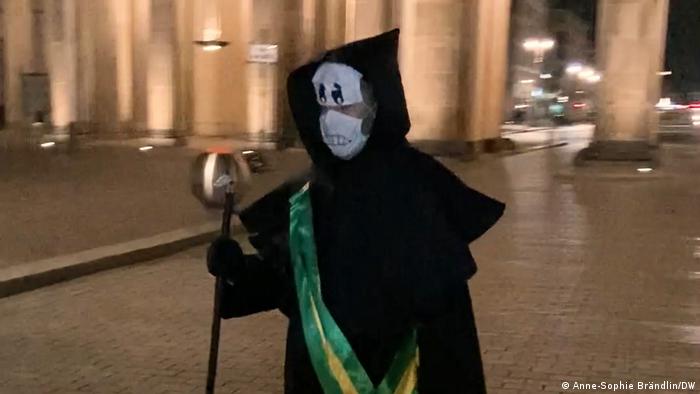 Each night, he explained, he plays the role of an "official of the Brazilian government who is causing the death of its population."

"I accuse Bolsonaro of health-policy terrorism!"

Is impeachment on the cards?

Brazil's far-right president has come under fire both at home and abroad for his failed handling of the coronavirus pandemic. At the start, he described the virus as "minor flu" and refused to wear a mask for a long time.

The situation in the biggest country in South America is now dramatic and has escalated in the past few days.

On Tuesday, the commanders of the Brazilian air force, navy and army all resigned at the same time, a first in the country's history. This came shortly after the president had reshuffled his Cabinet and got rid of his defense minister, Fernando Azevedo, his foreign minister, Ernesto Araujo, and his health minister, Eduardo Pazuello. 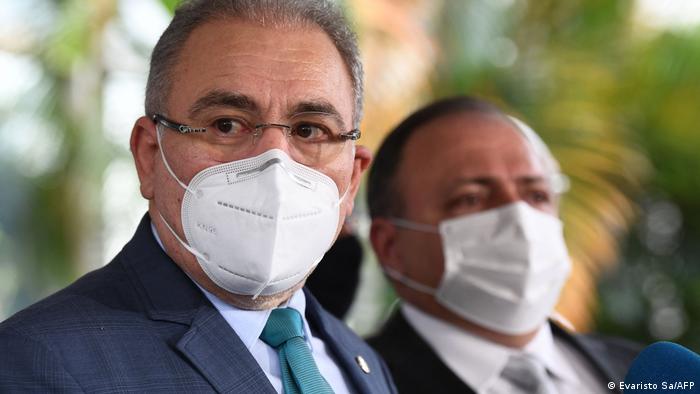 There is increasing speculation regarding the president. Arthur Lira, the speaker of Brazil's lower house and, until now, an ally of the president, recently raised the possibility of impeachment.

"Congress' political remedies are well known, all of them are bitter. Some are fatal," he said to fellow lawmakers. "They are often used when a spiral of wrong decisions can no longer be brought under control."

There have been a series of motions to impeach the president and Lira, who decides whether to put them to the house for approval, has already rejected five.

However, there are dozens more to examine. Political expert Valeriano Costa from the University of Campinas believes there are good grounds for impeachment, considering the rising death toll from COVID-19, but he says that there is a great deal of anxiety with regard to the consequences.

"It's never been as likely as now," he told DW. "But lawmakers are afraid of the reactions of the president's supporters, of uprisings and attacks by militias or the military police."

"It's a terrible situation, which is getting worse. And nobody has the courage to do anything."

However, the president's approval ratings have decreased continuously since the beginning of the year. According to findings by the polling outfit Datafolha in mid-March, over half of the Brazilian population (54%) was dissatisfied with his handling of the pandemic. In January, it was 48%.

Business leaders are distancing themselves from the president too. In an open letter to the government, over 200 executives, including former heads of the central bank, criticized the government's handling of the pandemic and advised a change of course.

Back in Berlin, Rafael Pütter is sick of all the negative news from Brazil. He plans to stop his nightly runs in two weeks' time. Instead, he will plant a sunflower seed for each COVID-19 death in his homeland.

"We need a sign of hope," he said. "We have to break out of this vicious circle. Aside from the grief, I want a new beginning."