Bosnian Serb arrested with copy of Dayton Peace Accord

The suspect reportedly tried to sell the document for $60,000, though it remains unclear how he obtained the treaty. The agreement ended the bloodiest war in Europe since World War II. 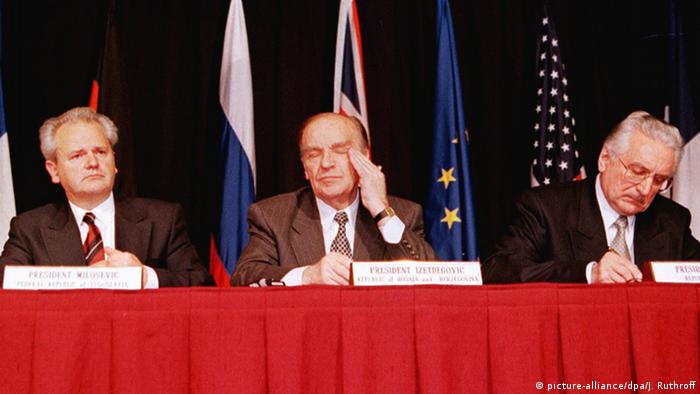 Police in Bosnia have arrested a man for trying to sell an original copy of the 1995 Bosnia peace deal known as the Dayton Agreement, officials announced Wednesday.

The document has been missing for 10 years.

The man has been identified as Zeljko Kuntos, a former driver for a former speaker in the Bosnian Serb parliament. He reportedly tried to sell the document for 100,000 Bosnian marks ($60,000 or €50,000).

The peace accord was brokered by the US and consummated by the warring factions - Serbia, Bosnia and Croatia - during a meeting at a US air base in Dayton, Ohio. Presidents Slobodan Milosevic, Alija Izetbegovic and Franjo Tudjman (pictured above) respectively, negotiated the accord under US auspices.

More than 100,000 people were killed during the nearly four-year-long war that tore apart the former Yugoslavia. The treaty, which was signed in December 1995, divided Bosnia into two autonomous zones, the Federation shared by the Muslim Bosniaks and the Bosnian Croats, and the Serb Republic.

"The person Z.K., who obtained during 2017 the original document written in English of the Dayton peace agreement, is suspected of offering it for sale in order to gain illegal benefits," police said in a statement. They gave no further details.

In 2008 it was discovered that the original English version of the accord was missing.

There are conflicting reports about when Kuntos, 48, was arrested. By one account he detained last Thursday in Pale, the Bosnian Serb wartime stronghold near Sarajevo, but another report said he was arrested on Tuesday.

Zeljko Komsic, a former high-ranking Bosnian Croat official, told Radio Sarajevo the seized document could also be a forgery, or even the lost Serbian copy.

He insisted that the Bosnian original was safe in the country's national archives and added that there were other copies, as the Bosnian Serb and Bosnian Croat sides also received copies.

"It is possible that more copies will emerge," Komsic said.

It remains unclear how Kuntos obtained the copy he had.