Bosnia gets government after 14-month impasse

Parliament has approved Prime Minister Zoran Tegeltija's new Cabinet after lengthy political wrangling in the Balkan country. The EU welcomed the government's formation as a step towards European integration. 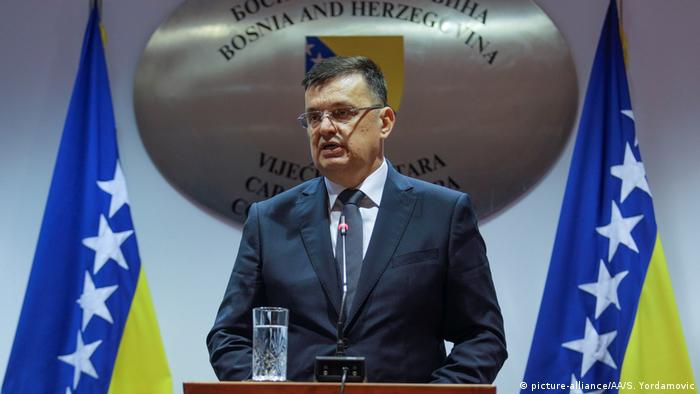 Bosnian lawmakers on Monday approved the formation of a new central government after 14 months of deadlock, raising hopes the country will tackle reforms needed to become a candidate for EU membership.

The European Union said the formation of a government "opens the way for renewed commitment of the political parties to allow for progress on the EU path of the country." Brussels currently considers the ethnically divided Balkan country a "potential candidate" to one day enter the 28-member bloc.

Disagreements among Bosnia's tripartite presidency of an Orthodox Serb, Catholic Croat and Muslim Bosniak over NATO integration had held up the formation of a government since elections in October 2018.

After a compromise between the ethnic groups was reached in November, parliament agreed upon Bosnian Serb economist Zoran Tegeltija as prime minister. The 58-year-old had previously served as finance minister in Bosnia's autonomous Serb Republic.

On Monday, lawmakers took the significant step of approving the prime minister's proposed Cabinet team with 29 votes in the 42-seat parliament.

Bosnia's political system was put in place following the 1990s Yugoslav wars to ensure each community has representation, but its complex power sharing arrangements and weak central government often leads to gridlock.

The country has been slow in making progress with the EU compared to other Balkan states as necessary reforms are often blocked due to political and communal disputes.

There has also been resistance from some EU member states, particularly France, on expanding the bloc into the Balkans.

Washington is bringing the Western Balkan states back to the negotiating table. The US initiative should galvanize the EU, which is currently busy with its own problems, says guest expert Christian Schwarz-Schilling. (10.09.2019)

The EU's fatal decision to block Albania and Macedonia's path to membership will destabilize the Western Balkans. The EU is lacking clarity when it comes to its interests, says guest expert Christian Schwarz-Schilling. (08.11.2019)

The capital of Bosnia-Herzegovina has held its first ever gay pride event amid heavy security. The event was dubbed "Ima Izac!," which roughly translates as "Coming out." (08.09.2019)

Several buses came to the squalid camp to move the hundreds of refugees following an international outcry. Bosnia along with Serbia has been experiencing an unexpected increase in migrant arrivals in recent months. (10.12.2019)

Lawmakers have voted to start work on pulling their autonomous Serb Republic out of Bosnia's armed forces, judiciary and tax system. The decision sparked warnings from the international community about a new conflict.