Borussia Dortmund back to basics in latest Bundesliga spectacle 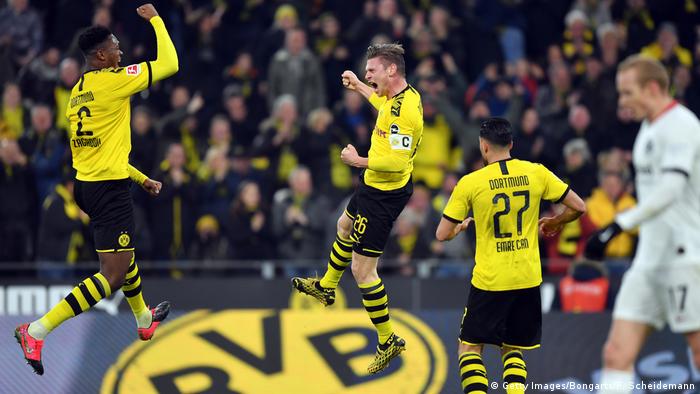 Some of the Borussia Dortmund ultras had been at the Westfalenstadion from ten o’clock on Friday morning.

They had spent all day distributing sheets of paper in different colors across the length and breadth of the sprawling South Stand, and measuring out various distances between blocks and entrances.

Taped to the concrete pillars beneath the stand were large posters with instructions, while ultras walked around handing out smaller versions, so that all 24,000 people on the towering terrace knew exactly what to do and when. When preparing a choreography of this size, every centimeter counts.

Phase one: a tribute to Dortmund, the city. "Big city, Dortmund: my dream!" read the banner at the bottom of the stand. Behind it, a gigantic hand-painted tapestry depicting famous sights on the city’s skyline was hoisted up from the roof, while a massive flag featuring the eagle on the municipal coat of arms was rolled out from the top of the stand. And in the background, sheets held aloft to show the red and white colors of the city.

Phase two: a tribute to Dortmund, the club. Right on cue, the red and white sheets were turned around to reveal the black and yellow colors of Borussia Dortmund, and the city eagle was replaced by the club crest.

The level of organization was seriously impressive. The same couldn't be said for their team's defending in recent weeks. On Friday night though, they finally got it right.

Lucien Favre replaced the unpredictable Manuel Akanji with experienced club legend Lukasz Piszczek as one of three central defenders in a back five. The move worked perfectly as Piszczek kept the dangerous Filip Kostic under wraps, while Dan-Axel Zagadou cut a classy, composed figure, sniffing out Frankfurt’s rare forays forward with ease.

"This was not just a clean sheet for the defense," said Mats Hummels afterwards. "But for the whole team." 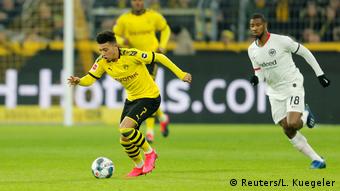 Jadon Sancho had another fantastic night for Borussia Dortmund

Further up the pitch, Emre Can could be seen co-ordinating Dortmund’s press in Frankfurt’s half, urging his new teammates to put defenders under pressure with unmistakeable arm gestures.

Dortmund defended as a collective, from front to back. It all resulted in Frankfurt leaving Dortmund without having registering a single shot on target. With French champions Paris Saint-Germain the visitors in the Champions League on Tuesday, the clean sheet will give Dortmund the biggest boost.

Four more goals won't have hurt either though. Fittingly, it was the 34-year-old Piszczek who fired in an 85 km/h rocket to give Dortmund a deserved halftime lead, the Yellow Wall chanting his name.

After the break, with their defensive duties done for once, Dortmund’s offensive power could be unleashed as Jadon Sancho, Erling Haaland and Raphaël Guerreiro all got on the score sheet in a furious second half.

"If we repeat this performance against PSG, we’ll have a great chance," said Hummels. "Especially with these fans behind us."

Those fans had shown pre-match the value of hard work, organization and teamwork in setting up a spectacle. Tonight, for once, Borussia Dortmund got that balance right on the pitch as well.