One small step for David and Guido, one giant leap for Bolivia. Their legal marriage represents a milestone for same-sex marriage in the conservative Catholic country. 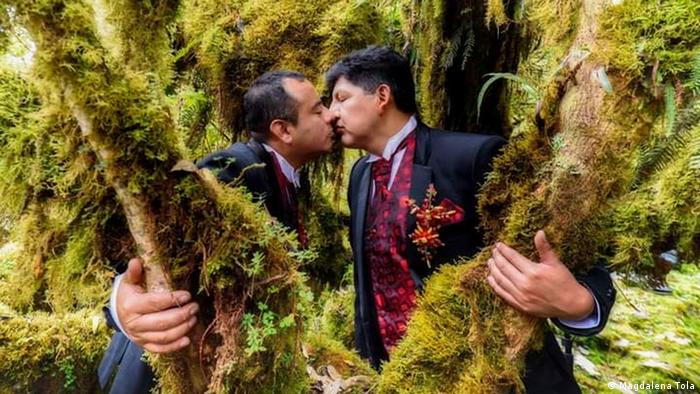 On Friday morning at 9 a.m., David Aruquipa and Guido Montano were back at the civil registry office in La Paz. But this time, unlike their many previous visits, the 48-year-old economist and the 46-year-old lawyer didn't leave empty-handed. On their way out the door, they carried in their hands a very important document: proof that their registered partnership had been legally recognized.

On Friday, Aruquipa and Montano become the first homosexual couple in Bolivia to earn the marriage equality they've been fighting for for years. Behind them, a grueling battle full of hostility, in a country in which the Catholic and Protestant churches still have a major influence. But their fight has also taken place alongside growing support for the LGBT+ community, especially in the capital, La Paz.

Bolivia catching up with rest of Latin America

"Of course, we're happy to be the first to pave the way. But at the same time that brings a lot of responsibility," said Aruquipa. With the couple inundated with interview requests, it's not easy to reach him these days. Perhaps the clearest expression of their relief is shown by the change to their Facebook status, which now reads: "casado," or married. 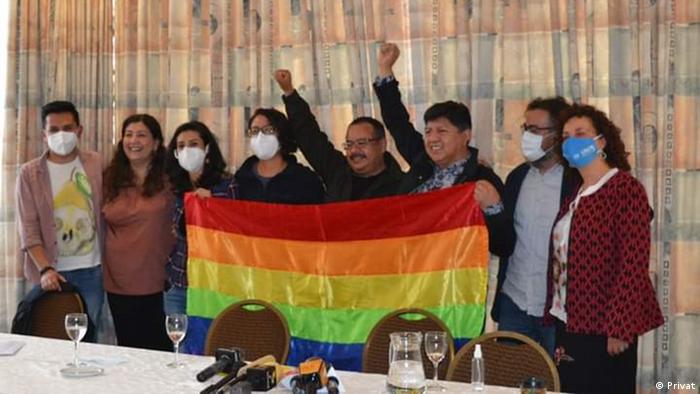 Aruquipa and Montano celebrated their legal marriage with friends, but will wait until 2021 for a big party

But the two men know all too well that the fight for marriage equality is just starting in Bolivia. "What we have accomplished is a first step toward a day when the entirety of Bolivia's diversity will be reflected," said Aruquipa — just as in other Latin American countries like Argentina, Brazil, Colombia, Ecuador, Uruguay and some parts of Mexico.

Aruquipa and Montano met at an educational institution in La Paz back in 2008, and have been a couple ever since. But what made them want to go to court and sue for the right to get married so many years later? Perhaps it was because Aruquipa once needed an emergency operation and Montano was not allowed to authorize it. They had to wait an entire day before a family member made it to the hospital to sign the relevant paperwork.

Or maybe it was because Montano had trouble flying to Mexico when authorities refused to accept his visa application, due to the couple's shared bank account. Or because the two are not allowed to share a family health care plan.

"Those are just a few of the stories," said Aruquipa. "But as a homosexual, especially as a gay couple, you are just used to facing daily discrimination and being bombarded with hateful messages on social media."

Resistance to their relationship is especially strident in far-right and evangelical Christian circles. Evangelical pastor Luis Aruquipa — no relation to David — has condemned the decision to allow them to marry. He argues that a couple must consist of a man and a woman. "The hostility would have been far worse if we weren't two adults with steady jobs and good incomes," said David Aruquipa.

In October 2018, the couple went to the civil registry office and applied for a civil partnership. Then the legal tug-of-war began — an emotional roller coaster. Initially, Bolivian authorities rejected the application, pointing to Article 63 of the Bolivian constitution: Marriage can only be between a heterosexual couple.

Aruquipa and Montano refused to accept the decision and took their case to Bolivia's Plurinational Constitutional Court. They argued that Bolivia's constitution violated international human rights standards, citing an Inter-American Court of Human Rights ruling that found that it was "the duty of states to recognize and protect the familial relationships of same-sex couples."

Even now, a day after the momentous event, the couple can hardly believe it. For years, authorities just brushed them aside, even made fun of them. "It was like a broken record: Article 63 … Article 63 …," recalls Aruquipa. "Administrators are supposed to find solutions to problems and help you make use of your rights as a citizen. But they just kept saying: 'That's the way it's written in the constitution. Period.'"

On Friday morning at nine it will be official. Other couples have vowed to follow their lead. "It was torturous but we always promised ourselves we wouldn't give up," said Aruquipa. When asked about the wedding reception, he says it can wait until sometime next year.

"It's not the right time to do it, with the coronavirus situation like it is," he said. "But we will definitely celebrate with a big party next year."

Traditional gender roles are no longer valid, but men are dealing with the new expectations of masculinity in different ways. From vulnerability to metrosexuality, gender is transforming.

Brazil: Trans candidates on the increase at local elections

Brazilians will be choosing new mayors and councilors on Sunday. Three times as many trans candidates are running as in 2016, and there are also more non-white candidates.