Bleaching and choking - it′s hard being a coral in Hawaii | Environment | All topics from climate change to conservation | DW | 21.12.2015

Warmer sea water is making coral reefs around the world bleach and die. In Hawaii, though, these amazing creatures face yet another threat: invasive algae, which grow out of control and take them over. 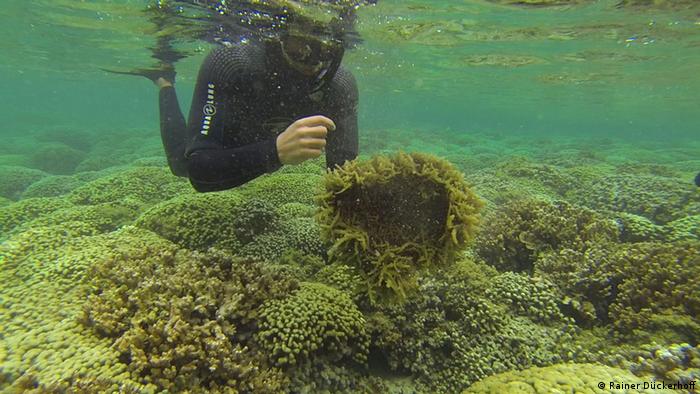 Invasive algae takes on the shape of the corals it smothers

Corals depend on sunlight for photosynthesis. When they get smothered with algae, they don't get any sunlight - and eventually die.

That is what is happening in Kane'ohe Bay, off the coast of Hawaii's main island Oahu. Two invasive algae species from Southeast Asia have spread to here.

The species were imported to Hawaii decades ago. People thought they might be a good resource for cosmetics and food additives. Scientists planted them into the bay, assuming that this wouldn't do any harm.

"But they were wrong, it is a big problem," says Hank Lynch, who works for The Nature Conservancy. "This stuff is absolutely taking over the ecosystem." The algae spreads, growing fast and smothering corals. Some coral reefs are already completely overgrown with algae.

With his boat, Lynch is on his way to one of the coral reefs in Kane'ohe Bay - because he and his team have found a way to help the corals. 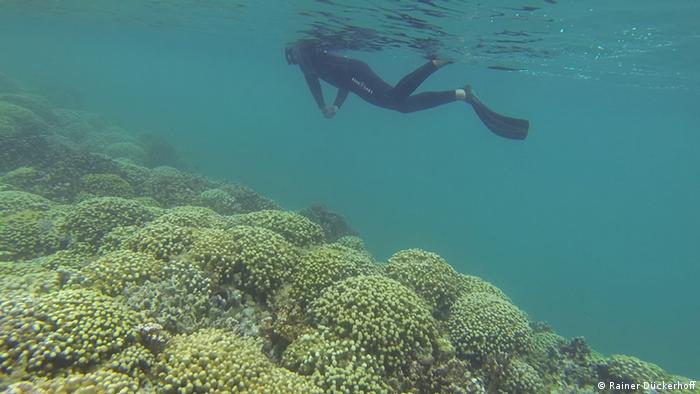 With the invasive algae removed, coral on Hawaii's reefs has a better chance

Invasive seaweed isn't the only unwanted species in Hawaii - many alien species threaten the vulnerable Hawaiian ecosystem, which developed far away from outside influences. This has made it all the more vulnerable to invaders.

New species arrive every day by plane or ship, says Josh Atwood, the invasive species coordinator for the Hawaii Department of Land and Natural Resources.

The agency staff inspects items that are coming in to Hawaii, Atwood says. "But there is just so much, that they can't see everything," he adds. Hawaii imports about 90 percent of its food, he points out. "We really rely on those ships coming in a fast and efficient way just to survive."

As long as Hawaii remains linked in with global trade, the US island state will continue to fight the invasive species problem, says Atwood. 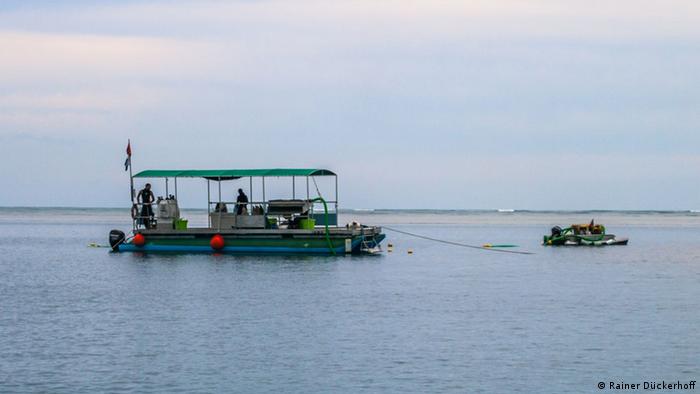 The "supersucker" consists of two boats

Lynch has arrived at his place of work for today: so-called reef 29. A flat raft, covered by a roof, floats in the water. It is attached to a second, smaller raft.

"This is our supersucker," Lynch announces proudly. "We custom-built this boat in 2012."

The small raft carries two gas-powered water pumps attached to a suction spout. Everything that the spout sucks up gets pumped into the big raft. The whole construction is a sort of vacuum cleaner, Hank admits, laughing.

Lynch's colleague Ryan Carr, who is already in his wetsuit, jumps from the big raft into the water and swims to the smaller boat. He starts the pumps and grabs the suction spout, pointing the intake hose toward all invasive algae he can see.

The algae, broken into pieces, ends up on a sieve on the big boat. Here, Lynch collects it and puts them into bags.

"When we are cleaning at full capacity on a reef that is very overgrown, we'll remove 40 or 50 of these bags, sometimes more," Lynch says. "I think our maximum load was 20,000 pounds of algae in a day." On average they remove about a thousand pounds an hour.

Lynch and Carr give the algae to local farmers, who use it as fertilizer. 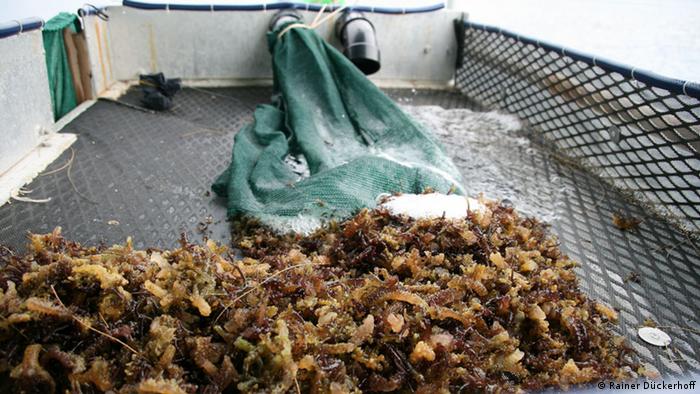 In one year, The Nature Conservancy can clean more than 20 acres of coral reef, they say. As soon as the corals are freed from the weed, they bounce back - if they haven't died yet.

But Lynch and Carr wouldn't get anywhere without the help of some small marine friends: sea urchins. These spiky native marine animals eat algae.

The State of Hawaii has raised 200,000 native sea urchins at a hatchery. Hank and his team release them on the reef so they can get to work.

"They prefer to eat this invasive algae," Lynch explains. "So it is a really good arrangement. Without the urchins we are just sort of mowing a lawn right here, we can knock it down but then it will grow back."

The sea urchins eat up all algae that the humans have missed - the remove the lawn, as it were. 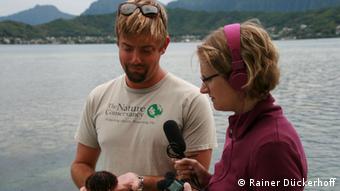 The future, though, looks grim for coral reefs around the world. Invasive algae are a minor problem compared to coral bleaching. Climate change warms up the oceans and makes seawater more acidic - two conditions that are hitting corals hard.

According to the United Nations Environment Program, one-fifth of the world's total reef area has already been lost. A further 15 percent is under imminent of being lost within the next decade.

Ruth Gates, a coral researcher at the University of Hawaii at Manoa, has observed many bleaching events in Kane'ohe Bay in the last years. She urges that it is time to act - worldwide.

"We have been monitoring how many corals have died for years and years and years. The question is, when do we convince ourselves, that yes: the reef is dying."

Experts say that even a 2-degree-Celsius increase in temperature could be too much warming for coral reefs. They are afraid coral reefs could disappear from the Earth within this century.

A new study paints a bleak picture of collapsing ocean ecosystems resulting from climate change and acidification. But we can ease some of the effects, say scientist. (14.10.2015)

Coral reefs are among the world's richest ecosystems - and they will disappear from the face of the Earth before this century is over if we don't make serious changes, ecologist Peter Sale told DW. (18.08.2015)