LG Energy and SK Innovations have reached a $1.8 billion (€1.5 billion) settlement over stolen corporate secrets. The deal is a boost for US car manufacturers. 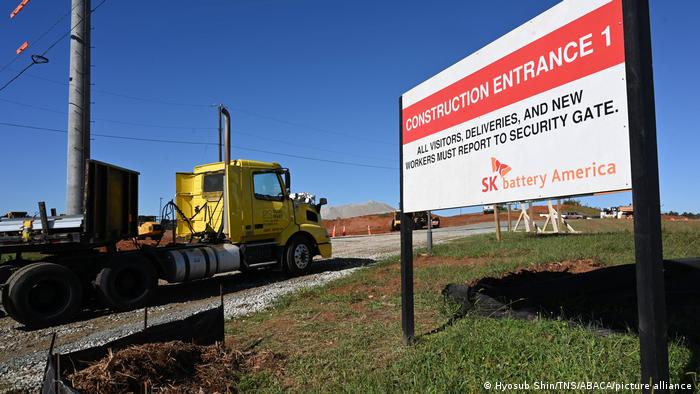 The $2.6 billion investment in a US factory in Georgia was under threat due to the dispute

The row between LG Energy Solutions and SK Innovation had jeopardized the fulfillment of contracts to carmaking giants such as Volkswagen and Ford. The deal between the two parties means that car manufacturers can now push ahead with making electric cars.

US President Joe Biden called the agreement a "win for American workers and the American auto industry."

The two companies pledged to work together to boost the supply of batteries for electric vehicles in the US, thus supporting the government's clean energy drive.

Why is the settlement important for the US?

The dispute goes back to 2019, when LG Energy took SKI to court in the US, accusing it of trying to steal employees and company secrets.

The US International Trade Commission ruled in February that SKI had stolen 22 trade secrets from LG Energy. The commission also prohibited imports of SK's lithium ion batteries for 10 years.

The ban would have hampered access to batteries for Ford and Volkswagen, both of which have pledged a rollout of additional electric vehicle models.

It would have also threatened the $2.6 billion (€2.18 billion) factory being built by SKI in Georgia.

Democratic Senator Jon Ossoff of Georgia welcomed the agreement on Sunday, saying it would save the plant and secure "thousands of jobs, billions in future investment, and that Georgia will be a leader in electric vehicle battery production for years to come."

What do we know about the deal between LG and SK?

The battery producers agreed on their settlement outside of court. SKI said it was prepared to pay $1.78 billion to LG Energy, as well as licensing fees.

Creating an electric car out of garbage

Creating an electric car out of garbage

As part of the agreement, all pending trade disputes were withdrawn from US courts and both sides said they would not assert new claims for 10 years.

"We have decided to settle and to compete in an amicable way, all for the future of the US and South Korean electric vehicle battery industries,'' the CEOs of the companies said in a joint statement.

Biden said the settlement was an important step for his $2.3 trillion infrastructure plan.

"We need a strong, diversified and resilient US-based electric vehicle battery supply chain, so we can supply the growing global demand for these vehicles and components — creating good-paying jobs here at home, and laying the groundwork for the jobs of tomorrow," he said.