Beyond the veil: Bold art by Persian-Arab women at the Marta Herford | Culture| Arts, music and lifestyle reporting from Germany | DW | 23.06.2017

Beyond the veil: Bold art by Persian-Arab women at the Marta Herford

Public debate about women in the Arabic and Persian region easily gets bogged down in prejudice: oppression, violence and backward ways of thinking are predominant perceptions of a region that has become the epitome of chaos, war and decay.

An exhibition at the Marta Herford gallery, located in northwestern Germany, tries to avoid these pitfalls by exposing the visitor to issues presented by female artists in countries as diverse as Iran, Libya, Jordan and Tunisia. Their art raises awareness about unseen and "in between" dimensions of Middle Eastern culture that can be found in desert landscapes or in Palestinian refugee camps. 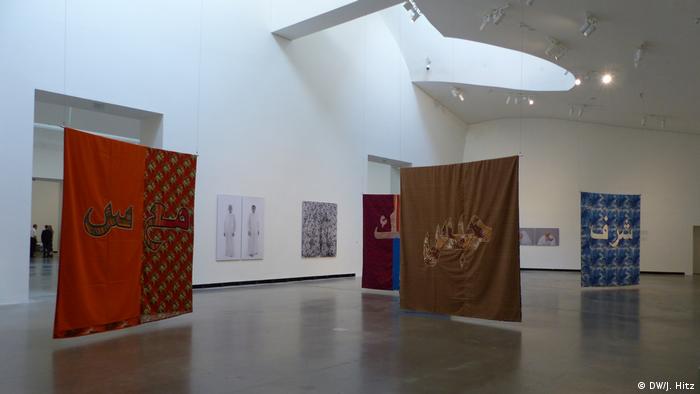 Large spaces for the women's artwork

The notion of "in-betweenness" is arguably most ingrained among stateless Palestinian people. A trained architect, Saba Innab has been participated in the reconstruction of the Palestinian refugee camp Nahr al-Bared in northern Lebanon since 2009.

The complexity of that project made her reformulate her initial question, "How can a camp be rebuilt?" into "How can one build without a land?"

Her series "Time Is Measured by Distance (III)" (2016) similarly illustrates this paradox: A stairway has become a dysfunctional and mutated body, the suspension that is created by the impossibility of movement stays unresolved.

Innab notes that after almost 70 years of diaspora, Palestinians have internalized the temporary and elusive. "I was interested in that aspect," Innab told DW.

Sama Alshaibi knows exactly what Saba Innab means. You have no place to return to, no place to go, said the Iraqi-Palestinian photographer who was a refugee for a large part of her life. "You are not welcome where you are, either." Sama Alshaibi lived illegally for years in the US before she was granted asylum.

To be a refugee or a displaced person - "that is an identity of its own," she said. Her photos have a subtle focus on war and exile - she does not want to shock viewers but show them a different narrative. For her "Sisala" project - videos and photos with her body as the connecting element - she traveled to faraway deserts in the Arab world and North Africa over a period of seven years. 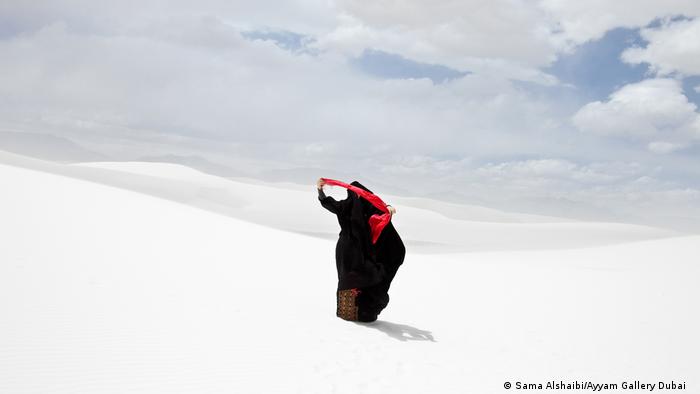 The refugee world Alshaibi portrays is that of the desert and climate change is clearly a key issue for the artist. She is worried about developments in the US since Donald Trump became president.

But she says it might also be good that the general focus is on the refugee crisis. As a young girl, she found it frustrating that there was so little interest in refugee issues. "That at least has changed, allowing us to enter into a completely different debate," she said.

The wars in the Mideast are only present in the background. "Many of the artworks are about violence, but in a very subtle, aesthetic way," curator Michael Kröger told DW.

Iranian-born Moreshshin Allahyari, for example, focuses on destruction by the "Islamic State" (IS) through 3D sculptures of artifacts the IS destroyed in 2015.  On the reprinting of the sculpture, digital information is added in the form of a memory card or flash drive containing Allahyari's research information, maps, pictures and videos of the months before the artifact in question was destroyed. 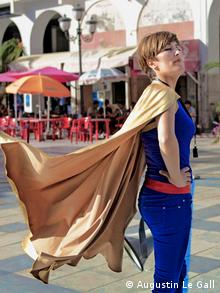 Moufida Fedhila stages humorous but provoking performances and interventions to point out the shortcomings in her native country, Tunisia. This is also where the so-called Arab Spring started. "For the first few months, it felt as if a door had opened to paradise, to total freedom, where anything was possible, artistically and in everyday life," she recalls of the revolutionary time.

Clad in a Superwoman cape, the artist urges the audience watching her "Super-Tunesienne" performance to participate in protests against the state. Disenchantment has meanwhile grown in Tunisia, and Moufida Fedhila's new works appear split in their assessment of her country. She ultimately seeks direct contact with people. "I believe in the transformative power of art," Moufida told DW.

From Jordan's Ala Younis to Amina Media from Algeria, the exhibition at the Marta Herford shows works by nine very different female artists. But why focus on art by women at all?

Initially, that was in fact a deterrent for the women. The curator remembers having to work hard to persuade them to participate.

"At first I was very skeptical - an exhibition that only shows women's work?" said Saba Innab, eyebrows raised. 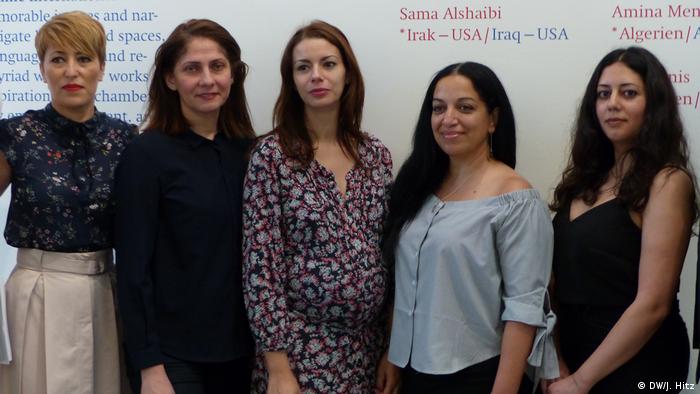 Initially reluctant, the artists are now pleased to be showing at the Marta Herford

Of course, she is fully committed to female empowerment, the artist added. But in this case, she wondered whether women were being objectified. "Are we simply exotic?" she asked.

The same was true for Moufida Fedhila and Sama Alshaibi. But Alshaibi was convinced when she saw the selection of participating artists. "I knew the very independent, smart and strong works of the other artists, so I thought this exhibition could convey to the audience how different, complex and non-clichéd art from women in this region can be."

The women - all from the United Arab Emirates - have been accused of bringing their servants to Europe without a work visa and then holding them in inhumane conditions. The case could have far-reaching consequences. (11.05.2017)

Beyond the veil: Bold art by Persian-Arab women