Between romance and Kalashnikovs - the women of 'Islamic State'

Marriage at age nine is permitted, working is not; make-up is evil. A new treatise by female "Islamic State" supporters sheds light on the role of women. Professor Susanne Schröter contributed the following article. 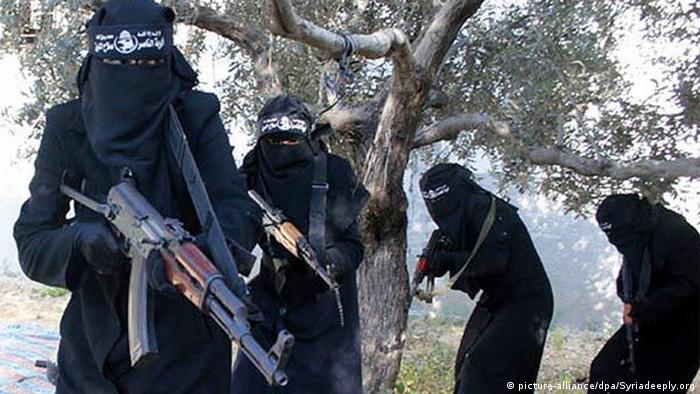 Around 10 percent of all foreigners who join the self-styled "Islamic State" are young women or girls. Around 60 female jihadis came from Germany alone. What fate awaits them?

Since mid-January, an Arabic document entitled "Women of Islamic State" has given us some clues. The authors are members of the Khansaa Brigade. This all-female patrol unit arrests women, for example, if their veils aren't positioned properly, or if the material of their long black robes appears to be too thin.

The gender ideology of the treatise is largely similar to other statements from the Salafist camp - booklets produced in Saudi Arabia and translated into German with the title "Women under the protection of Islam," for example. In 2010, they were banned in Germany because they propagate violence.

The key message of all these texts is the inequality of men and women, and the resulting regulations for state and society. "Women under the protection of Islam" reads as follows: "God in His wisdom gave women sensitive emotions, gentle feelings, the ability to be caring and loving. This enables women to do their natural duty of bearing children, breastfeed, and ensure the wellbeing of small children…" 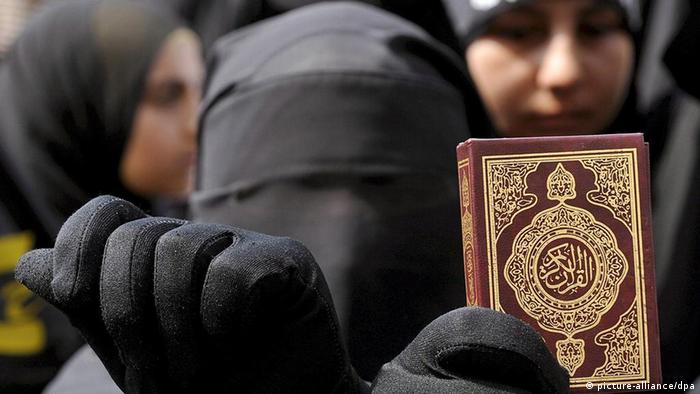 The manifesto for IS women is based on the Koran

According to the Salafist way of thinking, this wealth of emotion also prevents women from thinking clearly and being able to make sensible decisions. For this reason, God gave men dominance over women.

Both texts cite verse 4:34 of the Koran: "Men are in charge of women, because Allah hath made the one of them to excel the other." The Saudi text also cites the whole verse that continues: "As for those women from whom you fear rebellion, admonish them, banish them to beds apart, and scourge them."

It's noteworthy that the text written by the women fails to mention not only the legitimation of violence, but also the limitations imposed on women's rights in court, in inheritance law, or in respect to child custody or polygamy.

Both texts contain passages against "western" emancipation, which is said to demasculinize men and burden women with "male" tasks that they are unable to manage.

Working with men a capital crime

Given this kind of logic, it is not surprising that women are banned from the workplace. In fact, the authors say that women should only be permitted to work outside the home for a matter of hours as an exception, to teach or practice medicine. When they do, the laws of Sharia must be strictly observed.

Those who do not follow these laws could suffer a similar fate to that of the young dentist, Rou'aa Diab. She was accused of treating male patients, something that is a capital crime because of the rigid separation of the sexes under IS. Last August, Diab was arrested and executed. 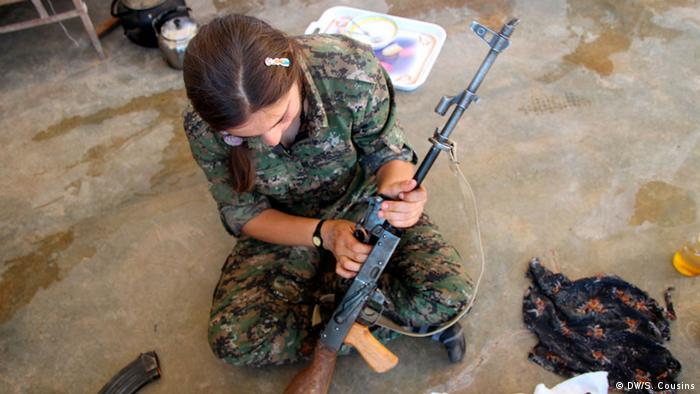 The opposite of IS women: A female Peshmerga cleaning her rifle

Hoping for love and romance

Many researchers believe it's the hope of finding love or romance that brings many young women to Syria. That's the promise conveyed by the many images of good-looking men bowing down before their completely veiled women.

One such image bears the text: "In the land of jihad, I found you, my dearest mujahideen." The images are accentuated by kitschy love stories. They suggest that the female jihadists in Syria find the husbands that Allah chose for them when he created the world.

Many female supporters of IS are more than "bedroom radicals," as some cynics call them. The long political and religious texts posted on the Internet by women are proof of this. Many such texts are the result of intensive research into Islamic sources. It's not surprising: many of the foreign women who join IS are highly educated. They also rival the men when it comes to their radicalism and brutality. They celebrate the execution of hostages, approve of crucifixion, and call for attacks on western countries. 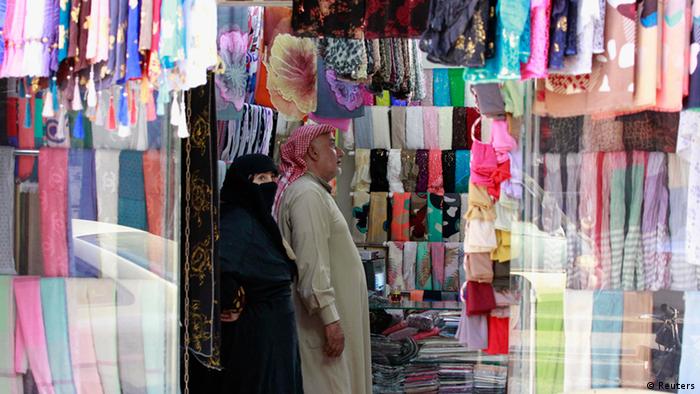 Shopping only with your husband - or with his permission

Cruelty as a way to paradise

A former British medical student who now goes by the name of Mujahidah Bint Usama went particularly far. She posted a photo of herself in a nurse's uniform holding up a severed head in her left hand. The women of IS may have partly been attracted by romantic ideas of finding a soul mate. But like the male jihadists, they also see themselves as part of a grand movement that will completely change the world.

What happens should disappointment set in, should the belief in the goals of IS dissipate, should these women tire of being relegated to housewives, should they no longer see their husbands as soul mates but as brutal militia members? We don't know.

Once in Syria, the women are subject to Islamic law. They lose their freedom to make decisions. Without the permission of a man and without a male relative's accompaniment, they are not allowed to leave the house or even make contact with their families via the Internet. When the apparent glamour of IS wears off, then the women of IS are nothing more than prisoners of a barbaric system.

Prof. Dr. Susanne Schröter is the head of the Frankfurt Research Center on Global Islam (FFGI), director of the Institute for Ethnology, principal investigator in the Cluster of Excellence "Formation of Normative Orders," director of the Cornelia Goethe Center for Women's and Gender Studies, and board member of the German Orient Institute.

Damascus does not need outside help in its fight against "Islamic State" jihadists, Foreign Minister Walid al-Moallem said Monday. He also criticized Jordan, which recently boosted its airstrikes within Syria. (09.02.2015)

Jordan's pilots have carried out 56 airstrikes on "Islamic State" militants in Syria. The country launched its latest air offensive after IS members released a video showing the brutal execution of a pilot. (08.02.2015)

How NATO weapons from Afghanistan are impacting Kashmir's militancy