Jordan's pilots have carried out 56 airstrikes on "Islamic State" militants in Syria. The country launched its latest air offensive after IS members released a video showing the brutal execution of a pilot. 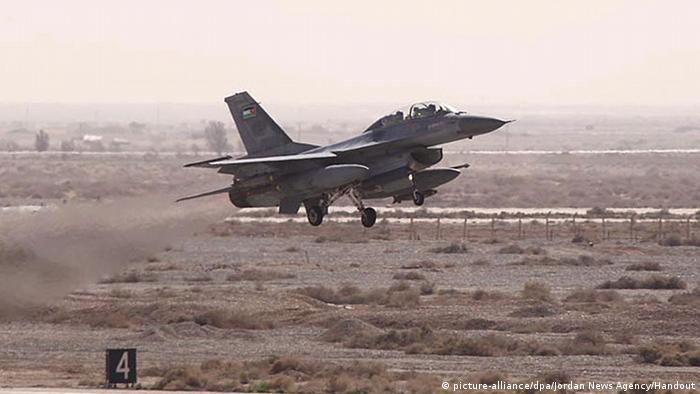 At least 56 raids were conducted on "Islamic State" (IS) militants as part of a three-day offensive conducted by Jordan, the country's air force chief said. The country had launched a series of intensified bombings in northeast Syria after IS extremists releases a video showing the brutal killing of a Jordanian captive.

The Jordanian air force would step up attacks in the coming days, al-Jabour said, adding that his country was aiming at crippling IS's revenues after the militants seized oil and gas facilities in Syria and Iraq to fund their campaign.

Campaign 'to wipe out' IS

Jordan's airstrikes are part of the US-led coalition's attempts to push back the Islamists after they took over large parts of northern Iraq and Syria, aiming to establish a caliphate based on orthodox Islamic law.

According to al-Jabour, coalition planes have flown about 946 sorties of the total 5,500 flights conducted by the US-led campaign to wipe out IS.

"We are determined to wipe them from the face of the earth," al-Jabour told reporters, adding that some 7,000 IS militants had been killed since the strikes began in September.

Jordan's King Abdullah has vowed to avenge the death of 28-year-old pilot Moaz al-Khatib, who was burned to death by IS militants earlier this week. Al-Khatib was caught in December after his fighter plane crashed into Syrian IS territory.

While public opinion has been supportive of al-Khatib's cause, many Jordanians fear being dragged into a conflict that could render their country vulnerable to terrorist attacks from hardliners within their kingdom.

The killing of Jordanian pilot Muath al-Kaseasbeh has shocked the world. But it's not enough to be disgusted. It's time to come up with a new strategy in the fight against Islamist terror, writes DW's Naser Schruf. (08.02.2015)

The United Arab Emirates has sent a squadron of F-16 fighters to Jordan to help against airstrikes on "Islamic State" militants. It had been unclear whether the UAE would be participating in attacks against the IS. (07.02.2015)