Best of the rest: the Bundesliga battle for Europe

With ten games remaining, the race for the Bundesliga's European places is hotting up. Well, it's at least lukewarm. DW profiles the contenders and predicts who will end up in the Champions League and Europa League. 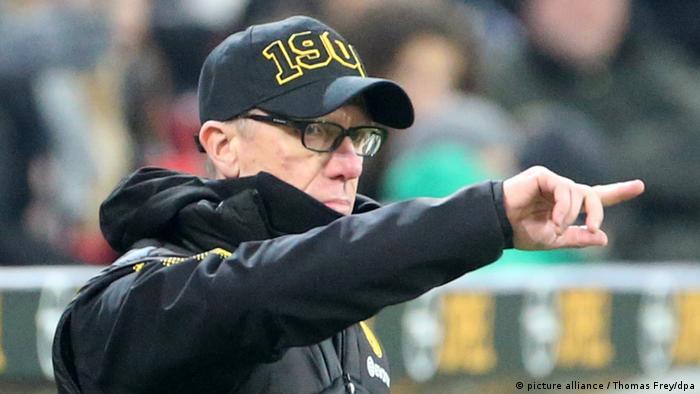 Between the start of the November and the end of January, no second-placed club managed to hold on to the position behind Bayern for more than one match-day. Borussia Dortmund have now achieved that feat three weeks in a row — but they've made hard work of it.

With 10 games to go, DW takes a look at the Bundesliga's European contenders to see who will end up 'best of the rest.'

Conscious of his team's susceptibility at the back, Peter Stöger has made a cautious start to his reign in Dortmund.

Often opting for two holding midfielders (out of Julian Weigl, Nuri Sahin and Gonzalo Castro), he waited until last week's game away at Borussia Mönchengladbach to start the exciting attacking trio of Marco Reus, Mario Götze and André Schürrle together behind Michy Batshuayi.

But for all Stöger's focusing on stabilizing Dortmund's defense, their opponents still create chances; Dortmund needed a string of Roman Bürki saves to hand on against Gladbach, while they conceded from a set piece against Ausgburg. And at the other end, the Reus-Götze-Schürrle triumvirate has only clicked twice, while Batshuayi has gone quiet.

The talent is there, but with league games against RB Leipzig and Eintracht Frankfurt coming up, the pressure is on Dortmund to perform. Otherwise, they risk being caught. 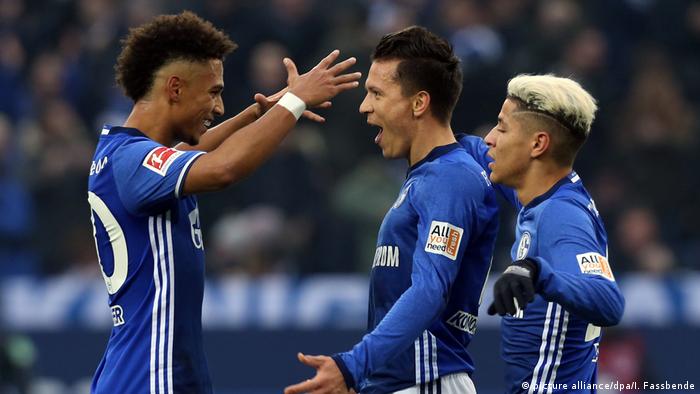 Tedesco's first season at Schalke has been successful on the pitch, even as stars threaten to flee the club

Tactically astute in his planning and articulate in his communication, 32-year-old Domenico Tedesco has made an impressive start to his job in Gelsenkirchen.

But the Royal Blues are overly reliant on striker Guido Burgstaller – the Austrian's eight goals complimented by five surprise headers from Naldo. And with Leon Goretzka set to leave in the summer, Schalke will need more than Franco Di Santo and Breel Embolo if they are to sustain an attacking threat capable of maintaining their top four status.

Nevertheless, Schalke can take a huge step towards achieving that in their five upcoming games against bottom-half opposition — a chance to increase the pressure on their direct rivals. 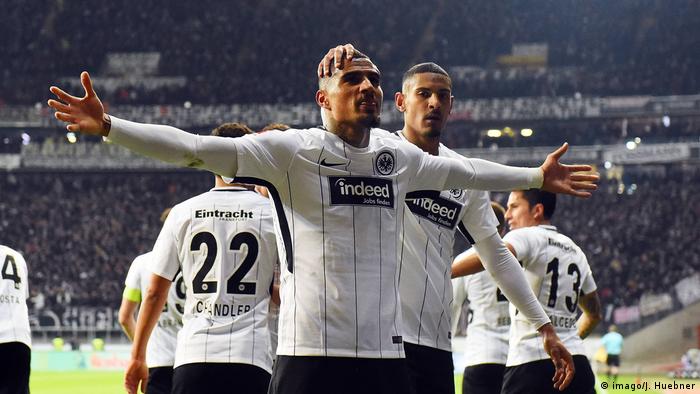 Can surprise package Frankfurt cling on among the big boys?

Eintracht Frankfurt have been one of the stories of the season. Having saved them from relegation less than two years ago, Niko Kovac initially focused on tightening up the Eagles' leaky defense, and also led them to last season's cup final.

In 2018, Frankfurt have started adding goals as well, thanks primarily to new arrival Sebastien Haller and the returning Ante Rebic. Winger Marius Wolf is a constant threat from the right hand side while Kevin-Prince Boateng has added some much needed experience.

Convincing wins over Wolfsburg (3-1), Gladbach (2-0), Cologne (4-2) and RB Leipzig (2-1) have demonstrated what Eintracht are capable of at their best — but frustrating defeats to Augsburg (0-3) and Stuttgart (0-1) show there's still work to be done.

March's trip to Dortmund will be a huge test for Frankfurt, for whom the Europa League would be a considerable achievement. 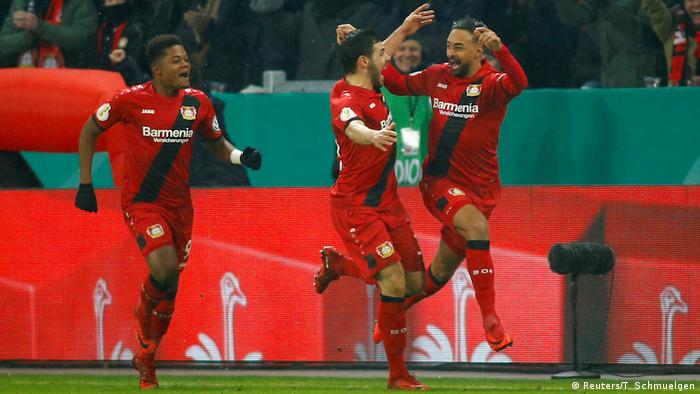 Leverkusen have no shortage of attacking talent in the squad

After a disappointing 2016-17 season, Leverkusen are determined to return to the Champions League where they feel they belong. But, perhaps unfairly, few believed new head coach Heiko Herrlich would be the man to do it.

After a shaky start, Herrlich has won the fans over with entertaining football and attacking flair, including statement wins away at Gladbach (5-1) and Hoffenheim (4-1).

It's no coincidence that Leverkusen's upturn has followed the return to form of Julian Brandt (four goals, four assists) and Kevin Volland (10 goals), while newcomers Lucas Alario (five goals) and Leon Bailey (nine goals, five assists) have also been key. The young Jamaican has been particularly impressive, combining dangerous dribbles and a lethal shot with a tireless worth ethic.

On paper at least, upcoming Rhineland derbies against Gladbach and Cologne should provide the Werkself with the ideal platform to launch their assault on the top four and reclaim their place in the Champions League. 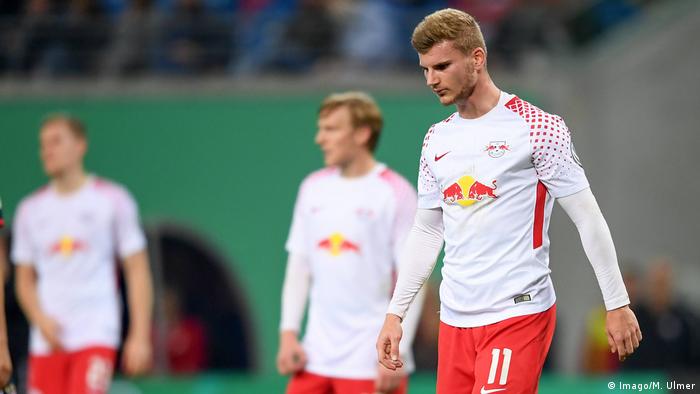 After a record-breaking debut season, RB Leipzig have suffered a serious bout of second-season syndrome this time around – but it's more than just a case of the Red Bull club's high-pressing game being found out.

On the personnel front, RB have suffered absences in key positions throughout the season. German international defender Marcel Halstenberg has been out with a broken hand since December and is set to miss the rest of the season — a huge loss as Ralph Hasenhüttl's team have conceded a disproportionate amount of goals from set pieces.

Mercurial playmaker Emil Forsberg also missed eight games through injury while, in the center, Naby Keita has failed to replicate his scintillating form of last season which convinced Jürgen Klopp to splash out 70 million euros for his services. The Guinean set to miss the rest of the season through injury too but the suspicion is that his head is already in Liverpool.

Questions also have to be asked about the team's attitude, having thrown away 1-0 leads three times already in 2018 to lose 2-1 against Freiburg, Frankfurt and Cologne. They were dumped out of the Champions League in the group stage and, with Borussia Dortmund and Bayern Munich set to visit the Red Bull Arena in March, an immediate return is far from certain. 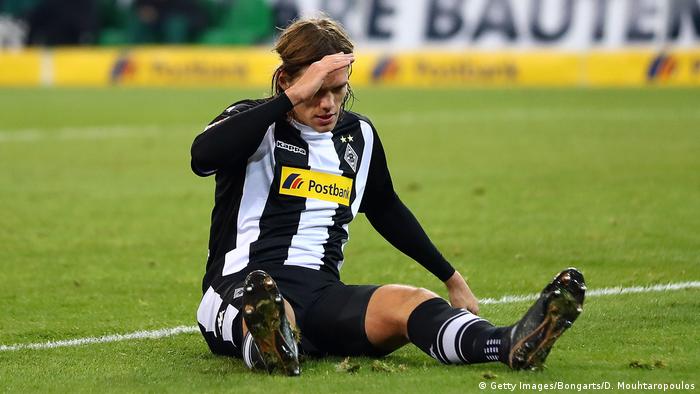 Gladbach are in the hunt, as usual, but are really struggling for goals

In the record books, one of Germany's most storied clubs. On paper, one of the Bundesliga's most exciting teams. But the reality is very different for Borussia Mönchengladbach at the moment.

Stranded in mid-table after starting 2018 with a run of five defeats in six, including four in a row without even scoring a goal, Saturday's 1-0 win over Hannover propelled the Foals back up to a rather flattering seventh.

With Matthias Ginter and Jannik Vestergaard at the back and Christoph Kramer and Denis Zakaria in midfield, Gladbach are solid enough in the center. But don't be deceived: despite boasting huge attacking talent in Thorgan Hazard, Lars Stindl and Raffael, they suffer hugely from the absence of an out-and-out striker — no team in the top half has scored fewer goals.

Discontent with coach Dieter Hecking is already spreading among fans who expect attacking football and European adventure - but with trips to Leverkusen, Munich and Schalke still to come, they may have to wait a bit longer.