Berlin′s Double-Deckers to Get Hydrogen Infusion | Germany | News and in-depth reporting from Berlin and beyond | DW | 24.07.2002

Berlin's Double-Deckers to Get Hydrogen Infusion

Germany's capital city is working with Volvo and a German fuel cell maker to replace its aging fleet of double-decker buses with new vehicles fueled by emission-free hydrogen. 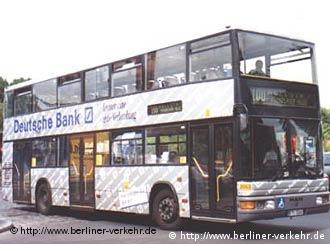 Berlin's double-decker buses are about to get a lot cleaner

The gentle diesel roar of Berlin's double-decker buses, affectionately called "Big Yellow," is a comforting noise to Berliners, a symbol of daily life. But they may soon be replaced by even gentler giants -- Kyoto Protocol-friendly, emissions-free fuel cell buses that are powered by hydrogen and oxygen.

In a report in Wednesday's "Berliner Zeitung" newspaper, Berlin's public transportation body, BVG, confirmed that construction plans have been completed for the buses, with the first model scheduled to hit the streets sometime next year for testing.

Burkhard Eberwein, BVG's bus technology manager, told the paper that two prototypes of the Volvo fuel cell bus would likely be put into service on the "100" and "200" lines, which pass by the city's most popular attractions – from Potsdamer Platz to the Reichstag and Brandenburg Gate – and are enormously popular with tourists.

The buses' fuel cell technology will make them quieter and more environmentally sound. Their only emission will be steam.

But the city says it has even more urgent criteria than the environment. "Oil supplies are limited, and we're thinking about how our buses will be powered in the future," Eberwein told the paper.

The buses will also help cut pollution by increasing the number of passengers they can carry. Currently, Berlin buses can only hold an average of 95 passengers, but the new buses will be able to pack in 120 to 130. In order to accommodate the load, the buses' size will be 1.8 meters (4.92 feet) longer than the current 13.5 meter-long (44.29 feet-long) double-deckers in the city's fleet.

The fuel cells are being built by Proton Motor, a Starnberg-based company that specializes in building fuel cells for use in public transportation. Similar hydrogen buses have been operating in the German cities Erlangen and Munich since 1996.

A previous effort in Berlin to introduce a fuel cell bus faltered due to problems with the Italian technology used in a prototype bus manufactured by transportation giant MAN. Eberwein told the paper the fuel cells were unable to provide energy at a steady rate. The test bus was supposed to be used in service between downtown Berlin and Tegel Airport starting in 2001, but has not yet been rolled out.

But BVG has great hopes for the Proton Motor and Volvo project. It's been years since the city placed orders for new double-decker buses, and the number plying the streets has sunk from 1,000 buses to 450 since 1992. If the prototype fuel cell double deckers are a success, "Big Yellow," could be around for generations to come.