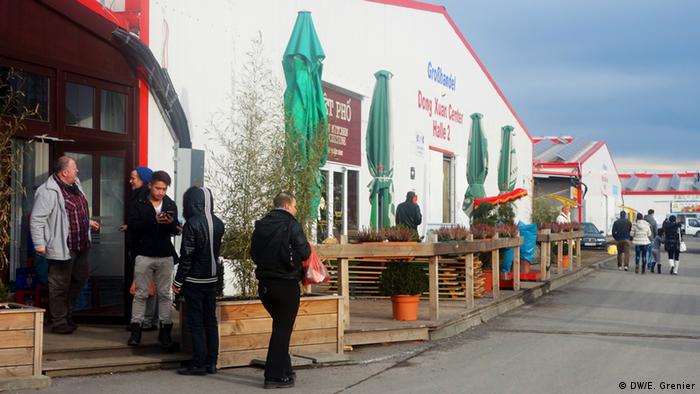 German authorities believe a large Asian food market on the outskirts of Berlin is a way station for a human trafficking network bringing hundreds of people, including minors, from Vietnam to Western Europe.

Investigators told the public broadcaster RBB24 that organized criminal networks use the Dong Xuan Center, a wholesale market where about 250 traders from across Asia do business, and other locations in Berlin to bring people into Germany via Russia, the Baltic states and Poland.

"We have evidence that these cases are in association with other cases nationwide, and that with the use of criminal trafficking methods underage people are brought illegally to Germany to work in nail studios," Michael Bender, spokesman for the German Customs Office, told RBB.

A Polish border officer told RBB24 that the price for being smuggled to Germany can run €10,000-€15,000 ($11,300-$17,000), costs that are either covered by families back home, or have to be worked off during the journey or on arrival. In some cases, the trafficking victims are forced to commit crimes to pay off their debts.

According to one senior investigator, quoted anonymously by the broadcaster, orphans and street children are sometimes picked up in Vietnam and brought to Germany after they had been "ordered" by criminals in Western Europe.

A trial is currently taking place in the Polish city of Poznan, where one victim testified that a trafficker had spoken to him in his village promising work in Europe, in exchange for which his grandmother had been forced to sign over her home. One of the defendants at the trial, a Pole, named the Dong Xuan Center as an important way station, RBB24 reported.

"We're talking here about trading human beings and modern slavery," Polish state prosecutor Michal Smetowski was quoted as saying. "There were children from very poor families there, including orphans."

Even if they are picked up, many of the children subsequently go missing. According to the Tagesspiegel newspaper, 472 Vietnamese minors have been reported missing in Berlin since 2012.

In 2018 federal police searched the Dong Xuan Center, often colloquially known as Little Hanoi, as part of a large-scale raid on human trafficking networks. Documents were seized showing that the traffickers were using fake marriages to bring Vietnamese people to Germany.

Hundreds of women who were being sold as brides have been rescued in one of the largest anti-trafficking operations to date in China. In some of the worst cases, women were kidnapped and taken across China's borders. (21.06.2019)

Pakistan has arrested a number of Chinese nationals for marrying Pakistani girls and then forcing them into prostitution in China. The scandal has shocked the Islamic country, S. Khan reports from Islamabad. (11.05.2019)

Four years ago, the bodies of 71 migrants were found inside an abandoned truck in Austria. The main suspects had already been sentenced, but now an appeals court in Hungary has delivered the final ruling on the case. (20.06.2019)

Poverty has run rampant in a Taliban-ruled Afghanistan. So much so that an ever-increasing number of Afghan parents are being forced into trafficking their own children.