Berliners campaign to limit billboard ads | Germany| News and in-depth reporting from Berlin and beyond | DW | 17.01.2018

A campaign has been launched in the German capital to reduce the number of billboards and free up public space. The group behind it, Berlin Werbefrei, says it would help bring back the city's unique character. 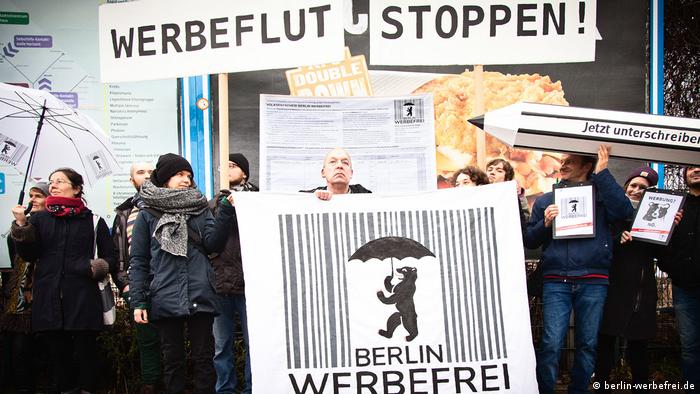 A group of Berliners have launched a campaign to limit the proliferation of billboard advertising in Berlin — and to ban it totally from kindergartens, schools and universities.

The campaign, named "Berlin Werbefrei" ("Ad-free Berlin"), aims to set up a city-wide referendum about an "anti-commercialization" law the group has drafted.

As explained on the campaign's website, some of the demands of the new law appear fairly radical: adverts for products and services would only be allowed at the "location of the service" itself — in other words, at the stores or restaurants.

All ads for events and non-profit enterprises, meanwhile, would still be allowed on the special pillars that already exist throughout the city, and all public transport stops. Moreover, all "degrading or discriminatory" ads would also be banned, a measure that is already being weighed up in certain districts. Schools and kindergartens would also be specially protected from commercial influence — especially in the form of classroom material sponsored by companies, which anti-lobbying campaigners say are often biased and serve commercial interests. 'Living in an infomercial'

Berlin Werbefrei spokesman Fadi El-Ghazi said walking around the city was like "living in an infomercial," and that, unlike a television, it can't be switched off. "Billboards take away our freedom to choose whether we want to see ads or not," El-Ghazi told DW. "I can turn the radio off, on the internet I can use an ad blocker, and I can turn over the page of a newspaper."

He also rejected the argument of critics, especially from the pro-business Free Democratic Party (FDP), that the law would return the city to its dull communist days. "A colorful city should also be a little commercially colorful," FDP economic policy spokesman Florian Swyter argued. "We had the opposite of that up until reunification in East Berlin."

"We don't think that the city will be become gray because of our ad law," countered El-Ghazi. "There will still be public ads — just not for products and services."

In any case, El-Ghazi argued, billboards advertising global corporations had helped make all modern cities look the same. "We have the same stores in every city now, and the same ads with the same content," he said. "That leads to a uniformity of the city. We see Berlin as colorful and diverse, and we like it that way. For us, a reduction in public advertising would mean an increase in the city's value as public property."

Berlin's center-left government, for its part, appeared at least partially open to the idea — having itself recently signed new contracts with advertisers. Petra Rohland, spokeswoman for Berlin's urban development department, said there was "some overlap" between the campaign's demands and the government's own policies. "For example, that there should be no advertising in schools," she told DW. "We've made new contracts that should reduce the amount of advertising — giant billboards will be reduced by 30 percent."

Nevertheless, the government says the city has a financial interest in advertising space. According to Rohland, public advertising will bring the city a revenue of €440 million ($540 million) over the next 10 to 15 years. "The city needs that income. That finances public toilets, for example, and the operation of public fountains," she said. "That is quite a lot of money, and a large part of it would disappear if this initiative were successful." 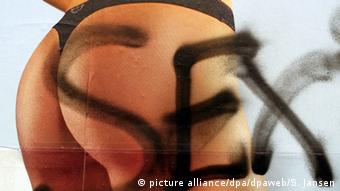 Some Berlin districts are already moving to ban sexist advertising

But this, El-Ghazi said, is no great loss. According to the campaign's estimates, their law would cost the city around €31 million a year, or 0.1 percent of the annual state budget, which next year is projected to be €28 billion. Given that the city is currently experiencing an explosion in tax revenue, thanks to its growing population, the campaign argues that the loss to the public purse will be increasingly negligible.

Other Berlin politicians have given the plan a mixed reception. The Green party, which is part of the three-way coalition government (also comprising the Social Democrats and the socialist Left party), is also sympathetic.

"The Berlin city image is currently too shaped by advertising. A debate about that is urgently required because public space belongs to everyone," Berlin Green party chairman Werner Graf said in a statement. "Berliners have a right to help decide how that public space looks."

But the FDP's Swyter was not a fan at all. "I don't see any need to ban commercial advertising," he told DW. "And I don't think this would make the city more beautiful. And on top of that I think it would be damaging, because of course it would affect economic activity."

In any case, there is still a long way to go to a referendum, let alone a new law. The campaign needs to collect 20,000 petition signatures over the next six months to force the state parliament to assess the plan and make its own suggestions.

If those suggestions do not satisfy the campaigners, they would have four months to collect 200,000 signatures. This would force the parliament to re-consider, and if it says no again, there would be a city-wide referendum — probably coinciding with the European Parliament election in May 2019.

But it might not come to that. "Maybe we can come to an agreement and meet in the middle, so that our interests coincide," said Rohland, speaking for the urban planning department.

Brutal heat and flooded streets have marked the summer of 2017 in Germany. What steps are German cities taking to brace for the increasing unpredictability of climate change? (05.08.2017)

German construction companies may no longer be building as many new buildings in the coming years - despite a deepening housing shortage. Experts say there needs to be a "culture change" in how we think about houses. (10.01.2018)

Berlin 24/7: How a night in a hotel can make you feel at home

How does it feel to spend a night in a hotel in your own city? DW's Gero Schliess takes a look at Berlin through the eyes of a tourist. (14.01.2018)