"Circle day" — that's how some Germans refer to February 5, 2018. It's the day when the Wall has been gone for as long as it stood. DW's Klaus Krämer shares his recollections of Germany's division and reunification.

It almost seems unfathomable that precisely 10,315 days have passed since the Berlin Wall came down. Just as many days as the Wall, constructed in 1961, once separated a city, a nation and somehow the entire world. In my mind, the duration of the Wall's existence seems to have been so much longer.

I must admit that when the Wall was built I was still so small that I probably slept through this major, and tragic, historical event. But one thing I still remember is the stern expression on my parents' faces whenever they talked about the fate of East German refugees desperately trying to cross the border, especially those who were killed.

Our home in the Rhineland in the western part of the former West Germany was very far away from the divided city of Berlin. Nonetheless, the brutal and ugly construction of concrete and barbed wire that destroyed the lives and hopes of so many people also touched us in the west.

Read more: Opinion: The Berlin Wall is gone — but is it really?

The Berlin Wall: A deadly divide

During my school years, the Wall seemed somewhat closer to me. When we went on a school trip to West Berlin, I was already familiar with the city's history. We visited the opera, various museums and Berlin's famous shopping mile, the Ku'damm; but nothing affected us like the Wall that mercilessly separated Germany.

The city of West Berlin seemed like an isolated island to us. The views from visitor platforms across the Wall at lots of wire and watchtowers, as well as the frightening gaze of border soldiers staring at us through field glasses, were deeply entrenched in our minds. It was a highly tense atmosphere that couldn't possibly get any worse — or so I thought back then. 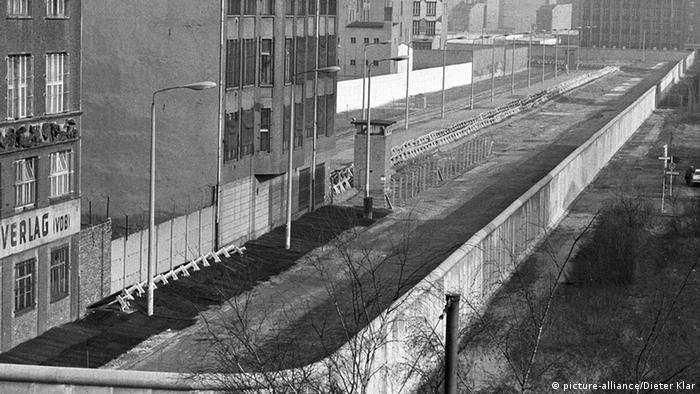 The border between West and East Berlin at Potsdamer Platz

Six years later I changed my mind. Now aged 21, I was sitting on a train from Cologne to Moscow where the Olympic Games were to take place. But to protest the Soviet invasion of Afghanistan, all Western countries apart from Britain decided to boycott the event. For us visitors, things didn't look too rosy.

To put it mildly, the boycott had a negative impact on the mood of East German border guards — although we wondered whether it was possible to further enrage these already grim looking guys. We had to endure harsh controls at various checkpoints. Coldly staring at us, the border guards commanded us in very sharp and threatening tones. We had to open our suitcases several times so they could examine every single item. Suspected of hiding something, we even had to peel bananas. As it was already dark when the train reached Berlin, the border was illuminated by blazing searchlights that would foil any attempt to flee. We felt particularly threatened at the sight of watchdogs on long leashes that barked aggressively at passing trains. I'll never forget the armed soldiers menacingly marching up and down the platform at Friedrichstrasse station, or lurking half-hidden in their surveillance cabins under the roof.

I wondered how all this must have felt like for normal citizens or, even worse, dissidents, who were forced to live in this surveillance state. It was an experience that shaped my views of the Wall, as well as the communist state entrenching itself behind it.

As the years passed, my interest in East-West relations and the separation of Germany never faded. The number of attempts to escape from the iron fence mounted. Although most attempts came to a fatal end, I celebrated any successes. But against all odds, the German Democratic Republic continued to exist and was apparently in good shape. 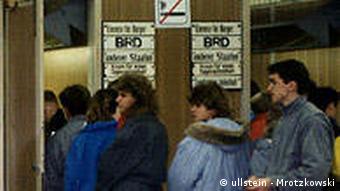 People queuing up at the socalled 'Tränenpalast,' the palace of tears, the border crossing at Friedrichstrasse

Only in late April 1989 did I visit Berlin once again. As an editor at a radio station, I had the opportunity to join other journalists on an information trip during which we talked to political representatives of the Berlin Senate about the current situation. We also enjoyed being shown around by an old city guide who took us to all kinds of historical sites including some to which tourists didn't normally have access.

I'll never forget the pale face of a young blonde border guard who controlled my passport at the border at Friedrichstrasse. I also remember the peculiar East Berlin stench caused by two-stroke engine exhaust fumes and coal heating, as well as the lethargic facial expression of the inhabitants. A final look at the Wall towards the end of our trip made me realize that it had been constructed with the intention of making it last for eternity. 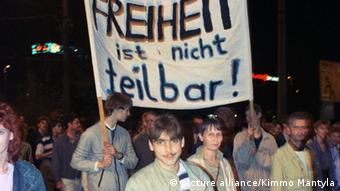 Overcome by candles and prayers

But events were fortunately to prove me wrong. At this point, the intended eternity was only to last for another six months. By then, this horrible construction called the Berlin Wall had faded into history — together with its guards. The breath of freedom and the wind of change had torn it down. This incredible historical event that almost nobody had thought possible filled me with joy.

What's most remarkable about the fall of the Berlin Wall and the ensuing reunification of Germany was the fact that it wasn't brought about by force but a peaceful revolution.

"We has calculated for everything," said Horst Sindermann, a representative of East Germany's communist SED party, "except burning candles and prayers. They disarmed us."

So it remains a miracle that this revolution took place without a single shot being fired.

Hopefully this fact won't be forgotten in the course of the next 10,315 days.