The Berlin Wall stood for 28 years, two months and 27 days. Now it has been gone for just as long, at least as concrete and barbed wire. In other forms, it still stands, writes Marcel Fürstenau. 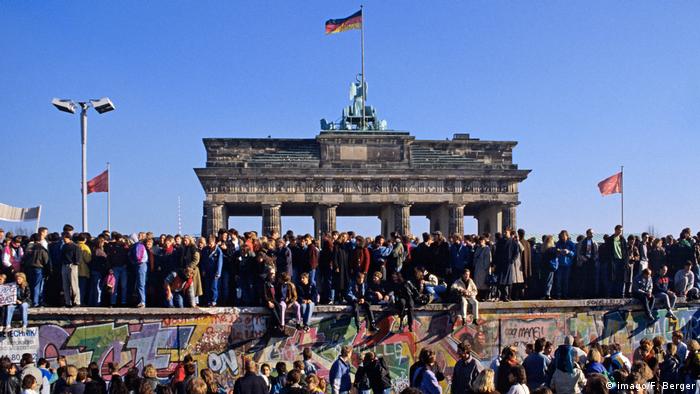 I grew up with it. It was just a few hundred meters (yards) from my playground: the Wall. As a teenager, having moved house with my family, I looked across it from the kitchen window into East Berlin. Although I was walled-in, I felt free. And it was not mere fantasy, because I could always go anywhere I wanted – even into the German Democratic Republic (GDR), commonly known as East Germany, where my compatriots lived, who could not come to us unless they were retired.

I was not yet born when the hideous, nearly 160-kilometer (99-mile) thing went up on August 13, 1961. I came into the world one year later. The Wall was older, but I outlived it. Now I have been around almost twice as long as the Anti-Fascist Protection Barrier, as the GDR rulers called their inhumane, deadly construction, which was finally toppled by brave people in the East after 28 years, two months and 27 days. On February 5, the Wall has been history for just as long.

The Wall is gone, with the exception of a few preserved parts that are necessary to serve as a small reminder of what consequences walls can have for people. These consequences can last a long time. The divisiveness of the past comes into the present when I speak with former East Germans about their lives in a reunified Germany. When they complain about lower pensions, for example, they are more or less right. That this inequity persists after 28 years without the Wall is shameful.

It does not surprise me at all that many East Germans feel as much like second-class citizens now as they did before. I never understood replacing most GDR elites with people from the West. It made sense for politically sensitive positions, but in business, academia, science and culture it went beyond the necessary for my taste. In 2018, Germans from the former East remain underrepresented in leadership positions across the board.

Merkel's rule is no comfort

Should I take comfort in the fact that my chancellor for the last 13 years, Angela Merkel, though born in Hamburg, was brought up in the GDR? That actually sounds more sarcastic than I intended.

On the contrary: I am fully convinced that our internal reunification would be much further along if we had more Merkels in high positions. This is why I found it very regrettable that Joachim Gauck did not stand for a second term as president in 2017.

My understanding for another aspect of politics has long since ended: the intentional marginalization of the Left party. The governing conservatives (CDU/CSU) continue to refuse to bring joint motions with the Left.

Recently, however, I was able to experience the appreciation for the Left even among Merkel's political allies at a reception for the 70th birthday of Gregor Gysi. Parliamentary President Wolfgang Schäuble (CDU) recognized the role this East Berliner born into a communist family played in helping bring Germany back together.

Although Gysi has often faced hostility because of alleged contacts in the GDR's notorious intelligence and secret police agency, the Stasi, Schäuble's show of appreciation for him was honest and came from the heart, breathing life into the "Christian" part of his party's name. I would like this more often and, most of all, in public!

It is clear to me: Those who still reject a political camp because of its historical roots lack democratic maturity. This is how psychological walls are cemented in a country where the concrete Wall fell 28 years, two months and 27 days ago. The point we have now reached, at which the length of time it existed is equal to the time it has not existed, is a new chance to tear down the last of the walls in the mind.

And it is young people who can show us the way: For them, east and west are largely just geographical points. Recently, my family celebrated its first inter-German wedding, as it once would have been called. Both were born shortly before the Wall fell – he in state of Baden-Württemberg in the west and she in Saxony in the east.

Today, they live in Leipzig, the city of heroes, where in 1989 citizens held the legendary Monday Demonstrations that were a significant part of East Germany's peaceful revolution.

Fortunately, stories like this are normal for the generation of my younger relatives, to which my own children also belong. Many older people could follow this example, even if it can be, in part, understandably difficult. For political leaders, I wish that the last of the Cold War warriors would finally recognize the signs of the times and live up to their responsibilities. And then, the last walls can really fall.

EU defense ambitions should not 'duplicate' NATO: Stoltenberg 1h ago

Opinion: No far-right publishers at the Frankfurt Book Fair, please! 7h ago