Germans remember the night when the Berlin Wall fell

Germany is marking 28 years since the night when the Berlin Wall fell and, looking for freedom, thousands headed west. The anniversary comes as Germany continues to confront the problems of reunification. 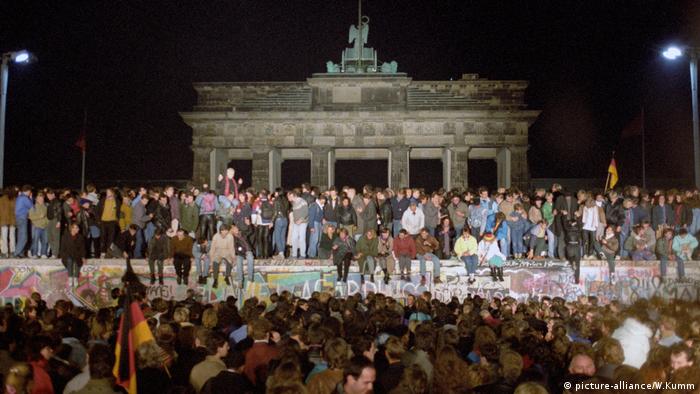 Berliners from east to west left candles and roses across Germany's capital to commemorate 28 years since the wall that had divided their city since 1961 began to come down. More than 160 schoolchildren from across the country joined 100 politicians, former citizens of the German Democratic Republic (GDR) and other invited guests at a commemoration hosted by the Berlin Wall Foundation in the capital.

Foundation director Axel Klausmeier said the Wall was not just a historical structure, but "a learning center for cosmopolitanism and tolerance — and against all forms of exclusion."

In one high-profile event, the capital's mayor, Michael Müller, led an anniversary ceremony at the Berlin Wall Memorial. Dietmar Woidke, the state premier of neighboring Brandenburg, laid a wreath at the former border between West Berlin and Potsdam, a city once walled into the GDR.

Across the country, readings, concerts, podium discussions and other events commemorated the occasion. People killed trying to escape the GDR were remembered Thursday in the Chapel of Reconciliation, which sits on what Germans have come to know as the death strip, where 44.5 kilometers, (27.5 miles) of mesh fence with no cover left refugees in a veritable shooting gallery for border guards. 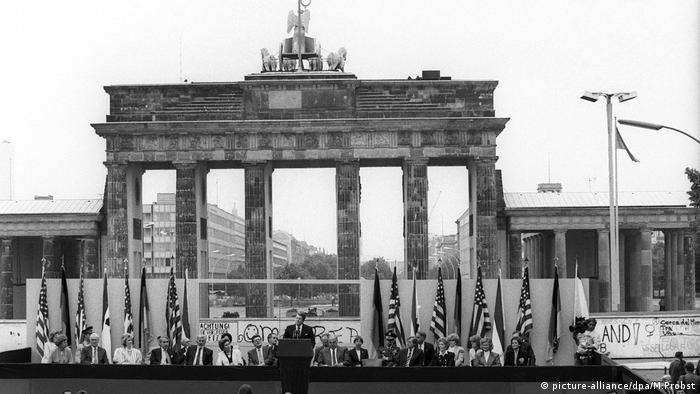 "Mr. Gorbachev, tear down this wall," US President Reagan said in 1987

On November 9, 1989 (pictured), Socialist Unity Party politburo honcho Günter Schabowski told East Germans that they would be able to travel more or less freely to the West, "as far as I know — effective immediately, without delay." That last bit was improvised and the easing of restrictions had not been meant to go into effect quite yet, but East Germans began gathering at the Wall, ready for a glimpse of the other side. Schabowski's improvised words may have helped set up the fall of the Wall and the reunification of Germany, but the country has hardly lived happily ever after.

The GDR's former political prisoners continue to find social exclusion in reunified Germany as they continue their personal battles with the trauma they experienced in the former East, the psychologist Stefan Trobisch-Lütge told the Berliner Zeitung for an article published on Thursday. "These people feel likewise left behind by today's society — and that nobody really cares for them anymore," Trobisch-Lütge said. They are, he added, "virtually the collateral damage of history."

To combat this, Petra Köpping, a Social Democrat and the integration minister of the eastern state of Saxony, has called on politicians to approach the problems of the former GDR as phenomena unique from the country's many other challenges. "We have to take care of East Germany differently," she told public radio on Thursday.