Berlin tightens COVID-19 rules for unvaccinated | Germany | News and in-depth reporting from Berlin and beyond | DW | 16.11.2021

Ahead of talks between caretaker Chancellor Angela Merkel and state premiers, some of Germany's 16 states have already tightened rules. In Berlin the so-called 2G rule is off to a bumpy start. 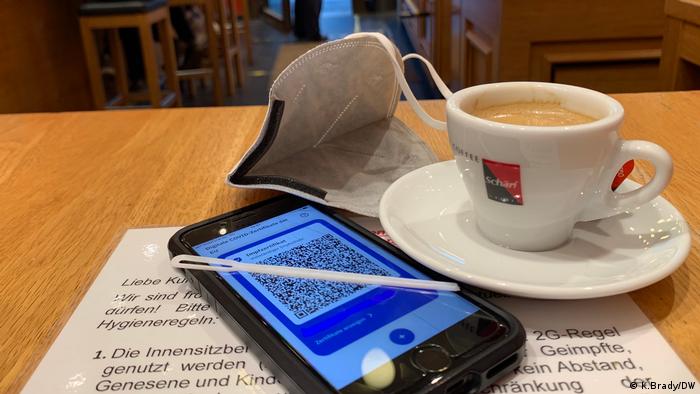 As Berlin's infamously grey winters set in, so wanes the desire of Berliners to stay outside in the biting temperatures — at least without "heizpilze" (mushroom heaters), which pop up in front of restaurants and bars in the colder months. But anyone seeking shelter inside will now have to show proof that they are either fully vaccinated or have recently recovered from COVID-19. The rule is known as "2G" ("geimpft oder genesen" — "vaccinated or recovered") for short.

A stroll through some of Berlin's 12 districts offers a snapshot of how — if at all — the 2G rule is being implemented. At a cafe close to the Brandenburg Gate, the barista asks to see a pass proving full vaccination before even ringing orders through the till. A visit to a cafe in the eastern district of Friedrichshain also looks promising: a placard on the door outlines the 2G rule in detail. But at the counter, neither proof of vaccination nor recovery appear to be a pre-requisite. Asked if they need to see a CovPass proof of vaccination, the barista replies: "Well, do you have it on you? If you have it on you, I don't need to see it."

Other eateries have also decided to circumvent the new rule by shutting up shop. Signs in the window of one restaurant in the Prenzlauer Berg neighborhood read: "Closed because of 2G! Everyone is welcome here and we don't shut anyone out." 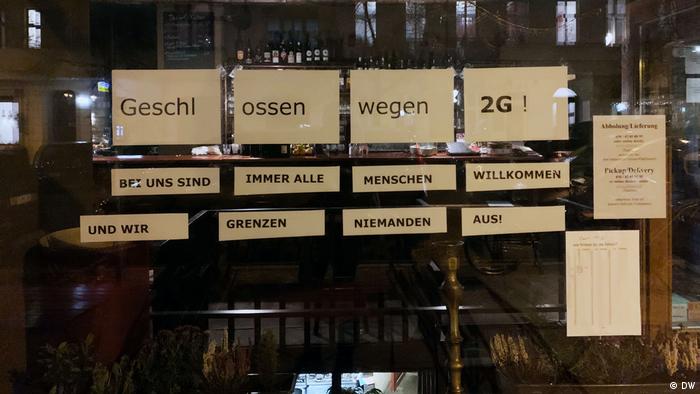 This Berlin cafe announced that it would close entirely rather than comply with the requirement to serve only vaccinated or recovered patrons, because "we don't shut anyone out"

Cinemas, theaters and museums are also required to follow the regulation. On Berlin's Museum Island, a security guard, who asked to remain anonymous, scans the QR code of vaccinated guests.

"We haven't had that many people who have recently recovered from COVID," he says. "But scanning everyone's QR code is time-consuming — particularly guests from outside the EU. Our scanners can only scan EU CovPasses. Non-EU guests have to bring their papers. There's a certain level of trust that comes with that."

Backlash from some unvaccinated

On the whole, anecdotes from around the capital point to a well-received change. "I think there's a sense of relief for some guests — and the staff too," says a waitress at a vegan doner kebab shop. "Given the speed at which the number of cases is growing, the 2G rule, instead of 3G (which allowed unvaccinated guests with a negative test to eat indoors) is an added layer of safety for a lot of people."

But not everyone's happy — not least of all the unvaccinated. In an apparent attempt to scapegoat restaurants that are following the tighter rules, suspected coronavirus skeptics have attached yellow stars — alluding to those Jews were forced to wear in Nazi Germany — to the windows of some establishments adhering to the 2G regulation.

One restaurant owner said they were "horrified" to see that the Holocaust was being instrumentalized by apparent coronavirus deniers and vaccine skeptics.

Across town, wine bar owner Vincenzo Berenyi says some guests who had been turned away after failing to prove they were fully vaccinated or recently recovered had posted negative reviews online. "I couldn't sit at my reserved table because the warden on the door wouldn't let me in," one comment read.

Local authorities are also being called upon to help ensure the new 2G rule is being adhered to. But a shortage of personnel in Berlin's Ordnungsamt (public order offices) and police force is proving to be a challenge.

Benjamin Jendro, spokesperson of the Police Union (GdP) in the district of Berlin, said public safety violations are piling up in the districts. "Processing them will still take several months because no more people have been added to the field or office staff. So at most there will be spot checks," he told DW.

"A clear 2G regulation is better than the previous mix because it creates uniformity," Jendro said. "But it's also clear that neither our police nor the district regulatory authorities can check that the 2G rule is being followed across the board."

Sabine Kinkartz contributed to this article.

The German chancellor warned the country faces several "difficult weeks" as the fourth wave of the pandemic coincides with winter. A record number of daily COVID-19 infections were recorded this week.

The number of new cases has beaten a record set in December 2020. Health officials have met to discuss the possibility of fresh restrictions for the unvaccinated.