Over 200,000 people have taken to the streets of Berlin to face down the rise of far-right populism in Germany and Europe. The protesters were demanding more solidarity with marginalized groups.

Berlin produced an absurdly hot and sunny fall day on Saturday to welcome an estimated 240,000 people demonstrating against racism and calling for solidarity against the rise of far-right populism across Germany.

A 5-kilometer (3-mile) stretch of the capital city's center, from Alexanderplatz through the Brandenburg Gate to the Victory Column, had to be closed down to accommodate the huge parade, which was united under the hashtag #unteilbar ("indivisible").

The crowds were punctuated by 40 trucks mounted with loudspeakers, some delivering political messages, others pumping out music of all genres. They also included the traditional Berlin staple: the techno truck surrounded by semi-clothed dancers. The march was bookended by two concert events, the second of which was expected to stretch into the evening.

All kinds of organizations joined in, including trade unions, NGOs, political parties (both mainstream and fringe), gay rights groups, schools and theaters, all carrying a variety of banners, each with their own cause to promote (Ryanair workers were a conspicuous presence), but all united behind the slogan: "Solidarity not marginalization." 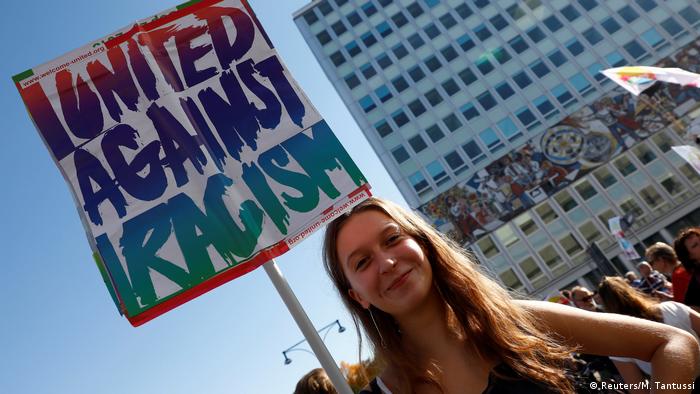 The number of people who made the original call to join Saturday's demo would have made an impressive crowd themselves — some 10,000 organizations and individuals signed the declaration last week, which began with a note of alarm at the current trend in Germany's political debate: "A dramatic political shift is taking place: Racism and discrimination are becoming socially acceptable," it read. "What yesterday was considered unthinkable and unutterable has today become a reality. Humanity and human rights, religious freedom and the rule of law are being openly attacked. This is an attack on all of us."

The declaration went on to attack the effects of global capitalism: "Millions suffer the impact of an underinvestment in basic care, healthcare, childcare and education."

There was a widespread feeling in the crowd that such a mass statement was a vital correction in a country that has seen ordinary people joining far-right, even neo-Nazi protests, and several conservative politicians adopting anti-immigrant rhetoric.

"There are people here who want to show that they don't support what is going on in Germany, including from established politicians, all this hate, this whole debate about immigration," said Rola Saleh, a social worker who helps young refugees in the eastern city of Chemnitz, where far-right violence made international headlines in late August. 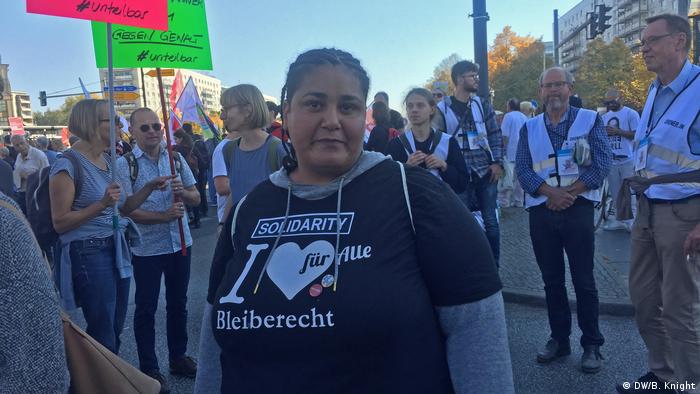 Saleh, who was in Berlin to give a speech for her group Jugendliche ohne Grenzen ("Youth without Borders"), told DW that refugees and people helping them were being "criminalized" in Germany.

"At the moment, a new police law is being planned in Saxony that would allow our advice center, where we give refugees legal advice, to be spied on," she said. "These are things that are happening now: deportation custody, 'anchor centers', the marginalization of refugees."

"We don't have answers to a lot of the questions that the refugees ask us," she said. "After the conflicts in Chemnitz, a lot of the refugees are afraid and uncertain about the situation. They feel like they've been abandoned; a lot of them are trying to leave Saxony, or they're afraid they'll be provoked into criminal acts by a situation. If you feel like you live in a state where the police are not ready or able to help you, you start thinking about finding ways to protect yourself."

Julia Naji joined Saturday's protest to represent Cycling Friends, a Berlin initiative that, among other things, runs cycling classes for refugees. "Today, people will meet up and show that we should fight against racism and homophobia as loudly and with as many people as possible," she told DW. 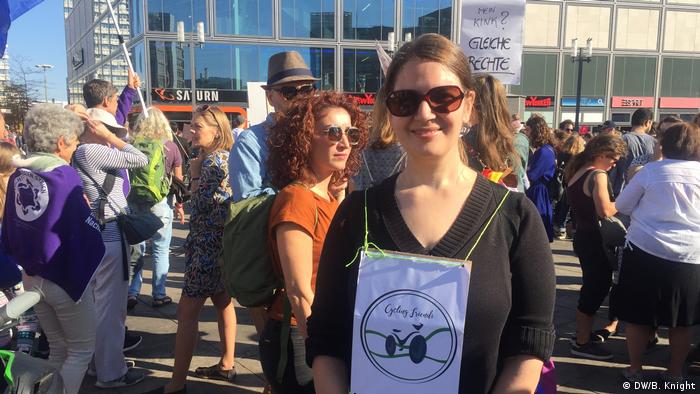 She emphasized that most of the refugees she sees are happy living in Berlin. "Most of them feel quite welcome here and are astonished about the very small portion of the society being against them," she said.

Naji, a German with a Syrian father, says the politics of far-right parties like the Alternative for Germany (AfD) are aimed at personally marginalizing her in her own country. "I'm a German, but I myself would feel excluded from any politics and any society that does not open itself to everyone," she said.

Senior government figures lent their support to the demonstration, most notably Foreign Minister Heiko Maas, who tweeted: "It is a great signal that so many people are going on the streets and showing a clear position: We are indivisible. We won't let ourselves be divided — certainly not by right-wing populists."

While Maas' Social Democratic Party (SPD), along with the Greens and the socialist Left party, all offered official support, Angela Merkel's Christian Democratic Union (CDU) was absent on Saturday.

But there was some political dissent on the left too, especially from Left party leader Sahra Wagenknecht, who angered plenty of people by declaring that she would not be taking part in her party's section of the demo.

During a podium discussion in Berlin on Tuesday night, Wagenknecht said she found the demo's position problematic, since she claimed it called for "open borders for everyone." This, she said, marginalized people who were against open borders but also against racism. There is no mention of open borders in the demo's official declaration, though some people on Saturday were carrying banners that read, "Make Fortress Europe Fall."

Wagenknecht has held a somewhat isolated position in her party since beginning her own separate left-wing movement, named "Aufstehen" — or "Stand up."

A string of alleged or openly racist attacks on minorities in Italy has fueled a debate about whether the country has a growing problem with racism and xenophobia. Ylenia Gostoli reports from Rome. (16.08.2018)

The arrival of hundreds of migrants at Spain's southern border has set alarm bells ringing. While the government has weathered the storm so far, a worrying trend is noticeable. Santiago Saez reports from Madrid. (10.08.2018)