The raid is the latest effort by German authorities to clamp down on crime families in large cities. Authorities searched more than a dozen establishments in the neighborhoods of Neukölln and Moabit. 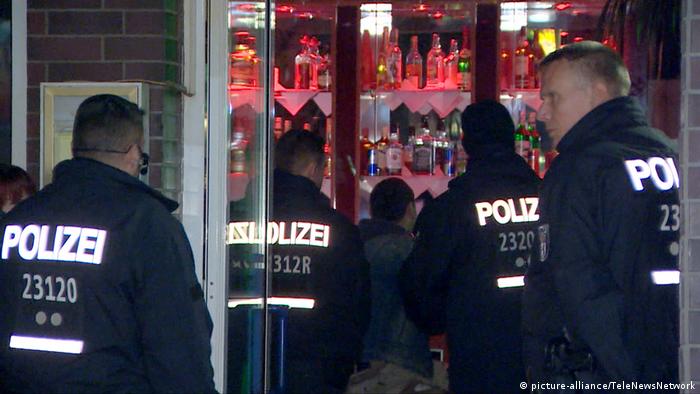 On Wednesday, police in Berlin carried out one of their largest raids against organized crime in the German capital. Authorities said the raids were intended to clamp down on what they described as "criminal parallel societies," which, they say, consist predominantly of people of Arab or Eastern European descent.

The raid comes in the wake of similar crackdowns that took place in Germany's most populous state, North Rhine-Westphalia. Police are trying to address a problem that affects the country's urban hubs, where so-called clans, or large criminal families, are suspected of involvement in drug trafficking, forced prostitution and other illegal activity.

More than 300 agents participated in the Berlin raid, which lasted several hours and took place in the neighborhoods of Moabit and Neukölln.

Local authorities were also on the scene, led by State Interior Minister Andreas Geisel and Neukölln district Mayor Martin Hikel, both of whom are part of the Social Democratic Party (SPD).

Some 10 jewelry stores and travel agencies were inspected for tax irregularities, and authorities reported 17 violations, the daily Berliner Zeitung reported.

In one of the travel agencies, police confiscated thousands of euros on suspicion of money laundering.

Six shisha bars and three pubs were also searched. Tax fraud and illegal sale of water pipe tobacco were registered. Authorities closed one of the shisha bars for multiple violations, including drugs at the scene, which led to a 29-year-old man's arrest.

State Interior Minister Geisel thanked the police for their efforts. Police in turn lauded public officials' cooperation in the common fight against the clans. But Geisel warned that more work lies ahead, as criminal structures cannot not be broken up overnight.

Not everyone in the city was celebrating. According to Berliner Zeitung, Marcel Luthe, the spokesman for the parliamentary group of the Free Democrats (FDP) in Berlin's House of Representatives, criticized the raid as a public relations move.

"Instead of targeting the source of money," Luthe said, Geisel "was again organizing dubious public relations events at a great public expense."

"The police are not a public relations tool," he added, saying that the raid was diverting resources from actual policing in nearby crime-ridden areas.