Germany will not subsidize the sale of electric cars, but it will provide funding for research in the area of electric mobility, government officials told auto and energy executives in Berlin on Monday. 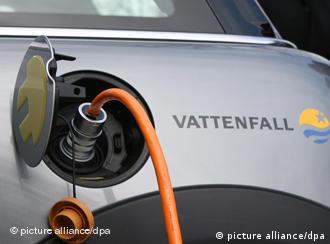 The focus on research will help strengthen the competitiveness of German carmakers and suppliers, senior officials emphasized at a summit with industry executives, scientists and other experts on the topic of electric mobility.

German Chancellor Angela Merkel said mobility in the future has to be more "resource independent, environmentally friendly and sustainable," adding that Germany is well positioned to keep abreast of global developments.

The decision not to offer consumers incentives to buy electric cars, however, flies in the face of German carmakers, who had lobbied hard for such support. Stefan Bratzel from the Center of Automotive Technology at the University of Applied Science in Bergish Gladbach said incentives, such as tax cuts and premiums, can be "an effective" way to kick-start demand for products using new technology.

In the run-up to the meeting, senior government officials including transportation minister Peter Ramsauer had already voiced their preference for supporting research instead of providing incentives. And many industry experts agree with the approach.

"The main suppliers of electric cars today are the Japanese," said Ferdinand Dudenhoeffer, a professor at the University of Duisburg-Essen and director of its automotive research center. "Why support the sale of Japanese cars? Germany needs to invest in research and development if it wants to be powerful global competitor in this sector." 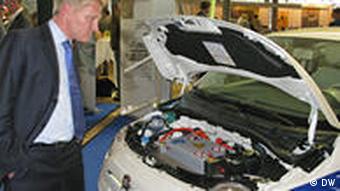 But if electric cars are the future (oil supplies are limited, after all) and Germany wants to be a key player, the country needs to plug into this nascent electric mobility market fast, observers agree. While the federal government last year approved billions for its cash-for-clunkers program to spur new car sales, other countries have launched programs worth billons of euros to promote electric vehicles.

Under its "National Program for Electric Mobility," Germany aims to put 1 million electric cars on the road by 2020. The country currently has around 45 million registered cars. The public-private program, agreed last year, has so far distributed government funds of 500 million euros to 150 projects over a three-year period through 2011. It can also tap into funds from another 200-million-euro research and development (R&D) program, which runs from 2005 to 2012. The German auto industry pledged to spend a “substantial” amount of its planned annual 20-billion-euro R&D budget, but did not name an exact figure.

By comparison, France plans to have two million electric and hybrid electric-internal combustion cars on its roads by 2020. The government has agreed to invest 1.5 billion euros in infrastructure and the development of new electricity-powered vehicles. The US, under its American Recovery and Reinvestment Act, has earmarked $2.4 billion (1.8 billion euros) to support the development of electric cars.

Both countries have large auto industries that are trying to catch up to Japanese carmakers, which have taken a lead not only in developing new electric and hybrid cars but also in selling them to consumers. And both offer consumers incentives: France 5,000 euros and the US around 5,500 euros.

The market could be huge. A study conducted by Dudenhoeffer projects that of the 87 million cars sold globally in 2025, nearly 56 million will be hybrid or battery-powered vehicles.

The challenges facing electric cars, however, are many. Batteries, arguably, are the biggest. Some of the first small-series production cars are equipped with batteries with a capacity of 16 to 12 kilowatt hours, or the equivalent energy content of about two liters of fuel. This can provide a driving distance of about 100 kilometers or more but only under slow driving. Performance drops quickly when drivers speed up or turn on the heat or air-conditioning.

There are other concerns. Some question the "zero" emission rate of electric cars. Although the electric car itself emits no emissions, the electricity required to power the batteries does. And if it is produced by coal, the carbon-footprint is substantial. The German Automobile Club (ADAC) has calculated that Daimler's mini-car Smart emits 86 grams of carbon dioxide per kilometer with a diesel motor, compared to 107 grams with an electric motor powered by a battery that has been charged with electricity from coal power plants.

In fact, Juergen Resch, head of the Berlin-based environmental organization Deutsche Umwelthilfe, argues that the government should focus not on supporting electric cars but on lowering carbon dioxide emissions from vehicles with combustion motors or with batteries that have a huge carbon footprint.

"It's really all about CO2, so we need to look at the size and weight of cars and at their fuel efficiency," he told Deutsche Welle. "And when it comes to electric cars and their batteries, we need to look at the energy mix and the level of renewables." Resch is in favour of incentives that encourage consumers to buy low-emission vehicles – whether they are equipped with internal combustion or electric engines.

Dudenhoeffer supports government initiatives that strengthen the competiveness of Germany's auto industry as it enters a new era of mobility. And he argues that the industry hasn't "missed the boat" on electric cars, as many other experts maintain.

"Daimler, BMW, Opel and Ford in Germany have done quite a lot in the area of electric cars already and can compete internationally, but Volkswagen still has some catching up to do," he told Deutsche Welle. "And when it comes to storing electricity – essential for electric cars to succeed – Evonik is a global leader in lithium-ion batteries."

Daimler teams up with Renault and Nissan

German carmaker Daimler has entered into a "broad strategic agreement" with Renault and Nissan aimed at developing a new generation of small cars, sharing engines and cooperating on small commercial vans. (07.04.2010)

The world's biggest auto show has begun in Detroit, with a renewed sense of optimism among carmakers after a tough 12 months. German manufacturers are present with a strong emphasis on hybrid and electric designs. (12.01.2010)

Technicians at the Bochum University of Applied Sciences are revving their new BOcruiser solar-powered engines for the World Solar Challenge in Australia. The solar car racing event showcases cutting-edge technology. (23.10.2009)