Berlin may increase aid to drought-stricken Horn of Africa | Germany| News and in-depth reporting from Berlin and beyond | DW | 26.07.2011

Berlin may increase aid to drought-stricken Horn of Africa

Germany may increase its aid contribution to the Horn of Africa as the humanitarian situation there deteriorates due to a drought and famine. Berlin has rejected criticism that it has not done enough to help the region. 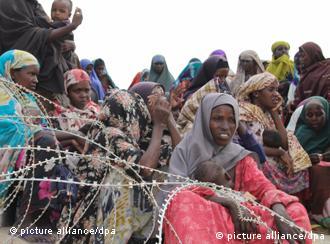 Somali refugees are fleeing the famine for Kenya

Berlin may consider increasing aid money to the drought-stricken Horn of Africa after being accused of not contributing a large enough share to the international efforts aimed at containing the famine in Somalia.

Germany's Africa commissioner Günter Nooke said that his government would "not allow people to die if it was really just a question of money."

The UN estimates that tens of thousands have already died and millions more are on the brink of starvation as a consequence of the region's worst drought in 60 years. Djibouti, Ethiopia, Kenya and Somalia are affected. The UN has officially declared a state of famine in two regions in Somalia.

Germany has already doubled its contribution to 30 million euros ($43 million). The UN has called for the world community to donate 1.4 billion euros, half of which has materialized. 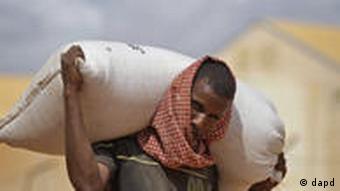 Berlin came under criticism after statistics from the UN's World Food Programme (WFP) showed Germany fell behind nations such as Japan and Canada in its donations.

"At the moment the speed [of delivery] has not failed do to a lack of sufficient means," said Markus Löning, the German government's human rights commissioner.

Löning said the "sheer dimensions of the catastrophe" was the problem, which surprised even UN relief organizations.

"Now we have to focus on making sure that aid gets to where it needs to be," Löning said. "I don't think it is right to let this deteriorate into a political fight."

The WFP was preparing on Tuesday to airlift food to the Somali capital, Mogadishu. The airlift, however, has been hampered by last minute paper work in Kenya.

Delivering food to Somalia has proven difficult due to mixed messages from the Islamic militant group al-Shabab, which controls a large swath of the southern part of the country.

The group banned foreign aid workers from entering its territory in the past, but has indicated that it may be willing to grant international aid organizations access to help contain the famine.

The UN food and agricultural chief has called for "massive" action to aid the drought-stricken Horn of Africa. Millions are at risk of starvation, but aid agencies are saying the global community isn't doing enough. (25.07.2011)

As the German government considers extra aid for drought and famine stricken countries on the Horn of Africa, an aid group has said Germany has a track record of giving less to Africa than to other continents. (22.07.2011)