Thousands of protesters have marched through the German capital in solidarity with the latest global climate strike. Demonstrators of all ages called on the German government to improve its climate policy. 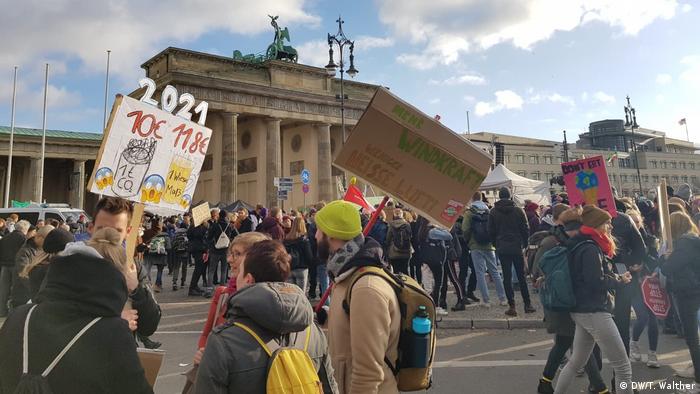 Even the biting chill of Berlin's already wintery fall weather wasn't enough to hold protesters back on Friday as they took to the streets in their thousands to demand more action against climate change.

One group of students even plunged into the icy waters of the Spree River, holding up a white box in a symbolic attempt to rescue the government's climate-change package.

The latest global climate strike comes just three days ahead of the COP25 Climate Change Conference in Madrid. People were set to march in 2,400 cities across 157 countries.

At Berlin's iconic Brandenburg Gate, protesters of all ages were out in force to make their voices heard. Strollers were lined up in rows, their tiny occupants hidden under placards; office workers bundled up as they "took an extended lunch break,"  while the familiar seasonal smell of mulled wine wafted over protesters from one well-prepared group of pensioners holding the poster "Grandmas for climate protection."

Also very obviously present was the Fridays for Future Movement, inspired by Swedish climate activist Greta Thunberg. The German branch of the movement is behind thousands of German schoolchildren not going to lessons every Friday for almost a year.

Their demands include putting an end to fossil fuel subsidies, switching off a quarter of all coal-fired power stations and developing renewable sources to cover 100% of Germany's energy needs by 2035. 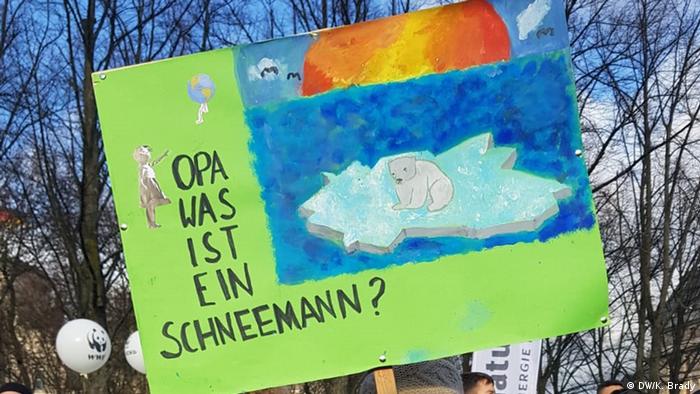 A placard held by one 12-year-old protester reads: 'Grandad, what's a snowman?"'

A relative newcomer to the marches, 12-year-old Liv, was attending for the second time.

"I think that without Greta Thunberg, we wouldn't have all been here striking. We learnt about climate change in school, but Greta opened our eyes," she said. A homemade placard wobbled above her head: "Grandad, what's a snowman?"

After learning more about climate change, Liv and her brother have now changed their family’s holiday plans. "My parents wanted us to visit my aunt in Australia, but my brother and I didn't want to fly all that way because of the CO2 emissions." Instead, the family is taking a vacation on Germany's Baltic Coast.

The courage and perseverance of the schoolchildren was something to be grateful for, said 59-year-old businessman Andreas. He and a small group of fellow entrepreneurs were taking the opportunity on Friday to share the measures they have implemented in the workplace to combat climate change.

"One of the biggest measures, of course, is using green energy," he says, adding that his colleagues are now secured a monthly public transport pass and that his company is working to avoid replacing old computers and hardware whenever possible.

"The measures that they're proposing simply aren't enough. The government needs to have more courage and not always concentrate only on the economic effects," he said, adding that Germany's auto industry had failed to prepare itself for a digital and carbon-neutral future. 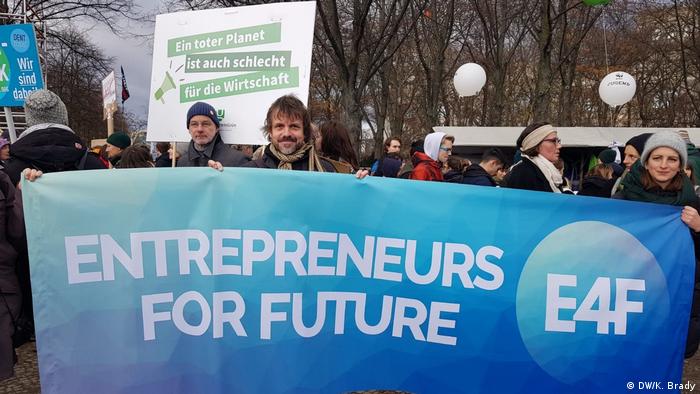 Across town on Friday, the Bundesrat — Germany's upper house of parliament — voted on the raft of measures aimed at cutting greenhouse gas emissions by 55% by 2030, compared to 1990 levels. The package was approved by the lower house earlier in November.

The climate protection law, an increase in aviation tax and the introduction of an initial CO2 price of €10 ($11) per ton were all approved on Friday, but the Bundesrat is now seeking a compromise on cost-sharing between Berlin and states.

"It's just not enough," said protester Meike Schützek. Protesting alongside her colleagues from Ocean Now on Friday, she criticized members of the German government for sitting in their "ivory towers" where the effects of climate change are not being felt. "We urgently need to do more to protect our oceans from all of the plastic," the 43-year-old said. 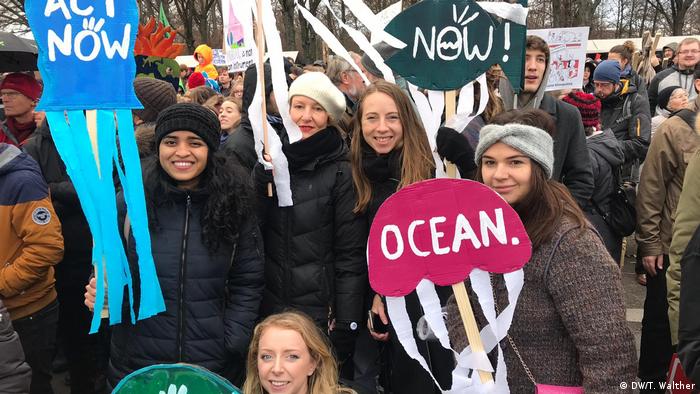 Her colleague, Divya Murthy, said that Germany needed to assert its role and responsibility in tackling climate change.

"The places that are feeling the effects of climate change the most are developing countries," 29-year-old Murthy said. "So it's the responsibility of developed countries like Germany to do something about it."

After Friday's global protests, all eyes are now looking to the COP25 climate conference in Madrid. Negotiators from some 200 countries will meet for two weeks, starting on December 2, in the hope of setting out clearer rules on how to meet the requirements of the 2015 Paris Agreement on climate change.