That history is all around us is … well, old news. And arguably nowhere more than in contemporary Germany. But even here, there are times when the past emerges with unexpected force, as Tamsin Walker found out.

In the final days of last year and the first of this, I made a pact with myself to spend more time on foot. To take long walks as a means of creating time to ponder at my own pace, to slow life down. I like the idea of slower. So I've been loyal to my promise. Been walking like I mean it. Hit my stride, so to speak.

At the weekend, I took it — my stride, that is — and my kids out of town into Brandenburg, the state that surrounds Berlin. After misreading a map to nowhere in particular, we pulled off the road into a village perched on the reedy banks of a silent lake. At the turning, beside a red-brick and flint church, was a large sign showing a drawing of emaciated figures in blue-and-white striped shirts.

It was in tribute to the 6,000 prisoners murdered by the SS as they were forced to march northwards from the Sachsenhausen concentration camp on the outskirts of Berlin during the very final days of the Second World War.

The route they had to walk took them through the village we'd pulled into. For all its sleepy appearance, the tiny dot of land we'd chosen at random for an unsuspecting Sunday constitutional was mired in the murky depths of history. And even deeper than first met the eye.

'Get us out of here'

A few meters up a woodland track, we found a place to park and were just about to set off when two signs caught my eye. One to our left warned that to take a step further would be to risk our lives on the horns of a free-roaming bull, while the one on the right promised the same fate from unexploded munitions. 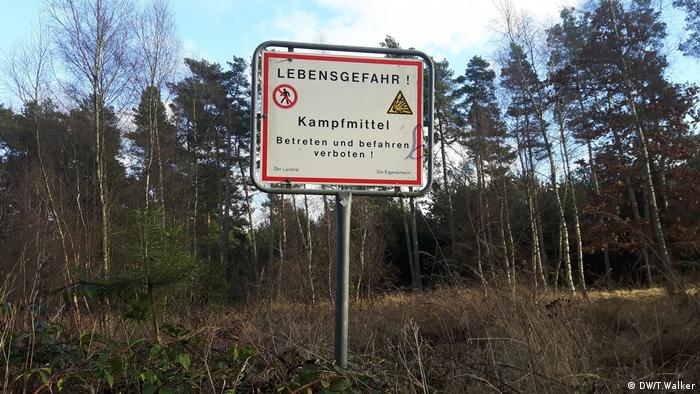 The woodland ordinance warning was the sign that kept on giving

The children didn't hold back in their pleas to return to the road. But once there, they only had a moment of respite, because the woodland ordnance warning turned out to be the sign that kept on giving. For kilometer after kilometer, we trundled down a road flanked with explosive alerts. We were, I discovered afterward, trundling through a former Bombodrom.

Soviet forces established the 120 kilometers of heathland as a bomb release area in 1952 and routinely used it as such until 1993, when they finally pulled out of the former East, leaving the government of the newly unified Germany to do with the land what it would. The initial plan was for more of the same. But in 2010, after years of roaring resistance from local communities, Berlin eventually decided to let nature reclaim the former military zone. A happy ending then?

Yes and no. Because as is the way with history, it tends to live on. And the Bombodrom, where an estimated 1.5 million unexploded grenades and bombs still lie in wait beneath the surface, is no exception. It will be years before I can stretch my walker's legs on that particular heath.

In the meantime, on that same trip, I noticed yet another sign pointing to visit a battlefield where Sweden secured a bloody victory during the Thirty Years' War. This one, though, was entirely non-alarmist. Just a quiet invitation to ponder as I wander through the heart of the past.