Berlin and beyond: A Sorbian Easter

Around 100 kilometers south of Berlin is an area of land characterized by a labyrinth of more than 200 small canals and the Sorbs, a Slavic minority whose Easter traditions run deep. Tamsin Walker went to explore.

The first time I came into close contact with the Spreewald was during the research for a documentary. I spent hours in a dark room at the film archives in Berlin watching black and white footage of Sorbian women and girls sitting in clusters to perform feats of decorative intricacy on hard-boiled eggs, and of earnest men punting plump harvests of pumpkins and gherkins up and down idyllic sun-mottled waterways.

It was as captivating as it was other-era.

But it's also this era. The punts and the waterways, which stretch to a collective length of more than a thousand kilometers, are still every bit a part of life in this corner of Germany. So too the gherkins, which are sold pickled, deep-fried and in shandy or schnapps, and those brightly colored hand-painted eggs, that come into their own at this time of year.

Read more Berlin and beyond: City of singles

Bärbel Lange, who has been crafting Sorbian Easter egg designs for almost 50 years and teaches many a shaky-of-hand yet willing novice, has agreed to show me how it's done.

Her workshop, which amounts to a table in a little shop in the historic center of Lübbenau, plays happy host to free-range eggs, neatly trimmed and shaped pigeon feathers, dyes, waxes and naked flames. 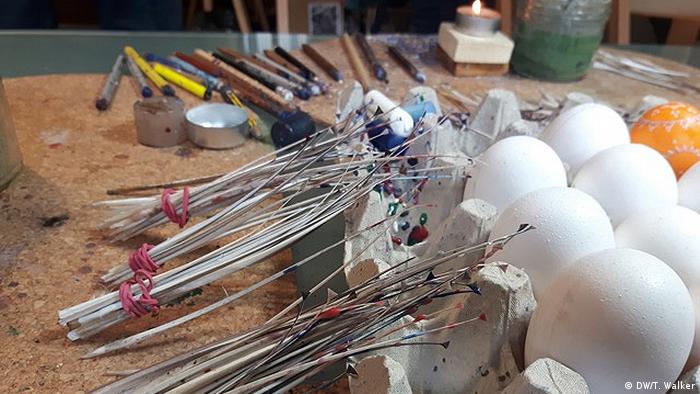 Tiny pigeon feather tips are used to dab shapes of wax onto the eggs, which are then dipped in pots of dye

The whole place is testimony, not only to her craftwomanship, but to a rich and vibrant tradition, reputed to date back to the 17th century, that has endured the test of what have often been unforgiving times.

Under the Nazis, Sorbian culture and language was suppressed, its teachers, associations and clergy banned. And though during the years of Germany's internal division, the ethnic minority was constitutionally protected, and bilingual street signs and schoolrooms were not uncommon, large areas of local land were claimed for lignite mining. Village after village was cleared to make way for the giant machines.

These days some 60,000 Sorbs live in the states of Saxony and Brandenburg. Just half of them are believed to have some command of one of the two traditional tongues: Upper and Lower Sorbian.

As I sit with Bärbel, who guides me to colors as lively as the stories she shares — tales of Easter traditions, of processions, elaborately embroidered dresses, men on horseback and girls who fetch pre-dawn water to sprinkle in their communities as a means of ensuring good fortune — a couple of locals come into the shop. One reveals himself, through a burst of song, to be a Sorbian speaker. 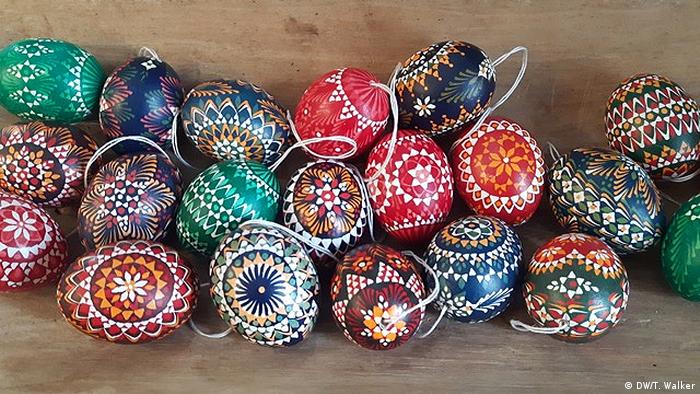 Admittedly, the shapes I've applied with my dabbler's hand are a perfect example of imperfection, but in combination with each other, I'm assured they stand for protection of the family.

I like that symbolism. And it brings to mind those clusters of women and girls from the old reels of black and white film, who very possibly sat in the same building as I, painstakingly, one fleck of melted wax after another, ensuring a beautifully rich tradition would remain alive long after they had gone.

Berlin and beyond: Cold comfort city?

Though regarded across Germany as rude and rough, Berliners see themselves as direct but soft-hearted. Tamsin Walker went to find where the truth lies. (23.02.2018)

WorldLink: Berlin and beyond - A Sorbian Easter

How a Berlin Christmas exhibition focuses on diversity 19.12.2021

What is Christmas like in prison, and how did the "Jolka Festivity" in the Soviet Union reinterpret the holiday? An exhibition explores all aspects of the holiday.