Bellingcat and Navalny present evidence linking Russian FSB to poisoning | News and current affairs from Germany and around the world | DW | 14.12.2020 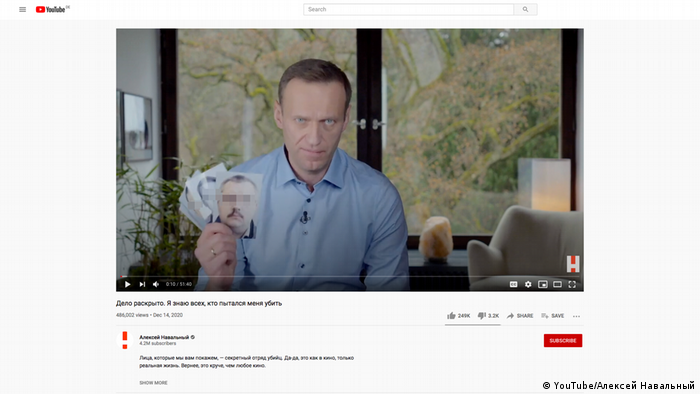 A team of agents in the Russian Federal Security Service (FSB) was behind the attempted killing of Alexei Navalny, the Russian dissident himself alleged on Monday.

Navalny, an anti-corruption activist and Kremlin critic, presented telephone and airline passenger records as evidence that the FSB group — the main successor agency of the Soviet-era KGB — was behind the poisoning, in a video posted on YouTube.

Navalny fell dangerously ill on a flight from Siberia to Moscow in August. He was first taken to a hospital in Omsk, in southwestern Siberia and later flown to Berlin for treatment.

German French and Swedish laboratories have determined he was poisoned with a Soviet-era Novichok nerve agent.

A member of the FSB group allegedly involved in the attempted murder reported directly to Russian President Vladimir Putin. Details from the joint investigation involving Bellingcat, Russian website The Insider, German newspaper Der Spiegel and the broadcaster CNN were released on Monday.

The outlets are conducting an ongoing investigation to find out who was behind the poisoning.

The claims from Bellingcat, its partners and Navalny came a day after British newspaper the Times alleged the Kremlin tried to poison outspoken Russian opposition figure Alexei Navalny a second time after the first attempt failed.

Navalny has long held the Kremlin responsible for his poisoning — a claim Moscow has repeatedly denied.

What does this latest evidence show?

The team of agents from the FSB appears to have tried at least two other times to poison him with the chemical weapon Novichok, Navalny claimed in the online video.

The two previous times were unsuccessful because the dosage was too small, Navalny alleged.

He claimed that the hit squad had to be careful not to use too much of the poison because an instant death would have been too easy to investigate.

The investigation identifies FSB operatives Alexey Alexandrov, Ivan Osipov — both medical doctors — and Vladimir Panyaev who followed Navalny to the Russian city of Tomsk where he was ultimately poisoned, along with others.

Navalny and the investigative outlets, including Bellingcat, presented telephone metadata, overlapping flight records and previously leaked offline databases as evidence for their claims.

For example, the Bellingcat investigation states that FSB operatives had tailed Navalny since 2017 "traveling alongside him on more than 30 overlapping flights to the same destinations."

"Given this implausible series of coincidences, the burden of proof for an innocent explanation appears to rest purely with the Russian state," the Bellingcat investigation concluded.