Four independent journalists who have been critical of President Alexander Lukashenko face seven years in prison on charges of "large-scale tax evasion." Journalists have been detained 477 times this year in Belarus. 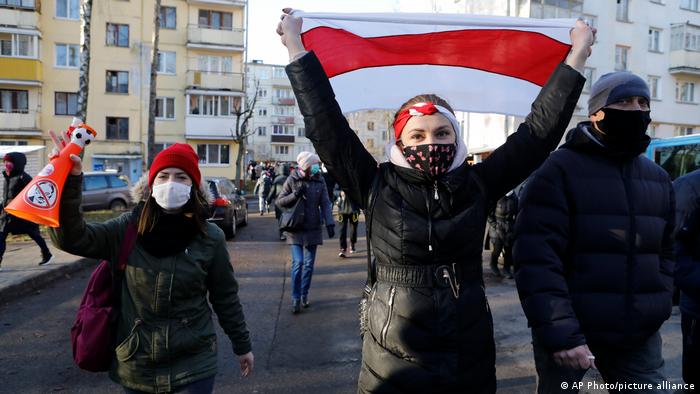 Four staff at an independent Belarusian press association have been charged with tax evasion, a lawyer for the group's founder said Thursday.

Yulia Slutskaya, a journalist who founded the Belarusian Press Club in 2016, has been charged with "large-scale tax evasion," her lawyer Anton Gashinsky told AFP news agency. She will remain in pretrial detention until February 23.

Slutskaya is also a member of the board of the Belarus Association of Journalists (BAJ). She was detained last week when she returned to Belarus from holiday abroad.

The press club's director Sergei Olshevsky, program director Alla Sharko and Slutskaya's son Pyotr Slutsky have all been charged as co-conspirators. They face up to seven years in prison.

The former Soviet state has been gripped with protests since August. Opposition protesters say Alexander Lukashenko, who claimed victory in the presidential election and who has held power for 26 years, rigged the election.

Journalists have been detained 477 times this year according to the BAJ, including a DW correspondent, and many foreign journalists have had their accreditation revoked.

Mogens Blicher Bjerregard of the European Federation of Journalists called on the European Union to "react vigorously" and help secure the release of Slutskaya and her colleagues.

The EU sanctioned Lukashenko' regime earlier in the year. The UK and Canada bestowed a Media Freedom Award on the BAJ in November for its "perseverance and self-sacrifice in the face of increased targeted crackdowns on media" in Belarus.