Police in Belarus detained more than a dozen journalists who had been covering the protests in Minsk for document checks. DW correspondent Alexandra Boguslavskaya was among them.

Deutsche Welle reporter Alexandra Boguslavskaya was detained along with almost three dozen other journalists by Minsk police for document checks on Thursday. She was subsequently released after several hours in custody.

The journalists had been preparing to cover an evening anti-government demonstration in Minsk. 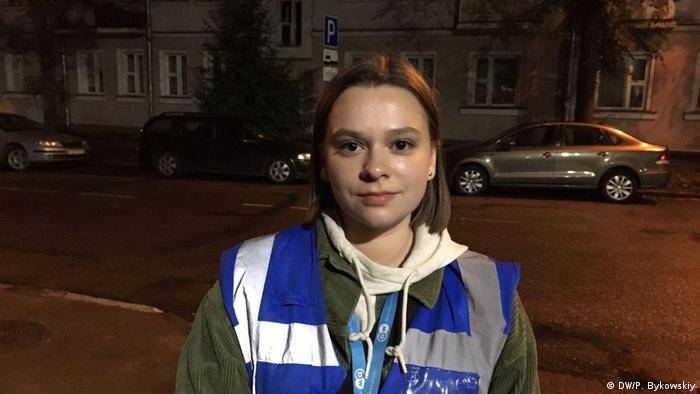 Details of the detention

The examination of Boguslavskaya's documents took from around 7 p.m. local time until shortly before 1 a.m. According to Belarus law, checking personal details should not take longer than three hours.

Boguslavskaya said that unknown persons in civilian dress, wearing face masks, had demanded that she and the other journalists unlock their smartphones.

Only after these people had viewed photos and videos — and apparently deleting some material — were the journalists allowed to leave the police station. Boguslavskaya refused to unlock her phone, delaying her release. The phone was then confiscated overnight.

Boguslavskaya did not receive an official explanation as to why she was detained. However, she was informed that an "administrative process against her for working as a journalist without accreditation" had been initiated. Boguslavskaya, who has valid media accreditation, had presented all the necessary paperwork.

She reported that she was not able to see a lawyer or make a phone call. She did confirm she had been "treated well," but had been "fairly nervous."

A representative of the independent and dissident "Belarusian Journalists' Association," Boris Gorezkij, told DW that "police had made targeted arrests against journalists ... with the aim of preventing them from reporting on protests."

DW correspondent in Belarus Nick Connolly had confirmed Boguslavskaya's detention in a tweet before her release.

Mass protests calling for President Alexander Lukashenko to step down have gripped Belarus since the 65-year-old's reelection in disputed polls on August 9. The opposition alleges the vote was rigged and has urged protesters to keep up the pressure to force political change.

Security forces have rounded up thousands of people since the demonstrations began. Hundreds of detainees said that they had been beaten while in police custody.

"Reports about the new wave of detentions of journalists reporting from #Belarus are just sickening," Lithuanian Foreign Minister Linas Antanas Linkevicius said on Twitter, calling it "yet another proof that de facto authorities simply do not care about any international commitments."

Press freedom organization Reporters Without Borders condemned what it called "this umpteenth case of media harassment" by Belarusian authorities, and demanded the journalists' immediate release.

Alexander Burakov has been released after spending 10 days in detention. He told DW his arrest was linked to the authorities' efforts to hinder independent journalists from covering the presidential election.

The Russian president says his Belarusian counterpart has asked for security assistance, should the situation spiral out of control. However, Vladimir Putin said he would not do so unless absolutely necessary.