During the Second World War, the Nazis systematically used Beethoven's music for their political purposes. Afterwards, dictators and freedom fighters worldwide discovered his works for themselves in equal measure. 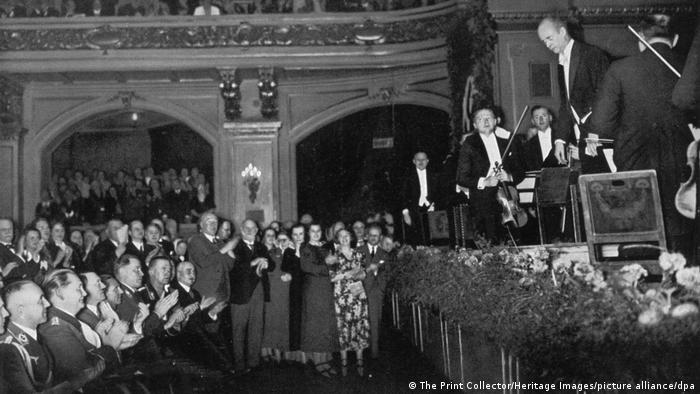 In 1945, Ludwig van Beethoven's opera Fidelio was performed in Vienna as a sign of liberation. The Allies had won the war against Nazi Germany. Seven years earlier, the National Socialists had celebrated the opera as a "victory opera" in newly occupied Austria.

Hardly any other composer in history has been instrumentalized for political purposes as much as Ludwig van Beethoven. His music has served both dictators and freedom fighters around the world as confirmation of their respective political views.

"The secret of this music is still being discussed even today," says musicologist Michael Custodis from the University of Münster in an interview with DW. "International appropriation has a very complex cultural history about which we still know little and for which we have yet to develop models to explain." 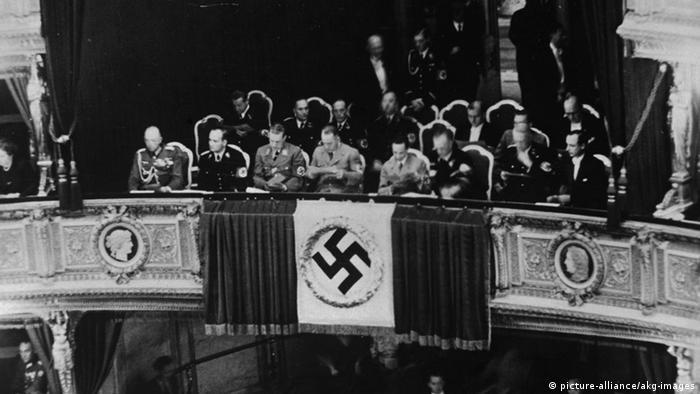 The National Socialists instrumentalized Beethoven for their propaganda purposes. They were interested not only in his music, but also in his attributes as a composer and human being. Beethoven was considered a hero who had overcome the fate of his deafness. He was also admired as a German musical genius.

The fact that Beethoven also stood for values of the French Revolution such as freedom, equality and brotherhood did not bother the Hitler regime. "Dictatorships have never had a major problem with appropriating the historical narrative and, when in doubt, simply rewriting it," said Custodis. "In addition, National Socialism always staged itself as a revolutionary movement." 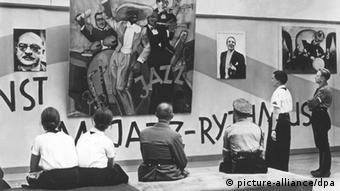 An exhibition on "Degenerate Art" in the 1930s. Nazis frowned upon jazz

A revolutionary movement that — at least musically — wanted to tie in with old traditions, such as that of Beethoven and composer Richard Wagner. Nazi Propaganda Minister Joseph Goebbels founded the "Reich Chamber of Culture" with the subdivision "Reich Chamber of Music" to bring together these musical events. Its first president was composer Richard Strauss, who served as cultural figurehead of the dictatorship. Works by Jewish composers or political opponents were banned as "degenerate music."

German Emperor Wilhelm I had already paved the way for culture and music to be appropriated by the government when he founded the Reich in 1871. He put an end to the romantic idea that music and politics belonged to two strictly separate worlds. The international recognition of composers such as Beethoven, Wagner, Brahms and Bruckner played right into his hands in that regard. 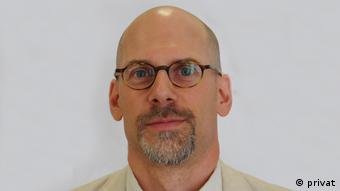 Michael Custodis has delved into music in the Nazi era

"The Kaiserreich took over the management of this cultural legacy, spending money to build on the status that the German music repertoire had acquired internationally in concert halls and on opera stages," explained Custodis.

In addition, German music was played in the colonies in Africa and China — not least to convince the "foreign cultures" of the value of German culture in a missionary manner.

The National Socialists continued with this tradition. German songs resounded in Brazil and Chile, and the Berlin Philharmonic Orchestra went on foreign tours, calling themselves the "Reich Orchestra." Conductors such as Wilhelm Furtwängler and Herbert von Karajan filled the great concert halls around the world with Beethoven's orchestral works. 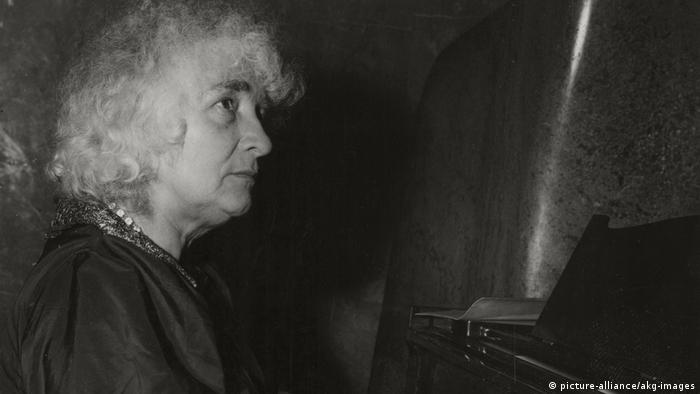 Later in the war it was pianists like Elly Ney, Wilhelm Kempff and Walter Gieseking who gave propaganda concerts and aimed to strengthen the stamina of the troops at the front by way of Beethoven's piano sonatas.

Who does Beethoven belong to?

That Hitler wanted to dominate the world became clear during the Second World War at the latest. Culturally, the occupied nations were divided. On the one hand, they strictly rejected German symphonic music during the war; on the other, they played precisely this music in protest. "The Germans were denied the right to appropriate composers like Beethoven," Custodis pointed out. 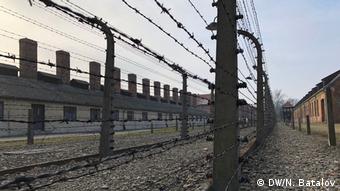 At the Auschwitz concentration camp, Fania Fénelon played in the "girls' orchestra" and survived the Holocaust

With its three short notes and one long one, the opening rhythm of Beethoven's Fifth Symphony was the hallmark of the BBC's foreign broadcasts during the war and thus of its resistance to the Germans. In Morse code, the lengths of each sound stand for the letter V, as in "Victory."

The Jewish music student Fania Fénelon of Paris was aware of this political symbolism when she was imprisoned in the Auschwitz concentration camp and arranged the Fifth Symphony for the "Girl's Orchestra." In her book of the same name, the Holocaust survivor writes that it filled her with schadenfreude that the administrators of the concentration camps were not aware of this meaning. 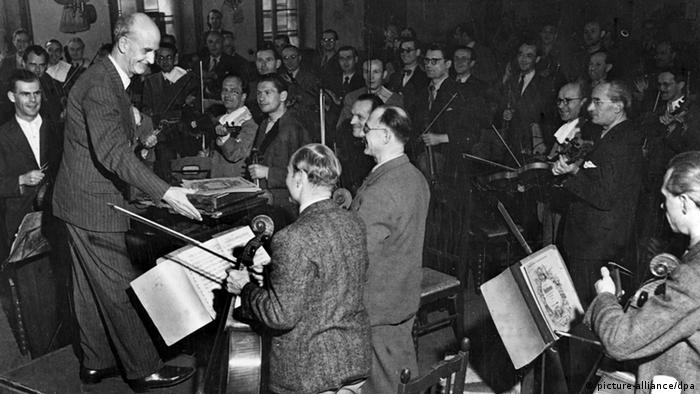 After the war, Wilhelm Furtwängler was able to return to his profession and greeted his orchestra, the Berlin Philharmonic, in 1947

Debate over Beethoven in East and West

In the first years after the end of the war, an ideological dispute broke out between East and West Germany over the right to claim Beethoven's music for themselves. In the GDR, Beethoven was seen as a pioneer of socialism. "They said that Hitler had been defeated with the help of the Red Army, and that they were therefore allowed to utilize that which is peaceful and European in Beethoven's music," explains Michael Custodis.

West Germany was caught up in the Allies' denazification process, which conductor Wilhelm Furtwängler also had to face. In 1942, on Hitler's birthday, he had conducted Beethoven's Ninth Symphony with the Berlin Philharmonic Orchestra. "As of 1948, the Berlin Philharmonic Orchestra went on tour again with Furtwängler, directly to England, and it was declared part of a peace project," said Custodis. Despite heated debates about Furtwängler's role in the Third Reich, the concerts were sold out and the music reviews were overwhelming. People wanted to see music and politics separated again.

Beethoven's Ninth at the service of politics 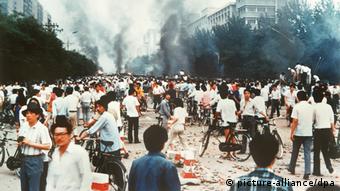 After the war, Beethoven's Ninth Symphony was politically appropriated in a particular way around the world. The rulers of the former apartheid regime of Rhodesia, now Zimbabwe, used the Fourth Movement as their national anthem in the 1970s. Under the military dictatorship in Chile, women demonstrated with the Ode to Joy for the release of political prisoners. In June 1989, students in China sang the ode during their protests in Tiananmen Square.

Leonard Bernstein conducted the Ninth in 1989 on the occasion of the fall of the Berlin Wall. Politicians sang the Ode to Joy throughout the reunification. Beethoven's Ninth Symphony is also the European Union's anthem, with its values of freedom, peace and solidarity.

Nevertheless, at the opening of the Beethoven Year 2020, Federal President Frank-Walter Steinmeier warned that great art is needed, but that it can also be misused — just as Beethoven was appropriated by the National Socialists to portray a superior 'German being.' "This also reminds us to remain cautious of excessive, unreflective pathos," he said.

All about Beethoven, in and out of the anniversary year