Fans and human rights activists have frequently criticized Bayern Munich for its business dealings in Qatar. Ahead of its AGM, the club has now rejected a motion to add a human rights clause to its constitution. 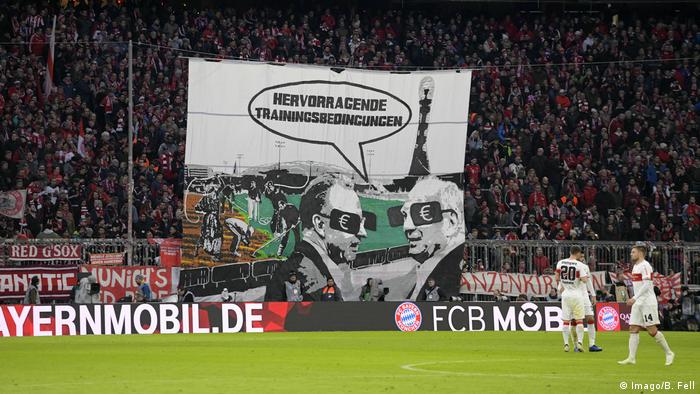 As Bayern Munich members gather for the club's annual general meeting (AGM) in Munich's Olympiahalle on Friday evening, one topic will not be on the table: a clear club commitment to human rights.

According to documents seen by German public broadcaster ARD, Bayern's executive committee has rejected a motion submitted by a member to add a line to the club constitution that would have required the club to commit itself to United Nations (UN) human rights principles.

The motion, submitted by a Bayern Munich member on October 11 on the basis of the club's social responsibility and function as a role-model, proposed an additional clause in the "Purpose and Responsibilities" section of the club's constitution which would have read: "The club is committed to upholding human rights in accordance with the United Nations Guiding Principles of Business and Human Rights and is committed to protecting these rights."

The line refers to a 2011 UN framework intended to enhance standards regarding business and human rights.

According to communications seen by ARD, Bayern's executive committee decided not to raise the motion at the club's AGM due to a "lack of admissibility." The club says that it, as an organization, "neither falls under the category of a state" nor under that of a "commercial enterprise in the sense of these guiding principles."

Both ARD and DW have approached Bayern Munich for comment. 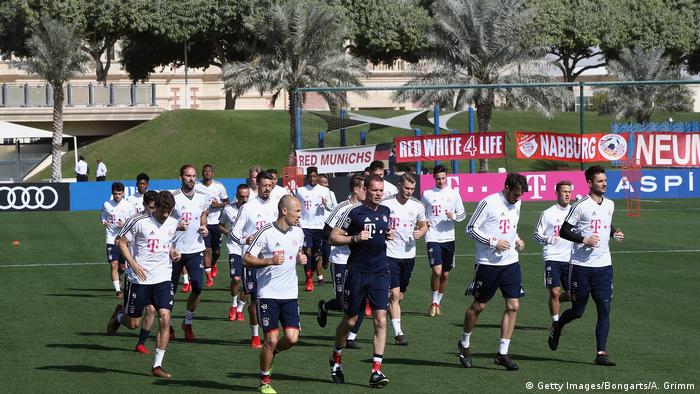 Bayern Munich players during a training session at the ASPIRE Academy in Doha, Qatar

Human rights activists have frequently criticized the club for its business dealings with Qatar, which has been condemned for its alleged use of slave labor in its preparations for the controversial 2022 World Cup.

This winter however, Bayern will make their 10th annual training trip to the small Persian Gulf state during the Bundesliga's winter break, and the club has partnered with Doha Airport and state airline Qatar Airways in recent years.

Bayern Munich supporters have also raised the issue at past AGMs and regularly protest against their club's ties to Qatar in the form of banners and displays at matches. One flag, pictured above during a game against Stuttgart, depicted out-going club president Uli Hoeness and chief executive Karl-Heinz Rummenigge talking about "fantastic training conditions" in Qatar, while workers are whipped in the background.

Hoeness, who is to be replaced by former Adidas CEO Herbert Hainer at Friday's AGM, has said that Bayern needs the sponsorship it receives from Qatar to keep up with other top European clubs, particularly those in the English Premier League.

What's more, CEO Rummenigge believes that Qatar has responded to public criticism when it comes to human rights, telling Munich's Abendzeitung newspaper in January 2019 that there has been a "positive development in the legal situation of immigrant workers" and "improvements in workers' rights."

'Pocket the money and keep quiet'

In response to the motion's rejection, the Bayern Munich fan group Munich's Red Pride, which has protested against club leadership in the past, said that human rights abuses should be condemned by the club.

"It should be self-evident that Bayern Munich, as a prominent flagship club, should clearly and unmistakably acknowledge human rights. Unfortunately, the club's engagement with Qatar shows that the opposite is true," the group said in a statement to DW.

"The serious abuses of human and workers’ rights which have been documented there ought to be condemned by the club, loud and clear. Instead, it's a case of: pocket the money and keep quiet."

Qatar is preparing for the World Cup 2022