Bayern Munich have jetted off to Qatar for a training camp to prepare for the second half of the season as they seek to defend their Bundesliga title. All but three German clubs are holding their camps abroad. 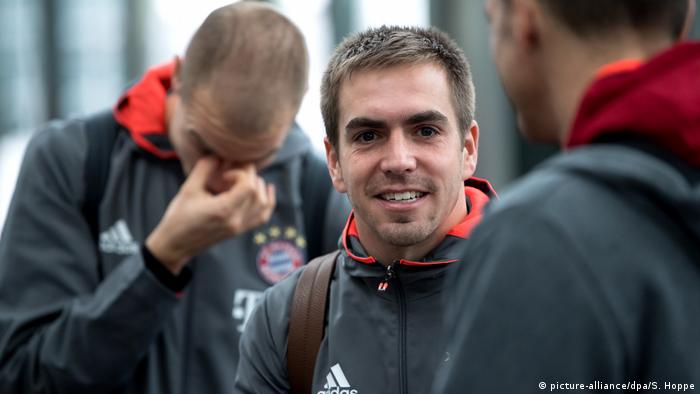 The defending Bundesliga champions headed off to their training camp on Tuesday less than two weeks after they wrapped up their 2016 schedule with one of the few games this season in which they really appeared to be firing on all cylinders - a 3-0 victory over their closest challengers, Leipzig.

"We wanted to send out a signal at the end of the year. It was the right signal at the right time. It is always important for us to enter the winter break in first place," Bayern's captain, Philipp Lahm (pictured above), told reporters before their flight departed for Qatar.

Lahm, 33, conceded that so far his team, in their first season under head coach Carlo Ancelotti, had not been as consistent as they would have liked to be and said that in the second half they needed to allow fewer chances and create more going forward.

"It must work out better although it always worked out very well at times in certain games," he said in an apparent reference to the Leipzig match.

Ancelotti will be able to work with an almost compete squad in roster, with the only notable absence being central defender Jerome Boateng, who is to remain in Munich as he recovers from chest surgery. Winger Kingsley Coman traveled with the team, but he will work individually as he recovers from a knee and ankle injury.

Also not on the flight was Ancelotti's longtime assistant, Paul Clement, who was given permission to travel to Swansea to finalize the details of his contract as the new head coach of the Premier League team.

"Paul has been a professional, loyal and capable coach for us. We did not want to stand in his way of becoming a manager in the Premier League. We wish him all the best for the future," Bayern's chairman, Karl-Heinz Rummenigge, said in a statement, which also announced that Hermann Gerland would be Ancelotti's new top assistant coach.

Leipzig, who could be on their way to posing the biggest challenge that Bayern have seen for the title in years, head to their training camp in Portugal on Wednesday.

In previous years many Bundesliga clubs held their winter camps in Turkey, but this year they are avoiding the country due to the political situation and concerns about security. The largest number this year, 10, have opted for Spain.

Three clubs, Cologne, Ingolstadt and Hoffenheim are not planning to travel abroad for their training camps this winter. However, Cologne have not ruled out a change in plans if the weather in the Rhineland region of western Germany becomes particularly cold or snowy over the next couple weeks.