In the final action before the winter break, dominant Bayern crushed 10-man Leipzig, Hertha beat Darmstadt and Hoffenheim were held by Bremen. Cologne and Leverkusen shared the spoils and Freiburg beat Ingolstadt. 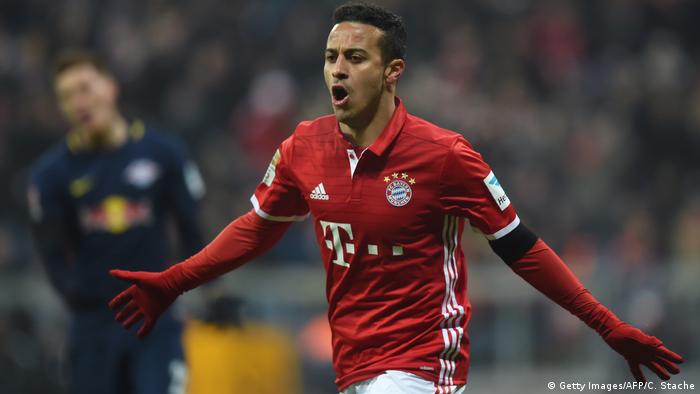 Bayern sent a strong message that they are far from ready to surrender their German league title with a crushing victory over upstarts Leipzig.

It was a clash of the team with the highest average age in the Bundesliga (Bayern 27.9) and the youngest (Leipzig 24.1) and the champions showed at a packed Allianz Arena that experience counts when the chips are down.

After Douglas Costa had struck a post, there was a slice of luck about Thiago Alcantara’s opening goal for Bayern in the 17th minute.

Robert Lewandowski’s first-time shot from Philipp Lahm’s cross cannoned back off the goal frame and Thiago was on hand to bundle the ball over the line.

Thiago then turned provider for Xabi Alonso, laying the ball into the path of his Spanish compatriot, who sent a precise shot past Leipzig goalkeeper Peter Gulacsi.

Leipzig’s hopes of an unlikely comeback were effectively snuffed out by a moment of madness from Emil Forsberg after half an hour.

The Sweden winger slid in on Lahm from behind and caught the Bayern captain painfully on the heel, earning a straight red card.

With a man extra, Bayern quickly pressed home their advantage and Lewandowski made it 3-0 from the penalty spot shortly before halftime. 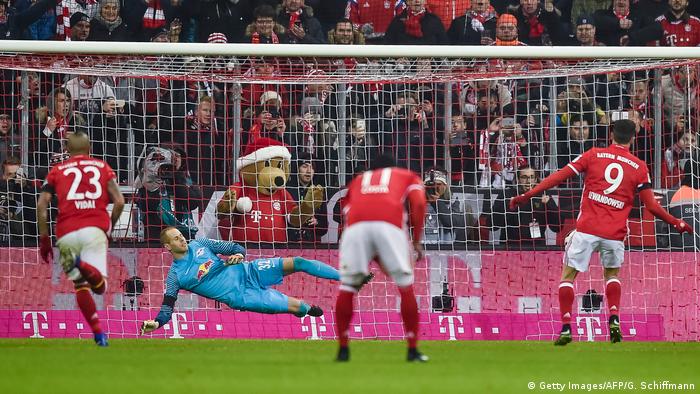 Lewandowski makes it 3-0 to Bayern from the spot

Gulacsi had come out to claim the ball from the onrushing Costa but only managed to bring the Brazilian down on the edge of the area.

Bayern eased off in the second half and head off on holiday with a three-point advantage over second-placed Leipzig at the top.

Hertha fans had to deal with heightened security at the Olympic Stadium following Monday’s deadly truck attack on a Christmas market.

Their players earned a morale-boosting win after consecutive defeats and Pal Dardai’s side climb to third, six points behind Leipzig, while Darmstadt stay rooted to the bottom.

Marvin Plattenhardt opened the scoring with a superbly struck left-foot free kick early in the second half. The defender has scored six goals in the Bundesliga, all from direct free kicks.

He used his trusty left leg to great effect again just after the hour, swinging the ball across for Salomon Kalou to nod past Michael Esser in the Darmstadt goal.

Sandro Wagner continued his fine run of form to fire outperforming Hoffenheim ahead midway through the first half.

Kerem Demirbay sent across a low centre and Wagner poked the ball past Bremen keeper Jaroslav Drobny from close range.

Serge Gnabry finished off a well-worked Bremen move to earn a point for the visitors.

The only team still yet to lose a game this term, Hoffenheim are fifth on 28 points, one behind Frankfurt, while Bremen are one place above the relegation places on 16 points.

Cologne pulled ahead in the Rhine derby thanks to their prolific French striker Anthony Modeste and his 13th goal of the campaign was one of his best.

Frederik Sörensen crossed from the right and Modeste beat his marker to the ball and hooked it high past Bernd Leno in the Leverkusen goal.

The visitors were level a minute before the break when Wendell exchanged passes with Kai Havertz and beat Thomas Kessler with an angled shot.

Cologne are seventh on 25 points, four ahead of ninth-placed Leverkusen, who are through to the last 16 of the Champions League to play Atletico Madrid.

Florian Niederlechner scored the first double of his Bundesliga career to secure three points for eighth-placed Freiburg at strugglers Ingolstadt.

Marcel Tisserand tripped Vincenzo Grifo to concede a penalty and Niederlechner confidently put away the spot kick to open the scoring.

His second came after a clever header from Janik Haberer and the 26-year-old striker picked his spot and cracked the ball low into the corner.

Ingolstadt, who are second from bottom, pulled a goal back early in the second period when Markus Suttner curled in a free kick.

Dortmund held by Augsburg at home

In their final outings before the winter break, there were wins for Wolfsburg, Frankfurt and Hamburg, while Dortmund were held by Augsburg. A minute's silence was held for the victims of the Berlin attack before kickoff. (20.12.2016)

The attack on a Berlin Christmas market has forced the police to consider whether more needs to be done to secure Bundesliga stadiums. A minute's silence to remember the victims is to be held at this week's matches. (20.12.2016)