Bavaria's conservatives have agreed on a list of changes they want made to the government's refugee policy. However, party leader Horst Seehofer is seeking to avoid a confrontation with Chancellor Angela Merkel. 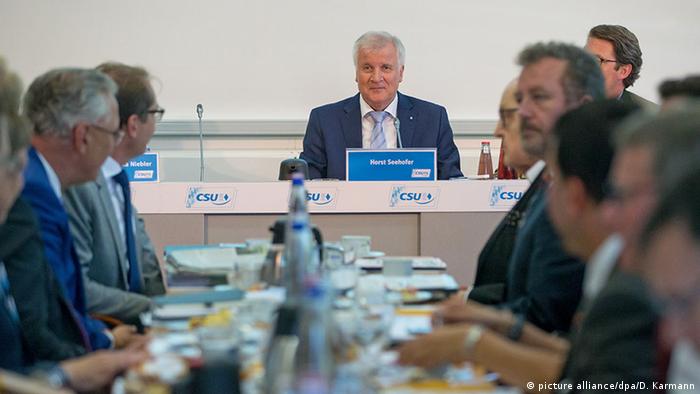 The Christian Social Union (CSU), Bavaria's sister party to Merkel's Christian Democrats (CDU), on Friday agreed on a catalog of changes it wants made to the government's asylum policy.

At a closed meeting, members of the CSU's chief executive agreed on measures including an upper limit for the number of refugees that Germany accepts each year.

Seehofer stressed the CSU was eager to resolve its differences with the CDU, underlining the importance of the alliance between Germany's conservatives. "I want this union to succeed," Seehofer was reported as saying, while adding that there should be no whitewashing over policy disagreements when it came to migration.

The party leader said a new approach was needed, according to some of those present at the meeting. "We now need clear reliable rules for immigration for the future," the sources were quoted as saying.

Opinion: Angela Merkel and Horst Seehofer - a lost cause

Merkel's words have fallen upon deaf ears in the CSU, whose party line appears to be more radical than the AfD's. It's heating up to be an interesting weekend of politics in Germany, writes DW's Kay-Alexander Scholz. (08.09.2016)

"Without limits we cannot do this - that is my deepest conviction," Seehofer was quoted as saying, a pointed reference to Merkel's "we can do this" assertion over the refugee crisis.

While the CSU was not an opponent of the CDU, Seehofer stressed, it also needed to maintain a political profile of its own. Seehofer has linked Merkel's migrant policy to the CDU's poor showing in state elections in Mecklenburg-Western Pomerania, where the political union was beaten into third place by the anti-immigrant Alternative for Germany (AfD).

The CSU executive agreed on an upper limit of 200,000 refugees per year as part of its catalog of demands in the run up to Germany's general election in 2017.

However, after criticism from the CDU, the CSU executive did agree to relent on a demand that applicants with Christian backgrounds should be given precedence. This, it was decided, should only apply to regular immigration and not to refugees seeking asylum.

During the session, Seehofer was said to have stressed the importance of kinship with conservatives in the rest of Germany - and of togetherness with Merkel. However, he was reported to have cautioned that the notion of unity could only be stretched so far.

"We want to win with you, but we do want to win - and the second part is the most important," Seehofer was quoted as saying.

While he did not express direct support for Merkel to again be the CSU's choice as candidate to be chancellor, Seehofer ruled himself out of the running. "I have no intention of being a candidate for the chancellorship," he said, adding that no one - himself included - was irreplaceable.

Germany's tabloid newspaper "Bild" reported on Thursday that many branches of Seehofer's party were insisting that aspirants for federal electorates would promise not to back a Merkel candidacy in 2017. Rhetoric against Merkel and refugees was "festering" in Bavarian CSU branches, "Bild" reported, with the campaign led by the CSU's leading youth representative Hans Reichert.

Further demands to be set out

The CSU's executive was also to meet on Saturday to clarify demands ahead of a meeting between Merkel and Seehofer on Sunday. The two were to talk before a first meeting with Sigmar Gabriel, the leader of junior coalition partners the Social Democrats (SPD).

Katarina Barley, general secretary of the SPD, said the CSU paper was aimed at "sabotaging" the government and an "open attack" on Merkel.

The CSU also proposed an "immigration limitation law," a ban on body-obscuring burqas, rejection of dual nationality in Germany and fast deportation of rejected asylum applicants at the border. The draft also rejects "special swimming times for Muslims" and visa liberalization for Turks included in the recent EU-Turkey deal. The proposals also include a demand that "after cessation of the grounds for [refugee] flight, rigorous repatriation must follow."

Bavaria, which has found itself as the first point of entry for many migrants, has been particularly hard-pushed to deal with the influx - particuarly when the number of new arrivals was at its height last year.

Coronavirus: Austria and Denmark break ranks with EU on vaccines 5h ago