Police in Bavaria are looking for a 2-meter wooden penis sculpture that has become a celebrated local landmark in recent years. The phallus landmark, the origins of which remain a mystery, disappeared over the weekend. 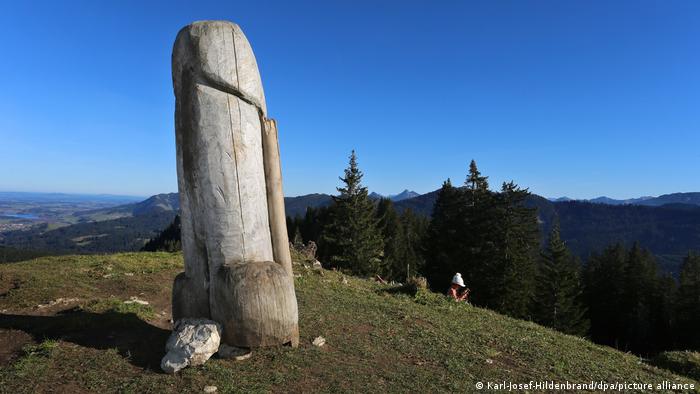 Police in southern Germany say they are investigating the disappearance of a phallus-shaped wooden sculpture from a mountaintop, but that they are still not sure whether a crime has been committed.

The 2-meter-tall (almost 7-foot) object has grown in fame since it appeared overlooking the Allgäu region on the slopes of the Grünten, a mountain near Germany's border with Austria.

It provided a popular photo opportunity for walkers and gained widespread attention on social media — even attracting the moniker "Guardian of the Allgäu."

The phallus sculpture, which was still in place as late as Saturday evening, had a local beer named in its honor and was listed as a cultural landmark on Google Maps.

However, in the dead of night leading into Sunday, the timber landmark went missing.

Local newspaper the Allgäuer Zeitung reported that the sculpture appeared to have been chopped down over the weekend. The only sign that the 200-kilogram (440-pound) sculpture had ever been there was a pile of sawdust.

The mayor of the nearby town of Rettenberg, Nikolaus Weissinger, lamented the disappearance, which came two weeks after the monument attracted media attention for having toppled over.

"It's a real shame," Weissinger was quoted as saying by the Allgäuer Zeitung.

German news agency DPA said police in the Bavarian town of Kempten was investigating the disappearance. However, police said that given that the original owner was unknown, it was unclear whether there could be a prosecution.

"We don't know if it amounts to a criminal act or not," said a police spokesman.

According to local lore, the sculpture was made as a joke birthday present for a young man. However, his family didn't appreciate the gift, and found a new home for it high in the hills.