Thieves have removed a mournful painting by the mysterious British artist from an emergency door at the Bataclan concert hall. The work was an homage to those killed during the coordinated 2015 terror attacks in Paris. 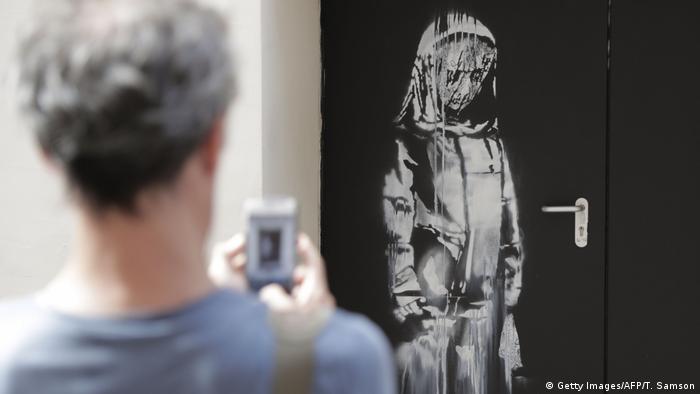 A memorial painting by artist Banksy has been stolen from the Bataclan concert hall, where 90 people were killed in the coordinated 2015 Islamist terror attacks in Paris, the venue announced Saturday.

The painting, which had been attributed to the famed anonymous street artist when it appeared last June, depicted a veiled female figure in a mournful pose with a downcast expression. It had been stenciled in white onto a black emergency door.

"We are today filled with a deep sense of indignation. The work of Banksy, a symbol of contemplation belonging to all — residents, Parisians and citizens of the world — has been taken from us," the Bataclan said in a tweet showing the artwork alongside its message.

On November 13, 2015, the Bataclan was stormed during a concert by militants who opened fire in the hall, killing 90 people. A total of 130 people died during the coordinated attacks that took place in Paris that night.

The Banksy work was reportedly stolen from Friday night into Saturday by a group of thieves who used electric tools to cut away the door and load it into a van.

Various other street paintings attributed to Banksy popped up last June throughout the French capital, and some have since been vandalized.

Last October, Banksy caused a sensation when one of his paintings began shredding itself in front of an auction-house public after having just been auctioned off for $1.4 million.

Barry Cawston's latest project has brought him a step closer to the world's most mysterious street artist. Rachel Stewart spoke to the British photographer about blurring the lines between Banksy's art and reality. (23.03.2018)