A German NGO granted three "northern outposts" that "face a potential vulnerability" next to Russia the peace prize on Saturday in Münster. The award recognizes the states’ efforts in supporting European integration. 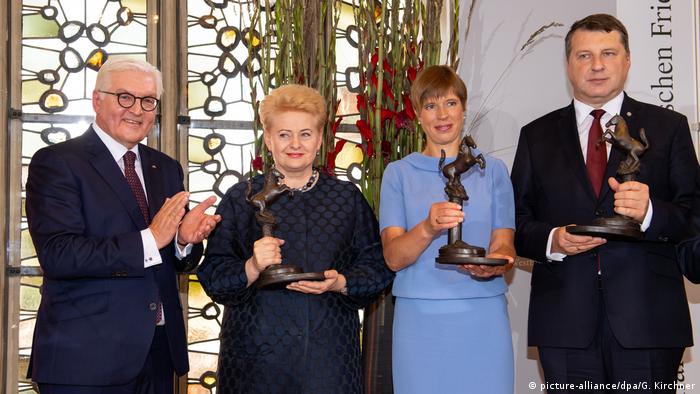 German President Frank-Walter Steinmeier was on hand to award the prize commemorating the Peace of Westphalia, which ended the Thirty Years' War and ushered in a new era of diplomacy and co-existence between neighboring sovereign states. The presidents of the Baltic states – Kersti Kaljulaid of Estonia, Dalia Grybauskaite of Lithuania and Raimonds Vejonis of Latvia – received the award on behalf of their countries at the award ceremony in the western German city of Münster.

In a nod to this week's NATO summit in Brussels – at which US President Donald Trump antagonized German Chancellor Angela Merkel and UK Prime Minister Theresa May – Steinmeier highlighted the Baltics' strategic importance for the bloc's unity against threats from Russia. Addressing the leaders of the three tiny northern European nations, he said "They know: only together we are strong... We need each other as partners and friends. That is their and our conviction. Our joint hope remains that this will not be forgotten on the other side of the Atlantic."

With this year's award, the jury of a German organization that promotes peaceful dialogue is honoring the Baltic States' special efforts towards supporting integration in Europe.

"Due to their exposed position as northern outposts of the EU, Estonia, Latvia and Lithuania face a potential vulnerability. It is therefore only natural to appreciate and strengthen these states because of their special efforts in supporting integration in Europe," said Reinhard Zinkann, chairman of the Economic Society for Westphalia and Lippe e.V., which awards the prize.

Jost Springensguth, the award's co-founder, said that after travelling to the three countries, it was clear "that they have become a stable element in Europe. Within 20 years they have made such a firm commitment to independence, to freedom and have chosen a path to democracy, that we want to recognize these worthy prize winners, which fit exactly to our times. And especially in Europe's current situation one cannot send a better signal."

The timing of the award is no accident. One hundred years ago, Estonia and Latvia were founded as states and Lithuania had its statehood restored. Springensguth also remembered the so-called "Baltic Way," in which millions of Estonians, Latvians and Lithuanians formed the largest human chain in history in 1989. They were demonstrating for independence, freedom and the road toward being part of European democracy.

Estonia, Latvia and Lithuania were not the only former Eastern Bloc countries to join the EU in 2004. But their European integration seems to have been more radical and straightforward. Unlike other younger EU member states, for example, all three followed strict austerity courses and posted such positive economic data that, combined with the political will toward economic integration, they were able to introduce the euro.

The Baltic countries' digitization efforts also serve as role models for many of the more established EU states, including Germany. And, unlike Poland and Hungary for example, the rule of law is also considered exemplary in the Baltic states. Springensguth calls them "model countries" in terms of democracy, economic development and digitization.

The respective EU Council presidencies are also "proof of the active role they take for Europe, how they stabilize Europe, even in this exposed situation" on the border with Russia. "Conflict scenarios appear to be back in the realm of the imaginable," says the organization on its website. "Since the three countries with a total population of 'only' around six million people would, in any case, be militarily vulnerable, the focus of common foreign policy interests is the permanent integration in the EU and NATO."

Springensguth sees "a great thoughtfulness" in the three countries; they place "great value on integrating themselves very intensively in Europe so as not suddenly to become the pawn of world powers again."

The International Peace of Westphalia Prize is awarded every two years and commemorates the peace agreement that was signed in Münster and Osnabrück at the end of the devastating Thirty Years' War that broke out exactly 400 years ago. The prize was first awarded in 1998, the 350th anniversary of the end of the Thirty Years' War. At €100,000 ($117,000), it is the highest-endowed German peace prize, and is awarded to individuals, groups and states particularly committed to European integration.

The three Baltic states have agreed to tighten entry restrictions for Russian nationals. Meanwhile Vladimir Putin has admitted that the sanctions are having an effect. DW rounds up the latest.