The Gulf kingdom accused Tehran of being behind an oil pipeline fire that it termed a "terrorist act." Iran rejected the claims as "false talk and childish accusations." 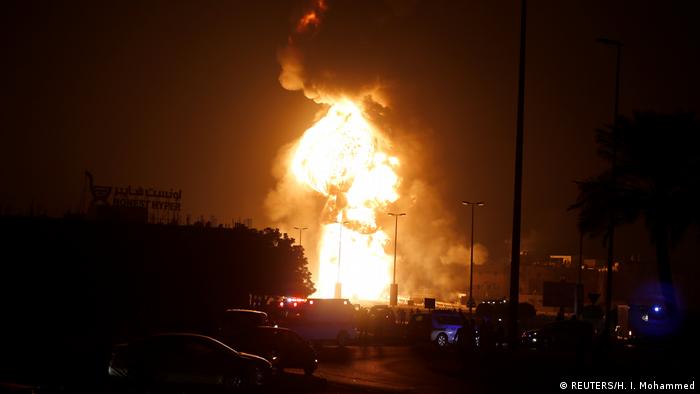 Bahrain said the explosion on its main oil pipeline on Friday was a result of "terrorist sabotage," linked to its arch-enemy Iran, who the Sunni-ruled Gulf kingdom blames for fanning unrest in the country.

"The incident was an act of sabotage and a dangerous act of terrorism aimed at harming the higher interests of the nation and the safety of the people," the interior ministry said on its website.

"Terrorist acts witnessed by the country in the recent period are carried out through direct contacts and instructions from Iran," the statement quoted Interior Minister Sheikh Rashid bin Abdullah al-Khalifa as saying.

In Tehran, a spokesman for the Iranian foreign ministry on Sunday rejected the accusations.

"Obviously, the only thing Bahraini officials have learned to do after each incident in the emirate is to accuse Iran," Bahram Ghassemi said.

"The era of childish accusations and lies is over," he said, adding Iran wanted "the stability and security of its neighbors."

The allegations come at a time when tensions in the region have escalated following the "mysterious" resignation of Lebanon's Prime Minister Saad Hariri last week.

Regional rivals Sunni-ruled Saudi Arabia, a Bahrain ally, and Shiite-dominated Iran have traded barbs, accusing each other of destabilizing Lebanon.

The Saudis have also blamed Tehran for a ballistic missile fired by Yemen's Shiite rebels that was intercepted near Riyadh. Iran has denied any involvement.

Bahraini authorities said they had brought the fire at the oil pipeline under control. The pipeline is used to transport much of Bahrain's oil supplies from the Abu Safa oilfield that it shares with Saudi Arabia.

State-run Bahrain Petroleum Company (Bapco) on Sunday said it had fixed the pipeline, which would allow oil to flow back into the country.

Residents close to the incident near Buri village, some 15 kilometers (10 miles) south of capital Manama, were evacuated to a safe shelter, Bahrain's interior ministry said.

Saudi Arabia has increased its security precautions at all its facilities in response to what it termed the "attack on the pipeline."

Bahraini security forces have been targeted by deadly bombing and shooting attacks that Manama blames on Tehran, a charge that Iran refutes.

In response, Bahrain has cracked down on dissents. It has jailed hundreds of protesters and stripped many high-profile activists and clerics of citizenship.

Activists have accused the authorities of discriminating against Shiites. The government denies the charge.

Bahrain has executed by firing squad three Shiite men convicted over a 2014 bomb attack that killed three policemen. Activists warn that civil unrest could ensue in the Gulf state, which hosts the US Navy's 5th Fleet. (15.01.2017)

Bahrain has ordered the closure of the country's main secular opposition group. Rights groups described the move as the latest crackdown on all opposition voices. (01.06.2017)